Within the Darkness (2016) - Horror Film Review The set-up for Jonathan Zuck directed Within the Darkness is nothing new, and I have been guilty recently of moaning about films that follow a tried and tested formula to a generic dead end (Before I Wake). However I really enjoyed my time with this one, the icing on the cake being how it all winds up in the finale, it was something unexpected, and despite some flaws this film was successful as a horror.

Austin (Dave Coyne - V/H/S/2) is a wannabe star who has decided to create a ghost hunting show that he is to be the host of. Along with his girlfriend Lucy (Erin Cline), cousin Bruce (John C. Bailey), best friend Jesse (Tonya Kay), and spirit medium Megan (Shanna Forrestall - The Last Exorcism) he heads to a property that has stood empty since a family were found dead there in mysterious circumstances many decades previously. Austin intends to fake the whole ghost hunting experience in order to make his show seem exciting, he has no belief in ghosts, however it soon turns out that the property is in fact very haunted, and that the group may be in well over their heads... 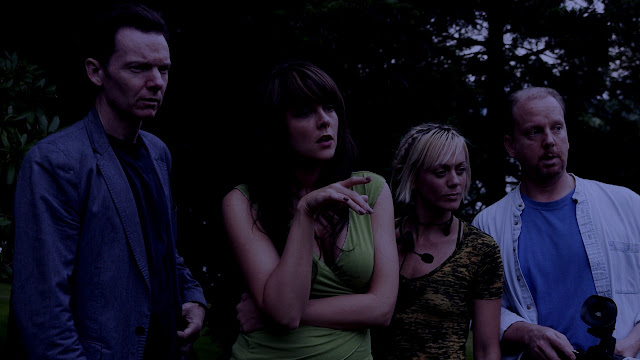 So the format is similar to many others films but I found this to be a pretty good film. The actors were a lot better than I expected them to be which was a treat I didn't expect for what is an indie film. I also liked in terms of characterisation how situations between the cast were inferred but never explicitly stated. There is a lot of sexual tension between Austin and Jesse for instance that hints at them possibly having an affair, yet nothing happens at all to explicitly suggest they are anything but good friends. Austin is a bit of a creep who only really cares about himself, yet this restraint in the way this subplot is handled felt pretty mature. The complete flip side of this though is the really quite unnecessary female nudity on show here. Both Lucy and Jesse have scenes where they are naked and almost everything is shown, yet neither scene felt at all necessary and added nothing to the plot. There is an early sex scene between Austin and Lucy for instance that felt slotted in for no good reason other to show how self centered Austin is as a person.

I was having a fun enough time watching Within the Darkness but then the big twist for the ending occurred, with elements of Black Mirror this was something I didn't expect in the slightest, it felt quite meta and almost fourth wall breaking in how it plays out. Up to that point there were some moments of pretty cool horror, an effective vibe was given to the property to make it feel a bit creepy, again helped by the great performances. There is a constantly effective feeling of events spiralling out of control with characters constantly getting freaked out and terrified. This takes place over two different nights which allowed for a little downtime in between the big scenes of horror, a concept I always enjoy. This may be the traditional story of fake ghost hunters discovering real ghosts but it is handled well. 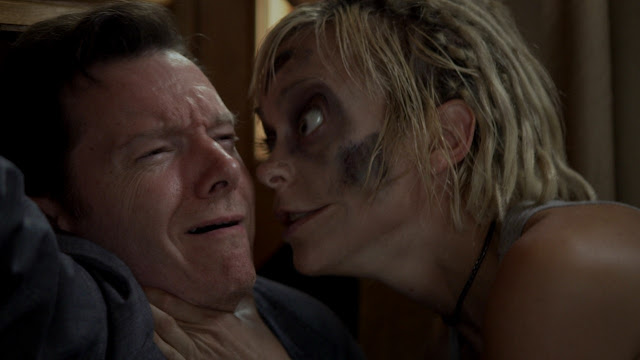 The actual on screen horror when it comes has a reliance on CGI, but it was interesting in how it was implemented despite not being the best quality. Aside from pretty dreadful looking black smoke you get characters whose facial expressions get bizarrely distorted, an effect I don't often see used. The recurring image of a woman in a white dress who pops up and vanishes in the background at several points was an effective touch, and a part when a character gets possessed felt creepy. I did sometimes feel that the night scenes were a little too dark to tell what was going on, and the soundtrack seemed to be a little too high with the bombastic dramatic music almost (but not quite) drowning out the dialogue and sound effects at several points.

While Within the Darkness displays its low budget on its sleeves it was a fun horror that never takes itself too seriously, the fact that it decided to pull a late twist that actually surprised was entertaining, and the way it handles the interactions between characters meant you had a variety of flawed humans who nonetheless never became irritating. I didn't expect much from this yet came away quite pleasantly surprised.