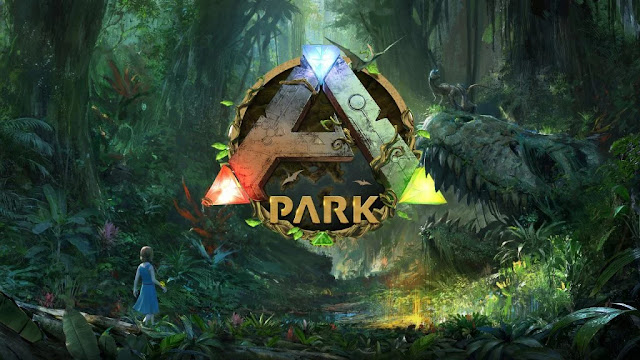 I had a list when I first got my PSVR of exactly the type of things I wanted to experience. I wanted to be scared, to go into space, and to fly like a bird. I have done all those things, but when I heard about ARK Park I realised I should have added walking with dinosaurs to that list. ARK Park is a spin off of ARK: Survival Evolved which as far as I can tell is a survival game that has is full of dinosaurs. Now this is game is playable in multiplayer too, however I don't know anyone who has that so this review is based on my time with single player only.

In this game you play as a visitor to a Jurassic Park style theme park island that is full of dinosaurs. After riding the monorail you go to the visitor centre, then onto the park proper where you can visit a series of different areas in order to gather resources, as well as help defend a robot that is repairing special machines that keep the various dinosaurs docile. 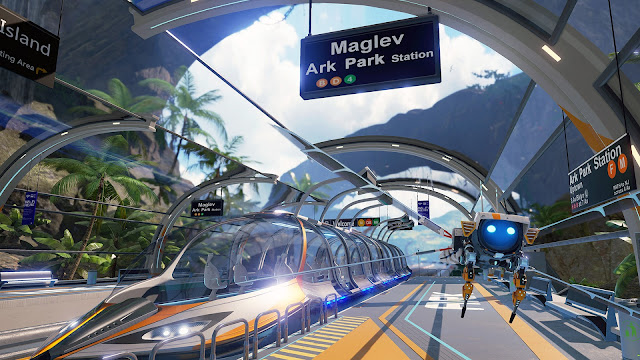 This is a game that starts to show more and more cracks the deeper you get into it, in fact the first hour of this is the best as there is a lot of excitement and wonder. However with each passing hour you begin to realise just how shallow this experience ultimately is, and it soon sets within you a kind of desperation to find more stuff to do. It starts off fantastically with a wonderful tutorial that has a flying robot guide you through the basics of the game. You are introduced to the controls, and then take a really fun train ride over to the visitor centre. The centre lets you play around with some static dinosaurs, feeding them, looking at them, and activating the different animations they have. It was a lot of fun getting to see all these creatures up close, with some such as the T-Rex being quite imposing due to their size in relation to you. The tutorial takes you through the basics of gathering resources before taking you to one of the shooting missions.

After this great tutorial I was excited for the game proper. It is here you begin to realise just how unfocused this is. You are left to your own devices to find your own method of having fun. I started by going to the five different locations to get resources. Each one unlocks upon having seen all the previous one has to offer. Each area is set in a different part of the park, such as swampland, a cliff top, or forest. You have gloves that can be equipped to search bushes, while an axe can be used to break open rocks and cut down trees. These resources are then used to unlock different items such as machine guns, a compact bow, a gun turret, and different types of axes and other such tools. While the areas are fun to go to initially they always play out the exact same way with dinosaurs doing the exact same thing each time. Most fun of these was a jeep that you can ride in, I did this one several times just for the enjoyable ride. You have a scanner that lets you collect DNA of the dinosaurs you meet, and different ways of finding the beasts, such as luring them with fruit, or pulling down vines. 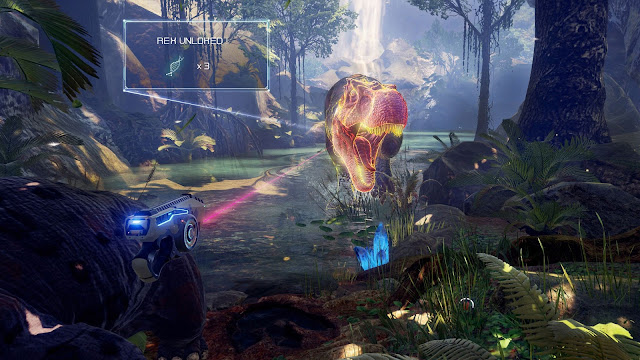 The other main part of the game is the shooting challenges. There are five of these taking place over two different locations at different times of day. A flying robot fixes a big machine while you protect this machine from being destroyed by waves of different dinosaurs. Starting off with a pistol these are made easier by building new weapons. Each of these places end in a boss fight, such as against a giant white ape, or a charging T-Rex. The shooting isn't amazing but works fine enough, especially once you are duel wielding machine guns. This leads up to the PSVR version of the games biggest problem; the clunky controls.

There is no free movement available, instead you have to teleport everywhere with the Move controllers letting you turn on the spot. Movement was easy to get to grips with but the lack of free moving did give ARK Park a bit of a static feel. Less forgiving is the sometimes hateful inventory screen that sees your avatar refusing to put away tools and weapons. A very frustrating case in point is to follow. I had saved up for a gun turret which require you to be holding no items in either hand to use. It was placed on the ground ready for use against the boss for the fourth shooting level. When it come to the pivotal moment to put away my guns and take control of the turret the game just point blank refused to let me unequip the gun from my left hand. I was pressing the correct buttons, I was doing everything as it should have been, yet the janky game wouldn't let me put my gun away. As such I failed the mission, losing my gun turret in the process. It is a fault of the unsuitable Move controllers for sure but it is still a real shame, and I have played plenty of PSVR games where shooting gallery type experiences work with no problem at all. 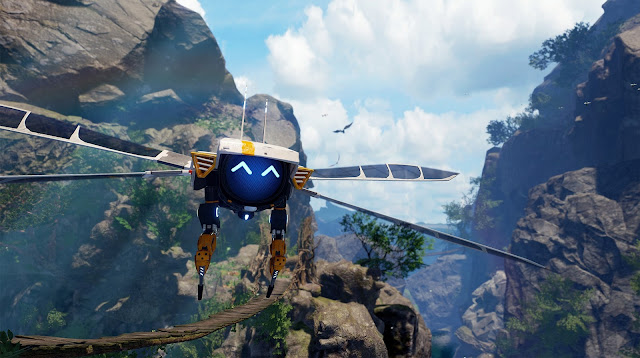 There comes a point when it just seems you have seen everything the game has to offer. If this game was say £10 to £20 then that would not be that bad a thing, it took me around four hours to see everything this had, but currently the game costs £45 on the Playstation store (and around £30-ish pound on the other devices). For that price there just isn't enough content to be found here no matter how fun a time you have. And this is a fun game at times, the different environments are full of life and while the graphics aren't the best I have seen on PSVR they are functional and make you feel you are in a forest. It is hard to be too down on a VR game that lets you ride on the back of a dinosaur (a highlight of my time with the game), but the lack of content coupled with fiddly controls led to a bit of a disappointing feeling. I have heard it said that this could be the No Man's Sky of VR games, that what it will resemble in the future will be far more than what it launched as. While that is all well and good my review has to just cover what there is now, and at this excessive price it is just too hard to recommend to all but the richest of video game players.