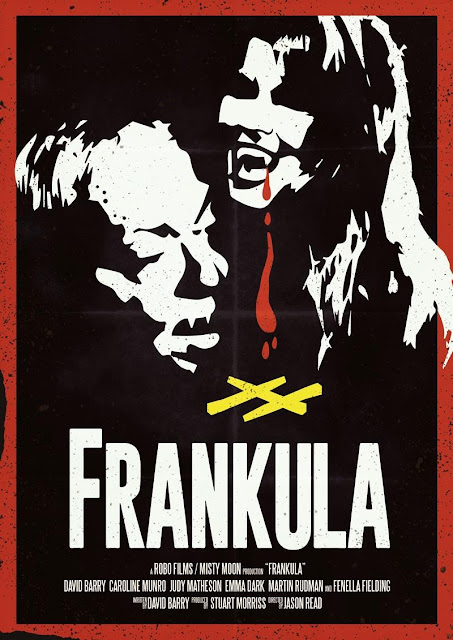 Frankula had little to no meaning to me, that is not because of any sort of lack of quality, more that this is a light hearted spin-off to late 60's/early 70's British sitcom Please Sir! In that show David Barry played pupil Frankie Abbott, Frankula is set in modern day and shows what that character is doing now. I have never seen or heard of Please Sir! so what I guess would be most the comedy is lost on me.

So Frankie Abbott is now in a home being looked after by a carer (Emma Dark - Seize the Night). One day he is led out to a graveyard by Clarissa Cobra (Caroline Munro - Maniac, Dracula A.D. 1972) where he meets Vera Vomit (Judy Matheson - Twins of Evil) and vampire psychiatrist Dr Spritzer (Martin Rudman - Bad Friday), and discovers his carer is actually a vampire also. Is Frankie only dreaming or do evil forces really want to transform him into Frankula?

This is all inoffensive stuff with the horror in low abundance, the closest we get is blood being mistaken for tomato sauce. The vampires are cheesy in that Hammer Horror type of way and was a nice call back to the era this piece is intended to remind viewers of. A lot of the humour was lost on me and I can't really say how much actually knowing who these characters and actors are would add to this. While I didn't find it funny, at seven minutes it had no time to offend, or to drag which is of course a good thing. Frankula is free to watch on YouTube so I will include it below.