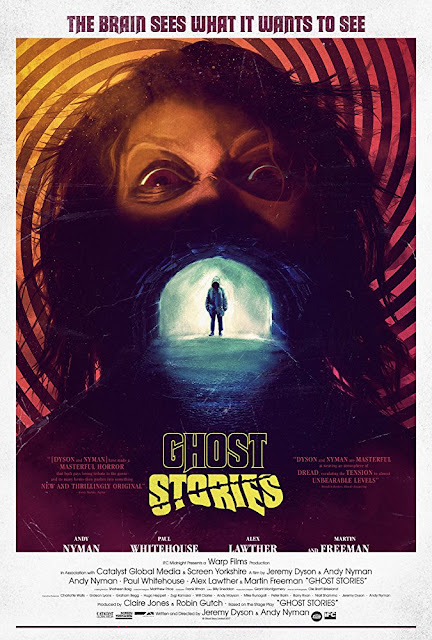 I had been looking forward to British anthology horror Ghost Stories ever since I first saw the trailer late last year. For one thing I adore anthologies, to get to see one on the big screen was going to be a real treat. Secondly it had an interesting cast, I was intrigued how both Paul Whitehouse and Martin Freeman would perform in a horror setting when they are known for comedy, and it was a thrill to see young Alex Lawther would be in it too (best known for the stand out Black Mirror episode of season 3 'Shut Up and Dance'). While there was no doubt this was a chilling film I couldn't help but feel that it never really knew how to end any of its little tales satisfactory.

Professor Goodman (Andy Nyman - Dead Set, and who also co-wrote and co-directed this along with League of Gentlemen's Jeremy Dyson) has spent his life as a paranormal debunker. One day he receives a mysterious package in the post from a legendary paranormal debunker who had disappeared in mysterious circumstances many years previously, and who was the inspiration for Goodman to take up the job himself. This leads to a meeting with the man who reveals he now firmly believes in the supernatural. He gives Goodman three different case files and tells him these were the three cases that he was never able to solve, and dares the Professor to try and solve them himself, warning him they will change his view of the world forever... 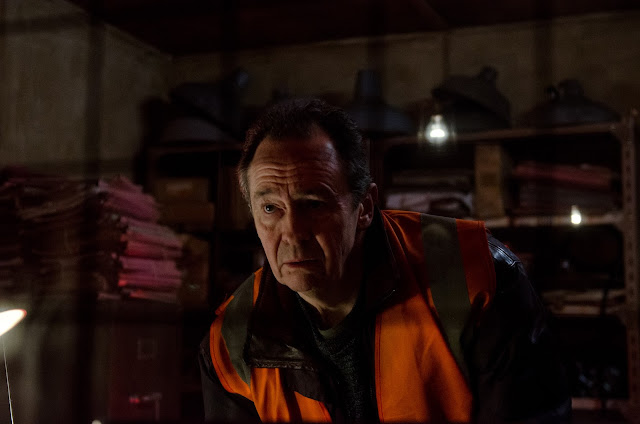 So as with all good anthologies this has a central storyline (that of the Professor exploring the old cases) and then a series of smaller tales. Each story stars one of the principal actors mentioned in my introduction. The first has Whitehouse as night watchman Tony Matthews, he recounts the story of a terrifying encounter he had in a former mental asylum. The second story stars Lawther as nervous teenager Simon who hits a strange creature while driving down a remote woodland road. The final story stars Freeman as Mark Priddle, this one is about an expectant father who witnesses spooky goings on in the nursery he has made for his unborn child. The good news is that all four stories are creepy as hell, and also very weird, you can really feel the League of Gentlemen influence, something Ghost Stories reminded me of even before I knew it was done by Dyson.

The directing really helps in making this film scary, characters are often framed right at the edges of the shot, they become insignificant to the location they are in making you as a viewer start to imagine you can see things that are not really there, or anticipating terror to come at the very least. The night watchman walks off into the background of a shot set in the basement of a mental asylum, only really able to see his torch light off in the distance. A scared Simon looks out his cars side window at the side of a shot that focuses on the rest of the car interior he is not looking at. Time and time again characters are dwarfed by their surroundings and it is a technique that just plain works. There are jump scares here, and a moderate number but more often than not the horror comes from the feeling that something is off, a Twilight Zone feeling of permeating unease. 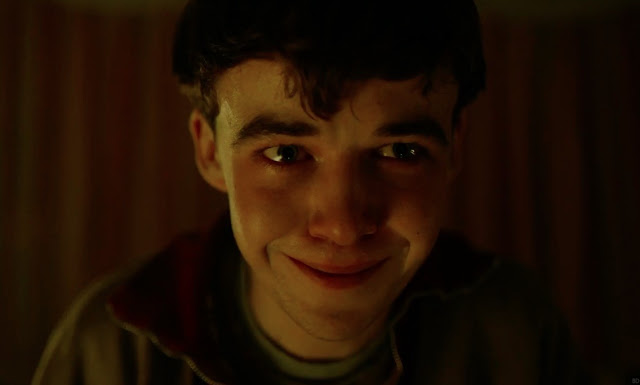 The actors were all good in their roles, Whitehouse was believable as the politically incorrect geezer he played, he had some funny lines but this didn't impact of the fear he displayed as he investigated strange noises at his work place. Lawther was simply fantastic, it is telling that his very best scene doesn't even take place within the confines of his tale, instead the bedroom where Goodman interviews him gives him the space to really come off as unhinged in quite an unsettling way. For whatever reason I have never really enjoyed the acting of Freeman, no fault of him, more that he seems to always play characters that I don't really get on with. With the rich businessman he plays here it is business as usual but he does the role well at least, it fits his style.

My problem came with the simple fact that none of the stories in Ghost Stories end in a good way. The thread connecting these is Goodman travelling around to interview the three people and all their segments have the annoying habit of ending mid horror. It cuts away from the finale of their parts to go back to the Professor's investigations with no explanation of how the relevant character was able to survive, or what they did afterwards. It felt each time that it ended just as it was getting good, and felt a little bit frustrating to not get a decent aftermath. With the night watchman we get an epilogue of sorts from a priest that is interviewed, while Mark gives his own epilogue to what happened with him. As for the main plot line it went to some really strange places that I reckon no one would have guessed (at least for where the film goes, the big twist isn't the most original, but the path it takes to get there certainly is). I did love how clues are peppered throughout this, a second watch would unearth a treasure trove of these as every random thing that is seen or heard throughout the movie comes full circle for the bizarre finale. 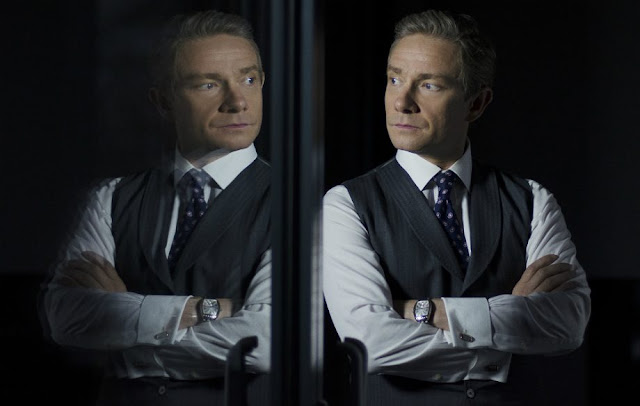 I found this movie to be genuinely unsettling with some stand out freaky moments, such as a locked basement room full of mannequins, a bright white passageway with a mutant laughing zombie like creature, there are plenty of freaky moments. The marketing for this film was that 'the brain sees what it wants to see', and with Goodman being all about debunking paranormal events I had really hoped for some grand reveal, that what I had been seeing was very different to the reality. While this was true it wasn't in the Derren Brown way I had anticipated and so I left feeling faintly bemused, and a tad disappointed. Still this is well made stuff and if you like your horror a little bit off kilter this is worth a watch.