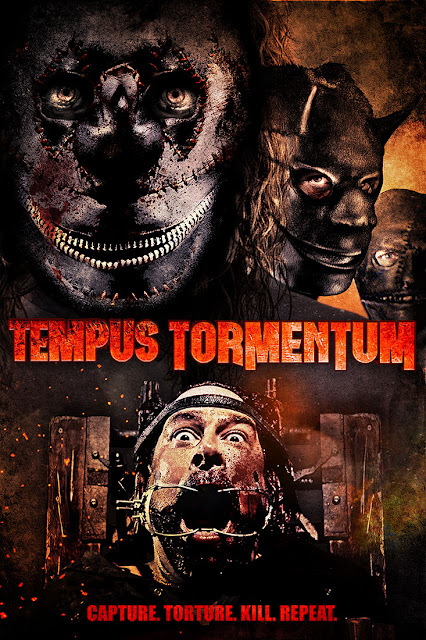 James Rewucki's Tempus Tormentum is a film that puts a lot of stock on its visuals and sound, but not so much on its story. It prefers to stick to a very abstract concept rather than tell a cohesive plot, because of this it feels very art house in style and that both works towards it at times, but at others works against it.

A drifter (Tyhr Trubiak - Curse of Chucky) arrives in a small American town and rents a motel room. That night three mask wearing psychopaths break into his room and inject him with an unknown drug before giving chase. Wherever the drifter runs to he comes across strange acting townsfolk who are either unwilling to help, or are in on the bizarre event. The three crazies seem reluctant to kill their victim and instead seem to have other plans for his eventual fate... 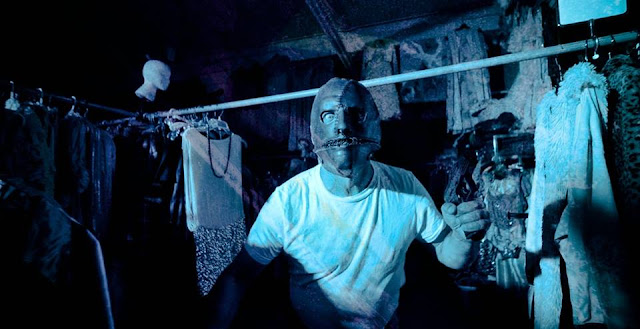 More than anything this reminded me of the 2006 horror After..., while that is set in Moscow's subway system and this is set in a small town that is where the differences mainly lie. Both these films look and feel like a combination of a music video and a bad acid trip mixed together and spread over a feature length movie. Aside from the plot of a stranger being hounded my maniacs there isn't really any more meat on the bones, we never get to know what sort of person the drifter is, aside from it seems he has a girlfriend somewhere. Because of this it was very hard to care about his plight at all, there was nothing to him and so no reason at all to root for him as the protagonist. Dialogue is minimal here, there isn't really a conversation at all here. In fact I reckon the antagonists get more lines than the hero character, these three characters are Devil (Darren Johnston), Slashmouth (Paul McWhinney), and Clown (Dr. Rage) and while they don't have much to them they are entertaining in a way. I like the off kilter things they do while chasing their victim, such as Clown who gets in a conversation with a mannequin in a warehouse, then later on in a church starts playing the organ dementedly.

With the neat cinematography we get plenty of off kilter shots with heavy use of light and shadow to create an ever present dream like state. That is what initially confused me a bit, the horror of this starts with a typewriter typing on its own something like 'the dream begins' before the three bad guys burst in the motel room. As such I couldn't really get invested as it all seemed nothing more than a terrible nightmare. The lighting and really strange inhabitants of the town did nothing to change that for me, it all seemed as I said before like a bad acid trip the drifter was having. This arthouse style of editing and directing comes to a head in the finale which felt like a horror version of the famous planet entry scene from 2001 A Space Odyssey with a unique looking torture scene. 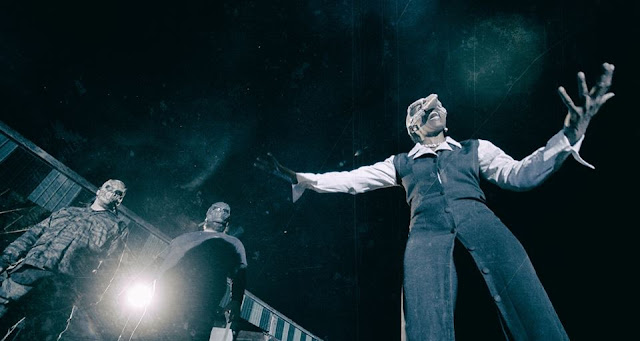 The sound design was fitting for Tempus Tormentum and while there wasn't a huge reliance on music when it did feature it complimented the visuals very well, and felt like a key component of the weirdness that was this movie. I had a feeling the plot wouldn't get resolved very well if at all and it really doesn't do much to pander to the audience, I was left with my own ideas of what had been going on, my thoughts placed this in a similar format to David Lynch's The Lost Highway. While this is pretty much an eighty minute chase there are moments of downtime injected to give a breather from the relentless running and hiding. Even more arthouse style dream sequences pop up now and again, the most peaceful being black and white segments that have the drifter in more civilised situations, though no more messed up. The variation in locations was constant, yet they all seemed to feel the same, mainly dilapidated warehouses, and abandoned houses. For a chase film there was never a feeling of tenseness, as said I didn't really care what happened to the guy, especially as the many times he gets captured nothing really bad every happens to him. Sure incidents occur (such as a demonic type creature attacking him), but he is always released to be chased again. This did have some highs, a part where he is in a cage being dragged behind a speeding car was particularly attractive to watch.

For those wanting a simple three act structure movie you may be disappointed with this. In the right circumstances I could see this as being pretty rad as it had an attractive look thanks to the effective lighting, while the cinematography bordered on stunning at times, but the lack of cohesion did ultimately become the main complaint I had with this. Tempus Tormentum came out on digital platforms on April 17th thanks to Terror Films.