The Rotting Zombie's Round-up of Horror News for April 2018 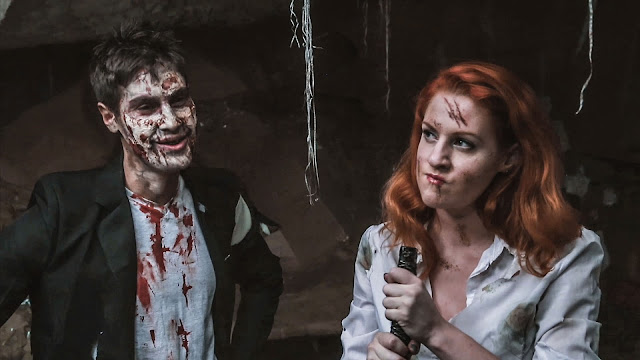 Another month and another post to cover all the horror news I have been made aware of this past month. Starting off with some pretty cool news Hex Studios (the people behind the excellent Lord of Tears, The Unkindness of Ravens and The Black Gloves) have created a new YouTube show designed to showcase up and coming genre talents. This show is called Hex Presents and the first episode is Kate Shenton's horror comedy Egomaniac which is described as 'a harrowing and hilarious tale of a woman trying to get her first movie made'. This is a great idea, I shall be keeping an eye on Hex Presents to see what else they promote in the future. In further Hex Studio news they have put out the first trailer for their new Gothic thriller Automata. This fifth feature tells the story of an antiques expert who is sent to authenticate a 300 year old clockwork doll with a notorious history, it certainly looks like it is going to be another great movie judging from the trailer. A Kickstarter campaign has launched to fund post-production of the film, that can be found here.

A few months back I mentioned Haunted Tours which is a paranormal investigation show that aims to go more extreme than others before them. Well it is back for a second season and it seems that they really are sticking to their guns in trying to do things no one has done before. Season 2 sees the crew heading to Jerusalem where head investigator Stephen Erkintalo is going to attempt to contact Jesus Christ! Filming on this season starts later this year, in the meantime season 1 can be watched on Amazon Prime.

German Angst is getting a Blu-ray release courtesy of Artsploitation Films, this is made up of three different German short movies. Final Girl is by Jorg Buttgereit and tells the story of a young girl, her guinea pig, and a bound and gagged man in a dirty apartment in Berlin. Make a Wish is by Michal Kosakowski and concerns a young deaf-mute couple who get attacked by a group of skinheads, but may have help in the form of a mysterious talisman they own. Finally is Andreas Marschall's Alraune and is about a man who discovers a secret sex club that promises the ultimate sexual experience, but with horrific consequences. This is due to release on June 19th and will include a whole host of extra content on the Blu-ray.


The Slash Gang have released the first teaser trailer for their upcoming no budget feature film Grimmwood. This Halloween based horror is inspired by Are You Afraid of the Dark? and the works of R.L Stine. The story for this has people mysteriously dying on the anniversary of an accused witch's execution, a journalist and his teenage sister set out to uncover the truth behind the local legend of the witch.

The 80's Italian cult classic Ghosthouse is getting a remake from filmmaker Dustin Ferguson (Nemesis 5). An Indiegogo campaign has recently been launched to raise initial funds for production. It is about a group of college kids who follow a strange broadcast on an old TV set that leads them to an abandoned house deep in the woods. They find horror inside including ectoplasm pits, flying objects, ghostly apparitions and even the Grim Reaper itself. If you want to check out the campaign page then head here.

The Guerilla Movie-making Awards have returned for their second year. The awards are to celebrate the best in guerilla filmmaking for films that have budgets between $0-$500k and there are over 20 different categories. Last years big winners went to drama and horror included Heidi Moore's Dolly Deadly, Shane Ryan's My Name is A by Anonymous and The Girl Who Wasn't Missing, Robin Bain's Nowhereland, and Gabriel Fowler's The Sniper. Entry fees are as low as $8 with the early deadline being June 1st, and the final deadline December 25th, each submission is an official selection into the awards. If you want to submit your film then head to FilmFreeway or the Guerilla Movie-making Awards site (that has a $2 discount).
In final films news the excellent Romanian found footage horror Be My Cat: A Film for Anne was re-released on April 27th via Terror Films and is going to come to a variety of digital platforms. The stunning Polish Demon is coming out on 28th May from Sharp Teeth Films. This is based on the Jewish folk myth of the Dybbuk and is full of horror and dark humour, was a memorable film.

April 9th saw the digital release of Acid Washed's remix of horror synth composer Videogram's Voorhees Stomp. This remix received a wider release on streaming/download services this past Friday 13th and features Jason X themed artwork by Jesse Philips.
Heavy rock trio Red Devil Vortex have released a music video for the lead single off of their Something Has to Die EP, this EP is due for worldwide release May 4th and is to feature five original songs that will bring 'a great listening experience with high energy guitar riffs, chaotic melodies, and a strong message about strife and survival while facing your demons.

I shall end with some zombie news, if you head over to Mightygoods there's an article with tips on surviving a zombie apocalypse, it is set up as an interview with 5 different 'experts' on how best to survive. While I skim read the thing it at least had some nice photos of a couple fighting zombies.
Posted by Daniel Simmonds at 12:00