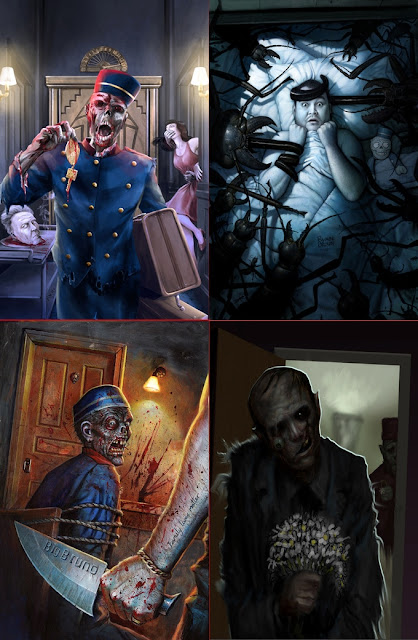 Twilight Hotel is a new comic book series from writer and creator Ra X that is going to consist of 4 issues. Issue 1 had a successful Kickstarter campaign last year, and on Friday 13th April a week or so back a new campaign was launched in support of the series.

Twilight Hotel takes place in the titular hotel which has a very shady past. Tortured souls are drawn to the notorious hotel where they are visited by their own personal demons, much like what Silent Hill in the survival horror videogame series does. An ancient evil known only as SHE resides there, and the building was purposely built as a vessel for SHE to reside in. In issue 1 we meet the narrator Virgil Lee Petty who is the long term maintenance supervisor and who had been due to retire. Things don't go exactly according to plan and instead he decides to relate to the reader just what sort of place the Twilight Hotel really is. Each issue takes place in a different time period with the first issue being mostly about the original owner of the hotel; Calvin Pennyworth III and the reasons for his actions.

I often say I love anthologies and so I was immediately taken with the premise behind this series. The hotel has a kind of The Shining feel about it due to all the death and madness that has taken place there over the years. This is all brought to life by fantastic art work by Michael Aryn, his art is consistently great with art really being the right word for his drawings. There is plenty of vivid blood here that is striking against the backdrops, while characters look realistic rather than overly cartoon like.

Issue 1 is more a set-up for the series rather than a traditional story, the parts concerning the narrator were the most interesting, while the flashback to past events were all done in black and white, but with the lovely blood effects still crimson and so stick out very well. Occasionally you get a full page spread, narration boxes paced about so as you scroll down more and more of the overall picture is revealed. I figure that the following three issues will tell stories in a more traditional structure.

As I mentioned there is currently a Kickstarter going to raise funds for the production of Volume 1 that will be made up of Head of the Tale, Bed Bugs, Truth or Consequences and Pushing Up Daisies. Since the first issue came out last year more artists have been hired to work on the series, this includes Chet Zar who in addition to having a large fan base (100,000 followers on Instagram) previously was an effects makeup artist on such films as The Ring, Planet of the Apes and Hell Boy II. If you want to contribute to the Kickstarter then head here where there are the usual tiers of rewards depending on how much you pledge. Going by issue 1 this is going to be a good series for fans of anthology horror such as The Twilight Zone and Creepshow.
Posted by Daniel Simmonds at 15:12