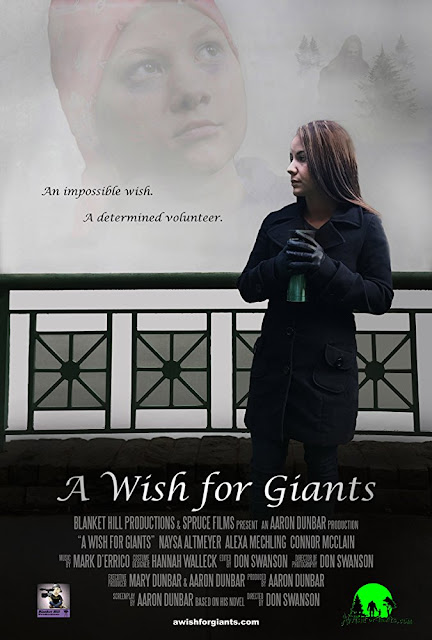 The award winning A Wish for Giants is something a little different to what I usually review here, mainly that it is a family friendly drama that only really shares one element with the horror genre. This is a heartfelt indie piece that achieves what it set out to do despite a low budget.

Young Roxie (Alexa Mechling) has a brain tumour and while getting treatment is asked what wish she would like to have granted (by a Make-A-Wish style foundation). Being obsessed with Bigfoot her answer seems simple, she wishes to actually meet one. College student Sophie (Naysa Altmeyer) is a volunteer at the foundation and is given this task, however her search leads to nowhere and she is reluctantly forced to team up with Derrick (Connor McClain) - the spoiled son of a rich politician. While Sophie feels a connection with Roxie and wants to make her dream come true Derrick just wants the publicity that would come with finding a real life Bigfoot, or at least tricking people into making them think he had found one. 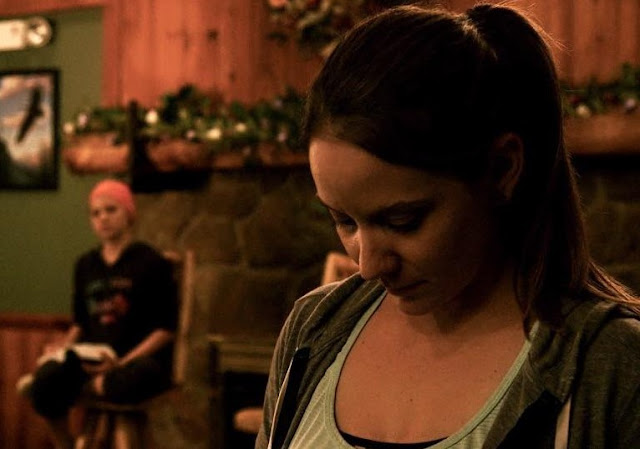 This is all predictable enough stuff yet there is a lot of emotion behind the goings on here that comes through the sometimes patchy acting from the cast and the sometimes one dimensional characters. I found it too hard to dislike this as it does everything in a nice way. There is no real conflict here, or at least none that devolves into any sort of violence or bad language which made a change for me. Sophie is the main lead and is good in her role, she comes across as believable in wanting to do the best for Roxie. She is the good character of the piece and so many of her scenes feature her in light surroundings. Derrick on the other hand is set up as the antagonist, even if he didn't speak this is reflected in the dark locations he resides in, such as a dingy bar. There was effort to give him more depth than a cookie cutter villain, mainly in the few scenes involving his father that show how unloved he is. On the surface he doesn't do too much that is inherently evil, the biggest obvious 'crime' he is planning is to use an actor dressed up as a Bigfoot, in real life this is probably what would have happened. There are some behind the scenes stuff that never really get addressed and make him more nefarious, the biggest unresolved plot point being it implied that he got an innocent old lady committed to a mental asylum as he feared she would be able to help Sophie before he would be able to.

Some of the subplots not getting resolved was a bit of an issue for me, aside from Derrick there was also a lot of signs pointing to the fact that Sophie and her boyfriends relationship was nearly at an end. She never finds out just how awful a person Derrick actually is, and indeed actually seems to be thinking more highly of him by the end of the movie when he had been secretly hacking her phone and computer. There also wasn't a resolution for the character of Roxie, it was never clear what eventually happened to her, that never really seemed to be the focus of the picture. 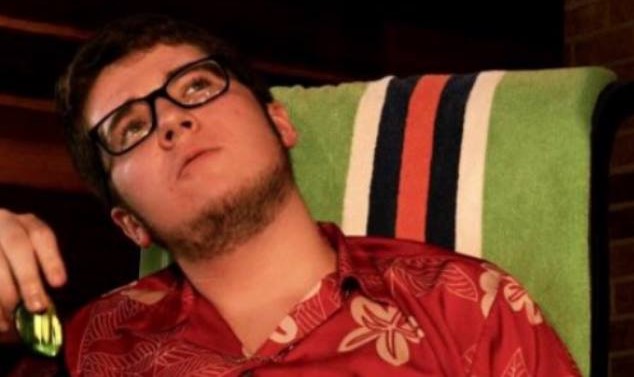 Holding this all together is a soundtrack that plays to the innocence of the main task at hand, it is appropriate to what is happening and helped bring out the emotion in scenes where the actors wouldn't have been able to do so on their own. As for the horror itself there is a few scenes, well one in particular that had a nicely directed scene of a car getting smashed. The alleged Bigfoot works mainly due to the scene taking place at night so it is hard to make much out. On the subject of night though this does that thing of having a day scene transition into night with a character in both times acting the same, it seemed a bit unrealistic the character would have been saying the same lines over and over again for hours while also seeming more irritated than worried about what was going on.

A Wish for Giants is something that is different, it is a feel good film that displays the innocence of youth and how strong hope is. I liked the low key feeling to the story, how it was a personal quest to help out a dying girl rather than a world changing event. At times I did wish some of the side elements had been explained rather than left aside to die off, overall though this was a pretty sweet indie film with a decent finale that was worth the wait.