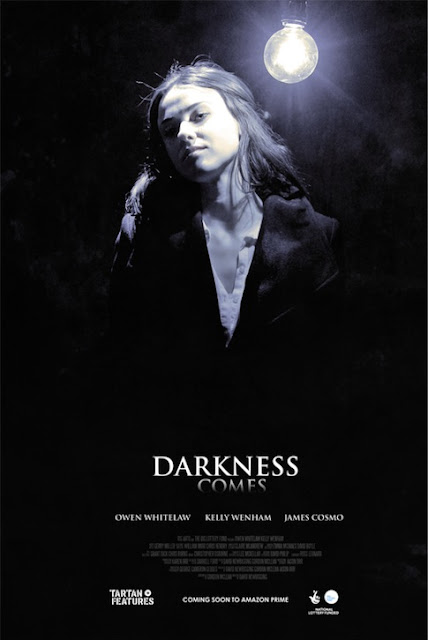 Darkness Comes (also known as Dying Light) is an indie Scottish horror that was directed by David Newbigging with a story by Gordon Mclean. This manages to do a heck of a lot with very little and works wonders as a horror due to the great cinematography and use of light and shadow.

Eddie (Owen Whitelaw) thinks it is his lucky day when he hooks up with beautiful stranger Suze (Kelly Wenham - Dead Set). She takes him to a dilapidated room in an abandoned building but rather than have sex she instead injects him with a syringe full of a mysterious drug. Tying him to a bed frame Suze then proceeds to carve runic symbols into his chest, it seems he is the key ingredient in some sort of Satanic ritual. Locked in a dark room with a psycho Eddie must try and find a way to escape, before the darkness comes... 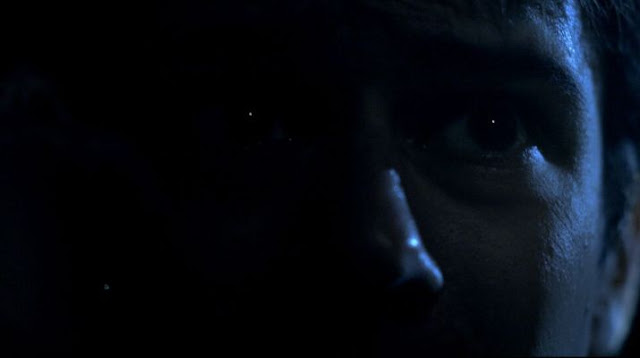 I initially thought this would fall into the torture porn genre, it all feels very Saw/Hostel like to begin with. The entire film takes place in the one sparse room, the only furniture being a bed frame, the only illumination coming from one dim light bulb. At just over an hour long this is shorter than most feature films, even so I wondered if this could remain involving for the whole duration. Thankfully it does, this is down to the unrelenting horror that starts a few minutes in and never lets up. The strongest element here is the oppressive unrelenting score that grinds its way into your mind, it perfectly compliments the grubby otherworldly seeming room.

There is a subtle shift from torture porn to something of a more demonic nature, yet nothing is ever explained, there is only suggestions of something unnatural occurring. Darkness Comes is an apt title (as is Dying Light) as the movie gets progressively darker as time goes on. I felt at times it was a little bit too dark to tell what is going on at times, yet perversely towards the end when the light really has nearly faded the darkness comes into its own and adds onto the horror. Being trapped in a room with a psycho is bad enough, but when she is able to be sucked into the blackness and vanish the tension ramps up dramatically.

The small cast are well chosen, Eddie has a believable naive quality to him that Whitelaw is able to slowly morph into someone more determined as the time goes on. Wenham has less of a character development to her but exudes a confidence in what she is doing, while providing cryptic clues as to what is occurring. The stand out character for me though was a Policeman (James Cosmo - Game of Thrones) who is only heard on a phone. There was an insidious nature to his voice and was quite fun how it slowly becomes apparent from the strange way he is talking that he may not be who he appears to be. There isn't much dialogue at all for the majority of the film which adds to the bleak atmosphere.

Darkness Comes is a decent claustrophobic horror that utilises the limitations of the small location to craft a captivating and mysterious film. Sometimes less is more and this is a shining example of that. I was hooked from the very beginning to see how this would turn out, despite a somewhat ambiguous ending I wasn't disappointed. Darkness Comes has come to Amazon Prime thanks to Tartan Features.

Posted by Daniel Simmonds at 07:21