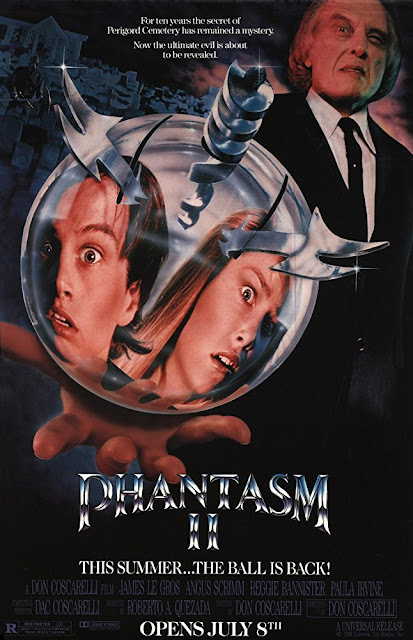 I had just finished watching Phantasm for the first time in over a decade when I decided I may as well hop straight into Phantasm II. While this was the most expensive film made in the five strong franchise it found itself with some studio interference. The three biggest changes director and writer Don Coscarelli was forced to make was 1. He was only allowed to use one of the original actors for the roles of Mike and Reggie, so Reggie Bannister reprised his role, but A. Michael Baldwin who played Mike couldn't return. 2. The character of Mike had to have a love interest this time around. 3. The dreamlike quality that made the first film seem so special was removed in place of a more traditional process, this meant no dream sequences were allowed.

It has been seven years since the events of the first movie and during that time Mike (James Le Gros) has been kept in a mental asylum due to his wild stories of The Tall Man (Angus Scrimm). He is picked up by friend Reggie upon release but they return to Reggie's family home to find it destroyed and his family dead. With nothing left to live for he teams up with Mike to find and kill The Tall Man. Meanwhile this fearsome being has been going from small town to small town murdering the inhabitants and growing his zombie dwarf army, picking up his trail the two friends mean to end him once and for all. 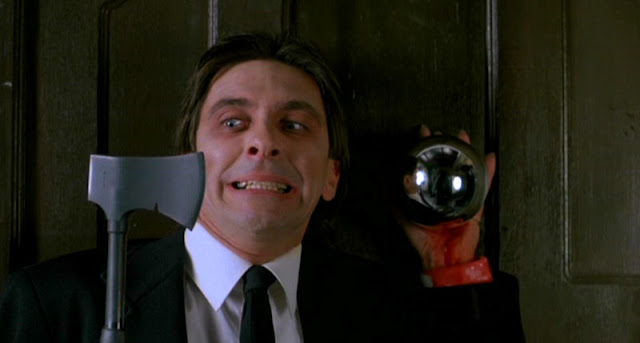 This isn't as good a film at all as the first in the series, however it is still a decent enough sequel even if it does revisit a lot of the same ideas as before. Sometimes this lack of new ideas works, such as expanded scenes involving the murderous spheres, sometimes they don't, as can be best seen with the final scene which is nearly identical to how the first movie finished. Scrimm has a lot less screen time this time around, and with the reduction in the dreamlike elements he doesn't have as memorable a presence here. He doesn't really do much as a character, though has a nice demonic themed part where he hangs a priest by his own crucifix necklace, and there is a great looking sequence involving hydrochloric acid.

Phantasm II has more the feeling of a road trip film in that the two friends are going from ruined town to ruined town searching for their adversary. Along the way they team up with love interests, Mike meets telepathic Liz (Paula Irvine), while Reggie meets wild hitchhiker Alchemy (Samantha Phillips). Neither of these characters really add much to the series, Liz in particular is weird with her telepathic connection to Mike and The Tall Man, while Alchemy is a decent enough character but takes part in the film's only sex scene that was very odd to watch, With Scrimm in a reduced role it is down to his henchmen to fill up the bad guy roster. It turns out these characters add a lot of fun action, there is a great chainsaw vs chainsaw fight for Reggie, and an exciting chase through a funeral home by a thin mortician and several spheres that are not too picky about who their targets are. This also introduces one of the more cooler weapons in horror film history; the quadruple barrelled shotgun! 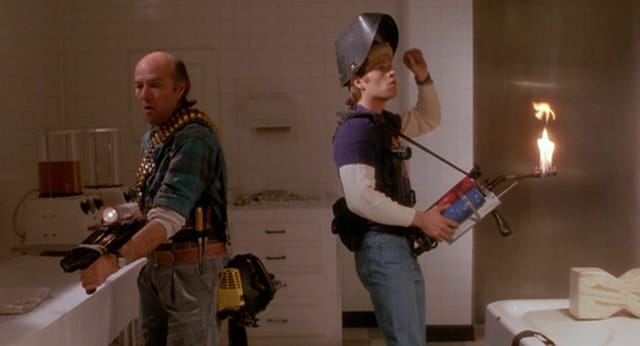 The special effects here are really fun, there is more body destruction than before, the most coolest looking being a sphere that buries itself into a victim and then burrows itself all the way up into the face. There is also a subtle scene of a character getting burned alive, a few different explosions, and a creature effect that looked straight out of A Nightmare on Elm Street. The directing is good again, I especially liked the scenes that appeared to pay homage to Sam Raimi's style of film making, certainly with one scene where a sphere is shown in near first person as it smashes through door after door. With Mike now 18 the charm of having a young actor was lost as while Le Gros is fine in the role he doesn't have much of a personality. In terms of plot the explanation that Mike had been locked away for seven years felt a bit unbelievable due to how normal he is in the outside world. Elsewhere Reggie is a great character but his motivations never feel authentic, he lost his family, but as a viewer we were never even shown these people, and he certainly doesn't seem that upset, being as he is the more light hearted of the two.

I did enjoy Phantasm II, more than I thought I may, but when you strip it down and take away the road trip aspect this is near enough a similar retelling to Phantasm but with more action and spectacle. Everything is back, with more budget, so you get more zombie dwarfs, more spheres (with increased powers such as buzz saws and lasers), this is all good. However with the dreamlike atmosphere reduced The Tall Man and his world don't feel as enigmatic, the atmosphere is there, along with the great soundtrack but as a whole this feels a little diluted, and is just more of the same.