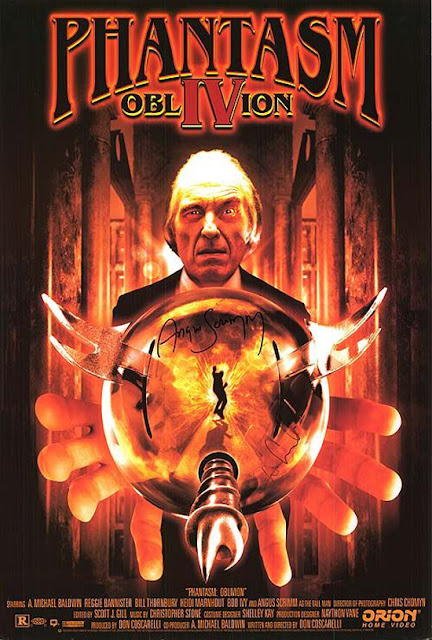 It is day two of my binge watch of the entire Phantasm series and it was time for the film that had left such a sour taste in my mouth for so long. When I first watched Phantasm IV: Oblivion it was as far as anyone was concerned the very last film in the series. This wouldn't have been so bad if it had not finished on such a huge frustrating cliffhanger, thankfully there was a fifth film released in 2016 which I have not seen yet, but hope it resolves the series this time around. Apparently a very ambitious fifth film had been intended to be made soon after Oblivion, and that this was created as a precursor to that.

As always this picks up exactly where the previous film had ended (Phantasm III: Lord of the Dead). Mike (A. Michael Baldwin) has headed off on his own after discovering he may not be human, his brother Jody (Bill Thornbury) follows after him (the brother now being a floating sphere...it's a long story). Concerned for Mike his best friend Reggie (Reggie Bannister) gives chase. Events lead Mike, Jody, and Reggie, as well as the ominous Tall Man (Angus Scrimm) to Death Valley where the Tall Man's origin is discovered, and a final confrontation is attempted. 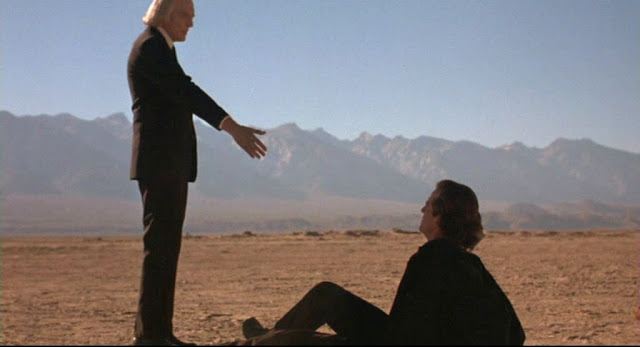 This follows the pattern of each sequel not quite being as good as the last, Oblivion is really one for the fans as it assumes a lot of knowledge and gets deep into the lore of the series. When Phantasm was first made there was a load of footage that just never got used, one thing that Oblivion excels at is using this footage as flashback and dream sequences in a way that feels natural. Having the exact same actors in both the 70's scenes and the 90's just feels special. Director and writer Don Coscarelli even feels confident enough to finish this movie with an unused scene from Phantasm. With this movie more than any other exploring time travel it is fitting.

There always comes a point in a horror series where the origins of the main antagonist are explored, Halloween, Friday 13th, Hellraiser, Evil Dead and many more have done this and it is with the fourth film here that The Tall Man's origins are revealed. Scrimm is on top form here as this creepy being, while as always he doesn't do too much his imposing walk is pretty iconic by this point, there is even a call back to methods used in the first film with his footsteps unnaturally amplified at points. There are of course a few scenes involving the spheres but they are not as big a focus this time around, they get their time to shine when Reggie discovers a woman with spheres for breasts which then burst out to attack! The zombie dwarfs get a couple of scenes also, as do the more normal sized undead (a memorable part featuring a zombified cop). 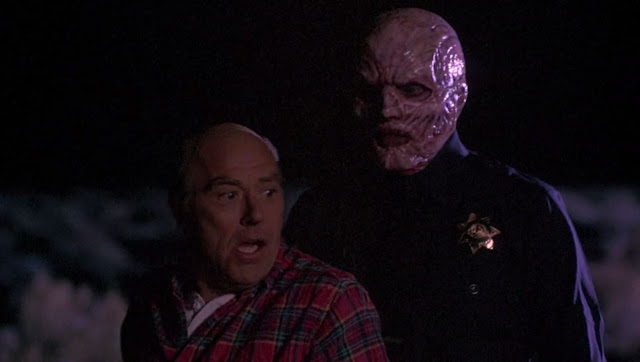 A lot of Oblivion is filmed out in the desert with the notion of time travel used to leap the characters around to relevant sets. This was due to budget constraints and it works in a way, aside from it is never really explained why the desert is where the characters had to go. Reggie is as lovable as always, carrying on his comedic thread of disappointing encounters with beautiful women. Mike is as weird as he has always been in the later films, the plot of him gaining the same powers as the Tall Man is the focal point for his arc but he just seems to lose more and more humanity making him a hard person to root for. There were some odd decisions made for other characters such as a heel turn which baffled me, seemingly retconning what people have said in previous instalments. Then there is the frustrating ending, it is less so now there has been a further film made but it still brought back the original emotions I had when I first saw the movie all those years ago.

Oblivion is an interesting entry that seemed made for the fans, though Coscarelli did say at the time he made it just to make some money. It is comparatively low on action and more on dialogue, but sticking with the style of films there are huge car explosions at three different points (with a fourth wall breaking comment by Reggie during one of these), and so is not entirely without thrills. This is a strange beast in that whether it works or not really depends on the direction the fifth film takes. This has a lot of dream sequences, and a lot of mystery but again even with the clever use of old unused footage it never reaches the heights of those that came previously.

Posted by Daniel Simmonds at 02:15