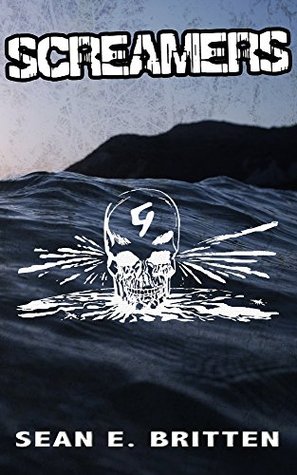 The big shame of my blog is the amount of eBooks I have waiting to be read, some dating back as far as 2012. I accept full responsibility for this terrible backlog due to a combination of bad luck with eBook readers, and far too many other distractions. Sean E. Bitten's Screamers is a zombie novel that takes place in Australia, the first undead novel I have ever read that takes place exclusively on that continent. It is actually his second zombie novel, the first being 2015's Wave of Mutilation. To make this late review even more confusing I actually have a copy of his first novel as well for review, don't ask why I ended up reading the newer one first (they are unrelated at least).

Screamers starts about half a week after undead apocalypse swept the globe and centres on a young couple; David and Michelle who had been attempting to flee Sydney by car. Trapped in a traffic jam that is rapidly turning into a bloodbath they abandon their car and head off into the countryside, eventually arriving at a remote collection of houses alongside the Hawkesbury river. One of the homeowners; a semi famous author named Baron befriends the duo and soon they have settled in. On scouting runs for supplies the group come to realise that the 'screamers' as they have been coined are far more dangerous than even they suspected, and seem to be getting more intelligent as the days go on...

I love zombie stories in general and this one doesn't disappoint. I really liked the fact that the book picks up mid apocalypse, there is no generic initial outbreak with people not knowing what is going on, instead the characters are clued in from the start that saves on a lot of time. I also really liked the setting, so many books take place in populated areas, at least for some of the time, so having the entire plot take place out in the relative middle of nowhere just felt fresh. This cuts down on the amount of zombies (I'll call them screamers from here on out) but with how these ones act in comparison to other examples that is probably a good thing.

The screamers differentiate from other undead in that there is a H.P Lovecraft style suggested twist of how they came to be, and also how they physically change over time. There is never a concrete reason for how the outbreak started, but there are theories that it was to do with a gigantic island that mysteriously appeared out in the Pacific ocean, one that David frequently has nightmares about. The screamers mutilate their faces as the initial stage of their transformation, and even go so far as to make their bodies into weapons, such as the flesh being cut off their fingers to make bony spikes. There are 'super' versions of the screamers that seem to exhibit more intelligence and can lead the others, such as one that has peeled all the flesh off it's face, one that has mutated to resemble a gorilla, another that has become freakishly tall. They are all dubbed screamers due to the ear piercing screams they let out upon seeing prey. These screamers set traps, crucify people, and even take victims hostage for reasons initially unknown.

For much of Screamers there is no grand plot going on, it is instead a story about survival with the boat trips by Baron and David taking up the majority of the book. Their little outings feel like mini adventures and shed light on the surrounding areas as they find pockets of other survivors both friendly and hostile. These stories never really get resolved, yet this works as it adds mystery to the world. Usually coming across a band of bad survivors would become a focal point, here instead these groups are encountered every now and again, yet aside from a surreal segment on a perpetually partying group on a huge boat nothing major really happens with these encounters. It leads up to a final third that is action packed all the way, yet it is not the one situation going on, rather there are three different major events that happen nearly back to back for the poor survivors. Each time one is over an even worse event happens. Each event was vastly different and so it was pretty exciting to have them bleed into each other despite being unrelated on the surface.

There is lots and lots of violence in Screamers with many descriptions of the brutality both humans and screamers alike inflict on each other and on themselves. David's main weapon of choice is an axe, I lost count of the times it got embedded in screamers, or hacked off fingers, hands and heads. All told with brutal detail, lovely stuff. Baron's main weapon was a shotgun, again the book described in intense detail the damage this weapon did. The shotgun did feel like a 'get out' clause at times, despite saying there wasn't much ammo for it the gun saves the day throughout the whole book. The sheer violence of the screamers made them pretty freaky enemies to imagine, leading to some pretty crazy moments. Favourite for me would be the part involving the tall screamer at the house (won't say any more for fears of spoilers). Britten also makes an attempt to show the effects of all this horror on the characters. David in particular is really shown to suffer, his first encounter with the tall screamer literally makes him temporarily lose his sanity, again this brought to mind the works of H.P Lovecraft with the idea that these beings cause mental damage along with physical.

I had no complaints with the writing at all here, the setting was fresh feeling and the screamers were unique in how they operated. I felt the finale became a little bit cliche and convenient with the arrival of a traditional element in a zombie novel, but it was still written well and still exciting to read. The cast of characters were fine, no-one came out of this as real heroes with everyone exhibiting at least some flawed characteristics (such as Baron's insatiable curiosity), there was also a very high body count with some really gruesome death scenes, one character for instance has their heart ripped straight out of their chest!

I love zombie novels in general, it is a hard topic for me not to enjoy, thankfully Screamers was a great novel, I really enjoyed my time with it, helped by the setting, and the changes to the normal formula. Now I have read this I shall have to make Britten's other zombie novel Wave of Mutilation my next read as I like the way he writes.