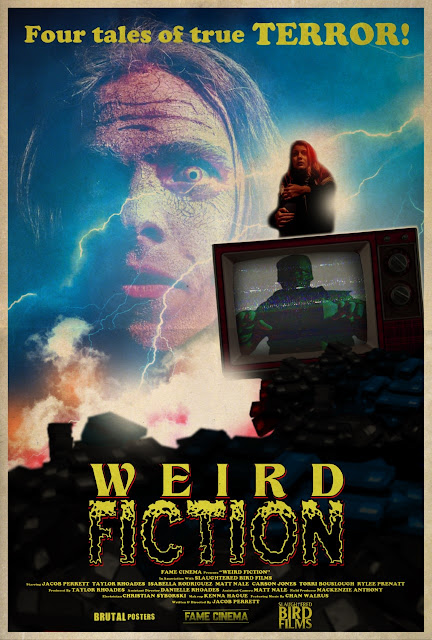 In January earlier this year I had an interview with young Jacob Perrett in which he said he was working on an anthology feature length film made up of four separate stories. I have previously seen some of his work and thought it was good if a little rough around the edges. The great news is that Weird Fiction blows everything he has done before out of the water, this is another level of professionalism that just continually impressed. I believe some of these shorts have been released previously, but repackaged into this anthology, no bad thing as I would put the anthology style of film as one of my favourite types, there is always at least one that is worth seeing.

With Tales From the Crypt seeming to an influence this anthology is very eighties themed with all the stories take place in that decade, with an appropriate soundtrack, and grainy footage to give the impression of an old VHS cassette tape. The wraparound segment features director and writer Jacob Perrett as 'the Collector' who is a creepy figure who introduces each tale (that are roughly 20 minutes long each) with glee in his voice. I thought that Perrett's character was the best in the whole film, he was entertaining, looked great, and his script was well written. I liked how he adds his own little comments in after each of the shorts has ended. The first short is titled Goodnight, Daddy and fits neatly into the slasher genre. There has been a number of missing females in the area and it is thought a serial killer is on the loose. Two teenage boys decide they are going to see if they can find the bodies of the missing women, and by a stroke of luck (or should that be misfortune?) they succeed in their plan. This was one of my favourites, the eighties vibe delighted and I knew there and then that whatever the quality of the rest of the films I would come away having enjoyed Weird Fiction. Taylor Rhoades plays the role of the killer and he would be a recurring lead actor throughout all the shorts. He plays a character that is meant to be a lot older than he is but thanks to face paint his youth is hid very well, I really liked the killer character. This felt like Halloween but with an interesting twist, while the teenage boys helped give this the feel of an eighties horror such as Fright Night and The Lost Boys. Some of the night scenes felt a little too dark at times, and the editing made things a bit confusing also on occasion. There is one scene for example where a character gets stabbed in the face, I still have no idea who stabbed the character, or how, but at least it was lit, and shot in such a cool way.

The second story is Night of the Sitter that I know from my interview with Perrett has previously been released. In this one Rhoades plays a high school jock who has agreed to babysit his love interests younger brother in hopes of impressing the girl. The brother seems weirdly scared that there might be a monster in his closet, or under his bed, and it turns out he might have a reason to be afraid. This was the most light hearted film here with plenty of comedy moments. There is a red herring in the form of a ventriloquist's doll, but when the real evil appears it does seem just like someone wearing a black bodysuit. Still this had some funny moments and my favourite ending of the four. I like with these how things that would be costly to film are insinuated by what characters say, this one perhaps achieves this the best. 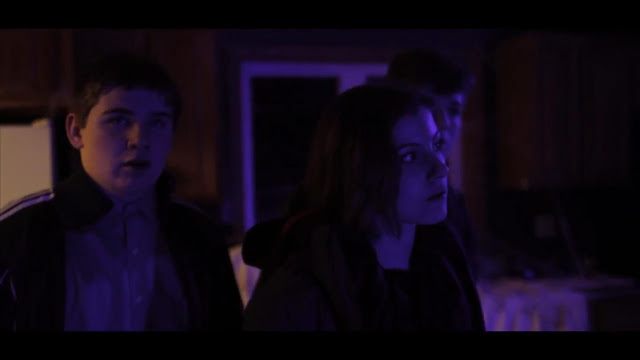 Third film is The Incubus which again I think has came out previously. This takes place as a vampire film with actor Dan (again Rhoades) waking up one morning with two bite marks on his neck. He soon decides he has become a blood sucker, but has he really? While I did like this it was probably the weakest part of Weird Fiction, I felt that Dan had huge leaps in logic, and the silly way he starts acting once he thinks he has changed was odd. The most off putting thing was the long nails he gets, these did not look realistic at all unfortunately. The character of Missy (Torri Bouslough) was entertaining though, I liked how it was edited to make her appear to have sinister motivations with it not made clear if this was all in Dan's head or not.

This leads us to the final short which is Cosmic Terror which as can be guessed is based on sci-fi B-movies. Two sisters discover a Martian alien (Rhoades) in their house, one of the sisters decides she is going to look after him, but his ultimate motivations for visiting Earth is unclear. This had the vibe of a The Twilight Zone episode and I can picture (at least the Martian parts) working well as part of that series. There was also a nice bit with zombies that helped add weight to the script. I felt the initial introduction of the creature suffered slightly due to nothing being shown but in general this was another good one. 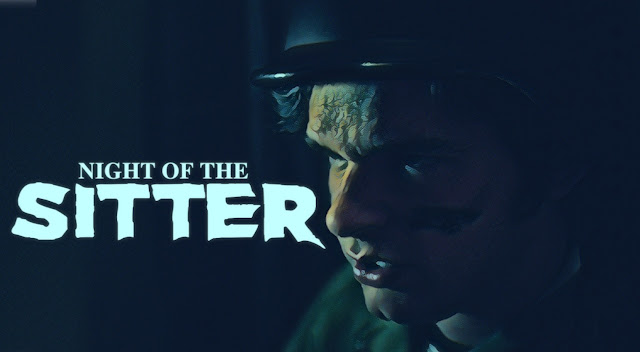 The quality of both the wraparound and the shorts themselves impressed me, I was surprised how much I really did like this. It helps I love anthologies anyway but this (that purports to have zero budget) was a solid film with acting that wasn't terrible, a fantastic soundtrack, and a great look to it. Budget constraints might show on occasion, and the plot occasionally assumes the viewer is up to speed on what is going on, but overall this was a damn fine film that shows Perrett must have a bright future ahead of him as a writer and director.