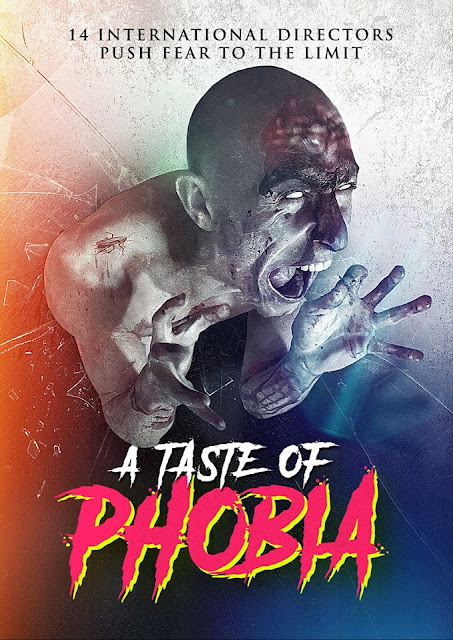 First mentioned by me back in March (here) A Taste of Phobia is a horror anthology that is made up of 14 different short films created by different directors. As the title may suggest the theme of this anthology is phobias, yet rather than go for the obvious route such as clowns, heights, enclosed spaces etc more niche phobias are explored. I have said it countless times before but I love anthologies, the short length means even if you don't get on with one of the shorts another one is sure to delight. With A Taste of Phobia more often than not the films were not the strongest, a lot of this is down to how the films were tackled with the phobia itself coming centre stage a lot of the time meaning there wasn't really a plot to speak of. The films that used the phobia within the context of a story were the ones that really stood out for me. A lot of these films focus on a single character on their own, rather than much interaction with other people, because of this some of them felt quite samey.

This 90 minute anthology starts off promising with Chaetophobia - Fear of Hair (directed by Lorenzo Zanoni and Alessandro Sisti) in which a hairless serial killer hunts a victim. The actor playing the killer had some great facial expressions while the special effects were stomach churning. This was a recurring theme with many of the short films being quite disgusting and bloody, a lot of self mutilation throughout. As for this first film it was enjoyable and had a darkly comedic finish. 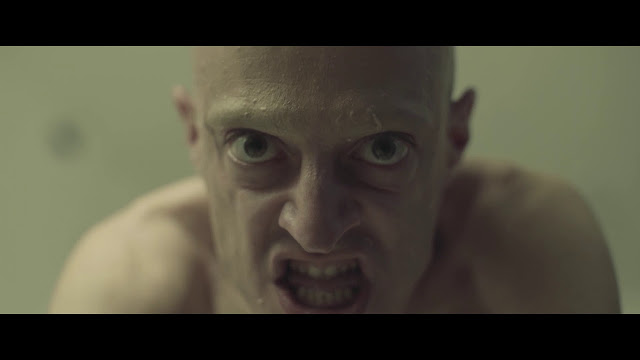 Pharmacophobia - Fear of Medication was the first of a bunch that don't really tell much of a story. In this one a sick man learns something unsettling about the medication he has only just taken. I found this to be a bit bland and uneventful, and thought the soundtrack sounded a bit average. This was followed by Parthenophobia - Fear of Virgins that had a male porn star get a really bad panic attack upon learning his co-star he had to perform with was a virgin. There were some cool distortion effects, and some nice editing of arthouse style shots of bloodied hands and falling, but again it felt like a manifestation of a phobia rather than an actual story.

I fully expected Coprophobia - Fear of Feces to be a disgusting short and it did try to be. This was perhaps the worst one out of the lot in my opinion. A man afraid of bodily waste unconvincingly gets attacked by a teddy bear covered in feces. I really couldn't tell if this was meant to be purposely bad or not, I hope it was as five minutes of a man holding a teddy bear to himself and trying to make it look like it was attacking him was not riveting stuff. Next up was Mysophobia - Fear of Germs that had a man freaking out that he was covered in germs and ends up doing something unrecoverable to escape. This was an example of a film that successfully explores a phobia but then forgets to actually base a story around it, felt a bit pointless.

It is back to cohesive story telling with Mazeophobia - Fear of Mazes. Here a foreign man lost on the back roads of America goes to a bar to ask for directions to the nearest petrol station. The acting throughout this was below average, and I found the ending to be really confusing, but at least it told an actual story, also the outdoors setting was a nice change from the single rooms that most the films take place in. With Astrophobia - Fear of Stars (written, edited, produced, and directed by Alessandro Giordani) I thought the subject would be hard to film, however this is the shining gem of the whole anthology, I loved this one. A man goes insane thinking about the enormity of the universe. This was so well made, and I really liked how innocently the man stumbles into his undiscovered fear (he was just watching some videos his love interest had made on YouTube, and her name just happened to also mean a term about the universe). I also liked the pacing of this with a story starting in the future and then going backwards to show how events led up to that moment.

Mageirocophobia - Fear of Cooking was another short that felt a little bit pointless. In this one a woman preparing a meal hallucinates different things, such as vegetables turning into severed body parts, a fish berating her for planning to cook it, and herself climbing into an oven. I never really got what this one was going for to be honest. There was a Black Mirror vibe with Gerascophobia - Fear of Aging that is set in a world where people are able to body swab to younger bodies. This was a cautionary tale with arthouse elements that wasn't bad, there just wasn't enough time to really explain what this swapping body aspect entailed. 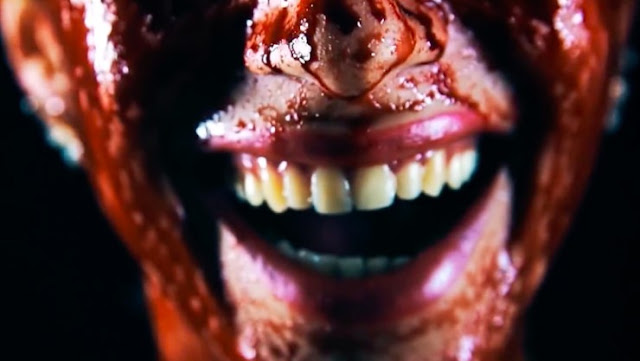 Politicophobia - Fear of Politics was the most abstract and more a performance art piece than a film. This features among its insanity a straight faced politician with clown make-up, a British woman speaking political jargon, and a man feeding a bloody voting slip to a voting box that has a creature inside that eats the slip. Very weird but had an uneasy vibe to the craziness going on. Another bizarre one was Somniphobia - Fear of Sleep about a man working to a deadline who eats drugged food that makes him not want to go to bed. This is mainly made up of a montage of the man doing various comedic things to stay awake such as exercising, drinking coffee and plucking eyelashes, a bit too weird for me.

Still on the subject of sleep with Oneirophobia - Fear of Dreams that has a girl having very trippy nightmares that cause her to go on a fateful sleep walk. This was another one that was very arthouse but I liked the editing, and I thought the music choice was very fitting. A few years back there became a style for short horror films like Lights Out that everyone at the time seemed to try and emulate, Nyctophobia - Fear of Dark is a throwback to those type of films and features a woman who is afraid of the dark who experiences something awful in her bedroom one night. It wasn't bad but it was very familiar in style to many I have seen before. To end this anthology off is Hemophobia - Fear of Blood which has a woman encountering a bloodied version of herself on TV. This was a semi wrap around film in that bits of it popped up at a few different points in between other shorts. I did like that the end credits for A Taste of Phobia play out over the TV in this film. 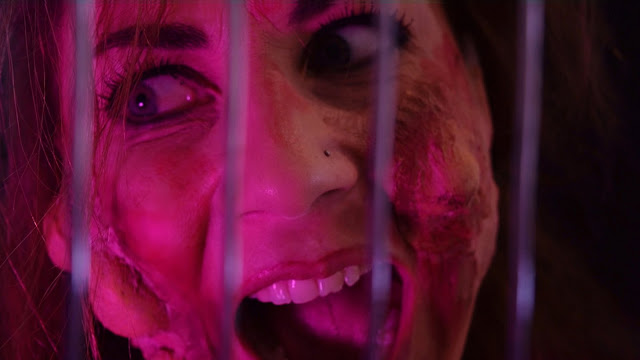 So of the fourteen films on offer here there were only a handful that I thought were good, only really two that I really liked. As this is an anthology though it isn't so bad that some of these are not very good. Fourteen films in 90 minutes means that none lasts more than around seven or eight minutes and so something new is always just around the corner. This is nearly worth watching for the fear of stars one alone. I have seen better anthologies, but I have also seen far worse and so I don't begrudge seeing this collection of gory grindhouse horror. A Taste of Phobia is coming to DVD and VOD on June 26th thanks to the great people at Artsploitation Films.