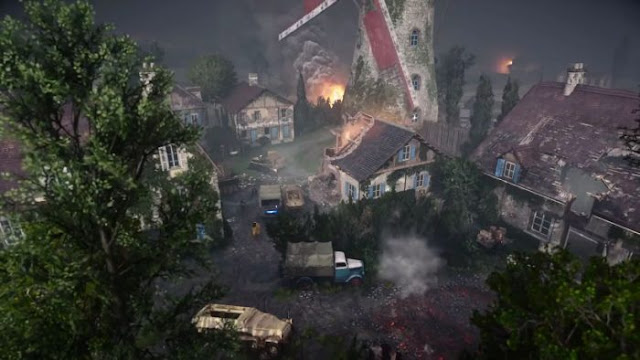 I've made it my task to do at least twenty blog posts per month, something which I feel the need to achieve even when things are more quiet. Last Tuesday came the third DLC map pack for Call of Duty: WWII and so should have been when the third Nazi Zombies map dropped (well technically the fourth). Instead we get The Tortured Path which confusingly is separate from Nazi Zombies and plays quite differently from what I had come to expect. This new mode is made up of three different maps, each map being a different 'chapter' within The Tortured Path. Each map consists of ten rounds, culminating in a boss round, you can only access the other maps once the one previous to it has been finished.

Chapter 1 is called Into the Storm and takes place in a small European village during day time. Compared to the typical Zombies map it is quite small, it consists of some ruined buildings including a windmill and some streets. Because of this small size all areas are opened up from the start, also different is that item boxes on walls are randomised but weapon specific, so each one acts as its own little puzzle box. As you progress through the rounds different weapon types such as snipers and LMGs get unlocked and there is also a way to pack-a-punch the guns. This reminded me a bit of Call of Duty: Advanced Warfare's Exo-Survival mode in that there are different challenges you are required to do in rounds. These include such tasks as repairing three different radios, protecting a location from zombie attack, killing special zombies and a load more. If you fail one of these challenges (that are time specific) then it is game over, nearly every time I failed Into the Storm it was due to failing these challenges.

The plot is much less important this time around, at least with chapter 1. The intro cutscene is brief and mostly made up of static images, it details how all of Europe has fallen to a zombie plague, and how a special task force was created to combat this undead threat. Into the Storm has you as one of four voiceless new recruits that include three men and a woman. Weirdly the intro cutscene seems to cut out before it has finished making it seem unfinished. Also weird is that they have decided to introduce a new levelling system that clumsily co-exists with the previous one. I really don't know why the creators decided to make a whole new Zombies mode rather than a new map in the Nazi Zombies mold, maybe they felt the mechanics were not working in their favour. As it is despite the strangeness of the changes this mode is quite addictive, the ten round limit and the randomised loot and challenges give this a lot of replay value. While the map is a lot smaller it is cool that there are three of them.  Below is my first solo play-through of Into the Storm, I haven't actually unlocked the other two maps yet but as soon as I do I will add to the post with my thoughts on those...it turns out I forgot to actually save my footage of my playthrough, it will be added sometime soon!

Update 1.0 (30/06) - They have now added in voices for the characters in this mode, this has helped add a lot as them being mute felt off. From what I can tell the soldier that looks like he is wearing a general's uniform is American, the camouflaged male is Russian. I think the two women are either English or American but I haven't been either of those since the update so I'm not sure at the moment.

Update 1.2 (26/12) - Months and months ago I unlocked the second two maps that comprise The Tortured Path. The second map is titled Chapter 2 - Across The Depths and takes place on a boat. Again the map is moderately sized, one cool thing with this map is that every now and again the boat will list to the side, this moves crates and vehicles that opens up new routes. A really beat feature. Upon playing this for the first time I beat it and went straight onto the third and final chapter. Chapter 3 - Beneath the Ice takes place in an ancient tomb buried under the ice in the Antarctic. The map is kind of circular with the main tomb being smack bang in the middle.
Posted by Daniel Simmonds at 09:27