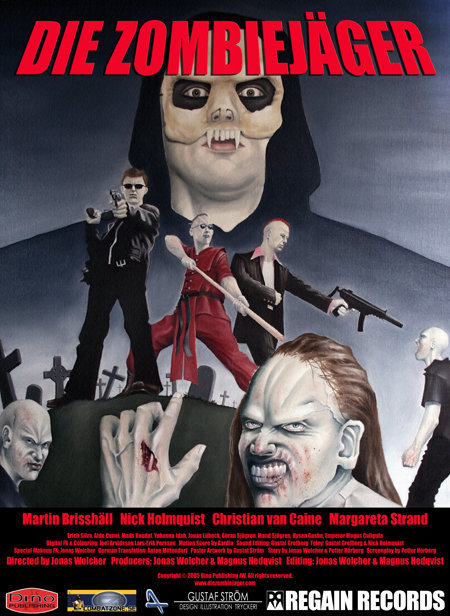 Die Zombiejäger is a Swedish zombie film directed and co-written by Jonas Wolcher (Cannibal Fog). It very much reminded me of the low budget zombie films of the 1990's as it doesn't attempt to tell much of a story, has zombie makeup that goes all over the place in terms of quality, and has heavy rock music play whenever the fighting begins. Loving films about the undead as much as I do I can get on board with this type of messy film making, one of the things I often say with regards to zombie movies is that they fall into one of the genres when more often than not bad makeup actually benefits the picture, quantity over quality I think and here you have quite a few of the undead.

The plot for this is really quite simple, basically there has been a zombie outbreak in Gothenburg. The affected area has been contained and the government have hired three German mercenaries to come in and clear up the mess, so Heinrich, Dieter and Ivo arrive on scene to kill some zombies and along the way uncover a plot that may be far more outreaching than what first appears. 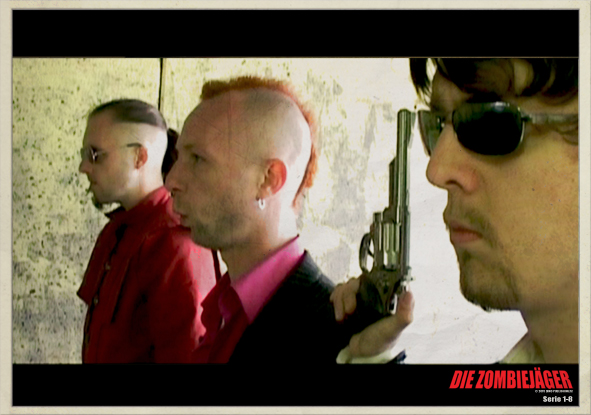 This is a very old school indie zombie flick in that outside of people battling the undead in a variety of cool ways there is not much going on. There are a couple of sub plots but they are mostly inconsequential with it all just being an excuse to battle lots of zombies. Most the film focuses on the three German mercenaries and they have many many fight scenes which usually follow the format of a shot of them firing their weapons and then the camera showing the effect the attack has on the relevant zombie. There are not many parts of the fighting that deviates from this particular style of film making and so there can be a bit of a loss in motion. However I never got bored of these fight scenes, there is a grindhouse/B-movie vibe with the desaturated look making everything seem slightly unreal. I never got bored of the low angle shots of the zombies with the sky usually attractively positioned behind them. There are plenty of guns used, as well as throwing stars and a stick. It was nice to see the CGI was limited, certainly never a moment where I felt things looked digitally fake with most the effects seeming to be practical ones. There are lots of moments of zombies eating random bits of flesh, even eating from their own wounds they have had inflicted.

The undead themselves are varied in how they look with in general a greenish make-up over their faces at the least, occasionally there is more detail on them, and most the time there is plenty of blood. The zombies are slow moving and vary in how they move, some look pretty great, awkwardly shuffling, others do the old fashioned arms out in front style movement. Due to the indie look I loved the style of these undead, the actors themselves never seemed to be smiling (which happens more than you would expect on these type of films!). Personally I didn't really enjoy the soundtrack, heavy rock during action scenes fits the fast paced action but wasn't exactly original.

The acting varies from really awful to adequate, I sometimes felt this was on purpose though. Die Zombiejäger does not take itself seriously at all (the outbreak was traced to contaminated milk cartons for instance). The best examples of the humour can be heard in the dialogue which often sounds dubbed over with characters sounding ridiculous. My favourite part of the film was when a bystander recognises a zombie as 'Kenneth' and keeps repeating the same phrase over and over in a silly voice as the obvious ghoul stumbles towards where she is. The tone reminded me a bit of Acid Head: The Buzzard Nuts County Slaughter but more restrained. The best characters were thankfully the main ones, in particular Nick Holmquist as Dieter and Martin Brisshäll shined, more due to the cool way they carried themselves, and their facial expressions, they felt like protagonists.

The plot as stated was very simple, I did like that there was a mastermind behind the outbreak who appears in cutscenes. I say cutscenes because this felt very much like a video game brought to life, it wouldn't have felt out of place in a cheesy Dreamcast game. There were some nice overlays of this mastermind directing the zombies from behind the scenes. Most the film is battles between the heroes and the undead, there is even an 'end of game' boss battle against a super zombie. I liked the idea that the whole event happening in the film was just a test by the antagonist, it reminded me a little bit of Awaken the Dead in that respect. 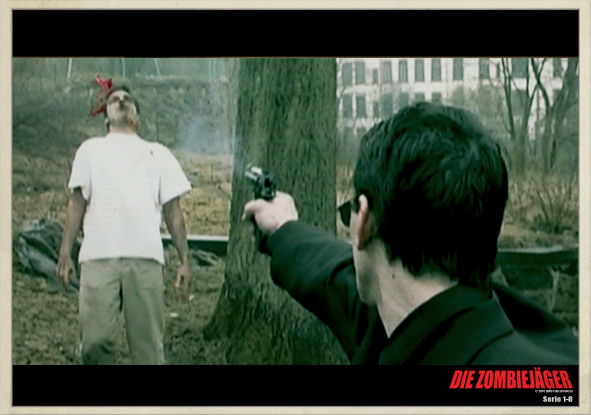 Die Zombiejäger isn't a great film, the budget constraints are obvious while there isn't enough going on to get you much engaged with any of the characters. However while this may not be great it was still fun to watch, sometimes after a hard days work it is good just to switch your brain off and watch mindless action. For me this was nice little bit of nostalgia, a throwback to the times that felt more simple, something that manages despite the limitations to be light hearted, yet at the same time violent, bloody, and occasionally even a little bit funny.