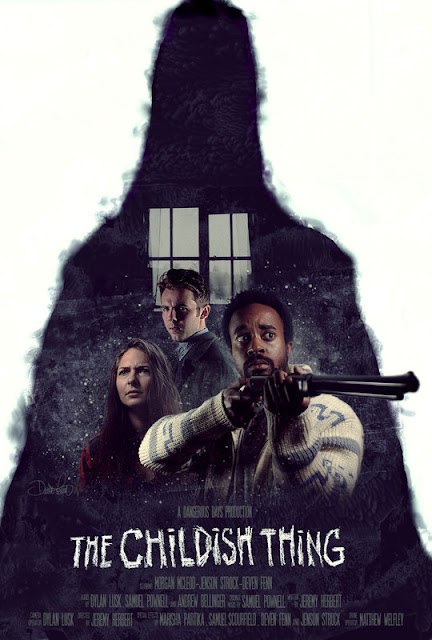 I have been lucky enough to encounter quite a few entertaining short horror films lately, there hasn't been a bad one among them. The latest treasure I got to see is The Childish Thing by Jeremy Herbert and boy is it a gem. They say you should write what you know about and with this short Herbert has done exactly that. The evil of this piece is nearly exactly based on an imaginary monster that terrified him as a young boy when he had night terrors, he has channelled his fear of this creature so that despite the goofy look to it there is something undeniably creepy about the creation.

Jack (Morgan McLeod) is due to move out from his childhood home and as a favour to his mum he has gone there in order to sort out things before the move. While exploring the place he comes across an old notebook from when he was a kid and is reminded of a monster he used to be scared of from that time. This seems to awaken something though and soon he starts to think he can glimpse this nightmare from his past. Thinking he may be imagining things he enlists two friends; Lane (Jenson Strock) and Hal (Deven Fenn) to keep him company, however this creature may actually be a very real threat... 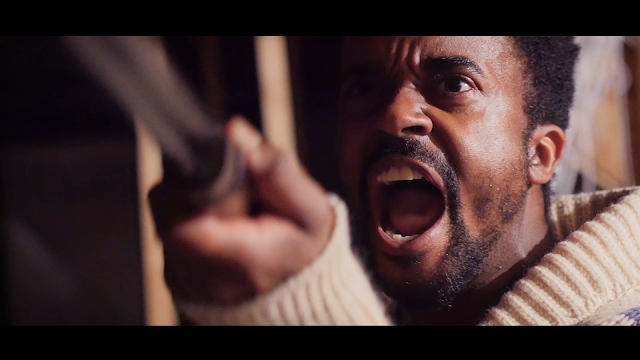 Salt and Iron that I watched the other day succeeded for me mostly due to the great soundtrack, that one element was nearly head and shoulders above the rest of the entertaining film. With The Childish Thing the music is on par, it fits perfectly with the visuals, and the story itself as well as adds so much atmosphere. The main score is very mysterious, it suggests an off kilter The Twilight Zone style influence that makes the sphere that Jack is currently existing in feel out of sync with the rest of the world. This surreal feeling isn't pushed to the side, instead it is embraced and reflected in Jack's interactions with the other characters who also see this oddness reflected in Jack's skittish look.

The star of The Childish Thing is the monster itself, something that resembles a large black fuzzy Muppet, complete with pathetic looking googly eyes shouldn't be able to have any sort of power of fear. It is the respectful way this is shown on screen though that makes it uneasy to look at. The way it operates was pretty cool, based on a child's fears it is able to materialise from any place a child might think a creature was hiding. So it is able to reach out from behind doors, from cupboards, under the bed, even from inside cardboard boxes, and able to do this effortlessly, so can appear instantly no matter where it was last seen. Being a child's idea of a monster means in It style it can be repelled with the same childhood logic, in this case it means a harmless cap gun becomes a useful weapon among other tools. 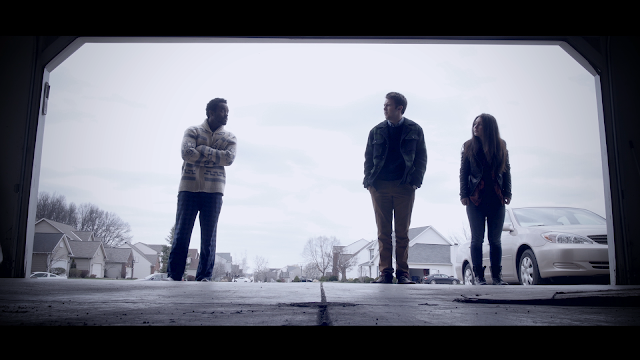 Just because the monster design is silly (purposely) doesn't mean the minimal effects here are bad, on the contrary everything about this shouts quality, from the acting, to the monster, to the directing and cinematography, this was all impressive for an indie film. I guess if I had any complaints about this it would be that ultimately the antagonist here is pretty powerless which leads to a finale that I never quite understood and which felt a little underwhelming. The whole theme of this short is about confronting your fears and so by doing that the protagonist ultimately wins out. This is helped by McLeod in particular who gave a believable performance, the other characters had less to them but brought some humour to the weird goings on. The Childish Thing should be viewed if you get the chance, an impressive 30 minute short.