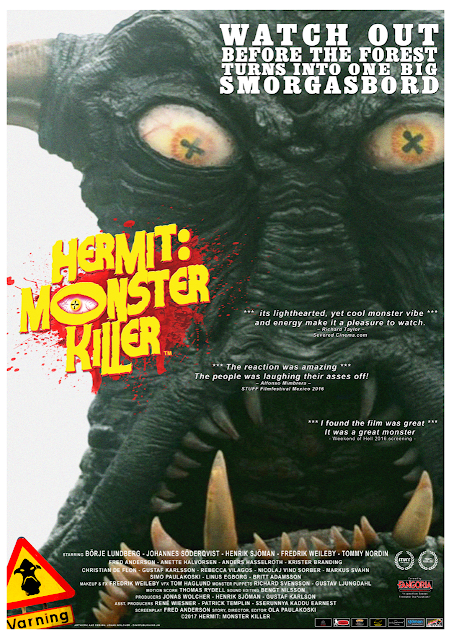 I last mentioned Hermit: Monster Killer back at the start of 2016 when it was nearing release and now I have had the opportunity to give it a watch. This was produced by Jonas Wolcher (Cannibal Fog, Die Zombiejäger) and is a Swedish comedy horror that felt a bit like a creature feature horror from the 1950's.

A meteor crashes in rural Sweden and brings with it a huge deadly monster that seems to exist only to kill. Now the locals each in their own way must find a way to battle and defeat this alien creature, though it seems a grumpy old hermit (Börje Lundberg from Oscar nominated film A Man Called Ove) might be the best prepared... 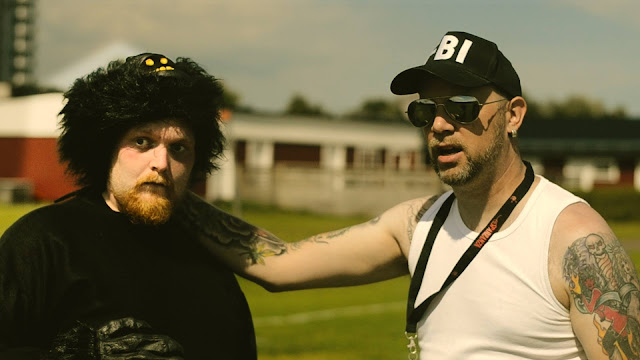 I first started watching this without subtitles, I had thought that maybe knowing the language would not be required. Well ten minutes in I changed my mind, I felt I was missing out and so I requested a version with English subtitles. This is very much a comedy horror in that every single character here is ridiculous in their own way. They are a bunch of oddballs who fit together well with the over the top ways they act. Most the film are various people either trying to kill, or being killed by the monster and so there are a lot of characters who only tangentially meet up with each other. This did give the movie a bit of a disjointed feel to it at times though eventually characters from each of the seperate groups do meet up for a final showdown with the beast. The hermit was the best character as he was fleshed out with a tragic backstory that still managed to have a funny end to it.

The highlight of Hermit: Monster Killer is the monster itself which looks terrible, but in a great way. Its attacks mainly consist of a huge clawed arm coming in from off camera to attack people, when it is shown fully it seems super imposed on, or CGI'd, very fake but this adds to the charm. The puppet used for the head was great, it was simple but I really liked the eyes in particular that had crosses for pupils. There are some terrific death scenes here that were inventive and really quite gory. You have decapitations, limbs pulled off, someone whose head gets split down the middle, even a character who gets their entire face ripped off their head! These all look goofy in a really fun way, it fits in very well with the zany vibe being gone for. 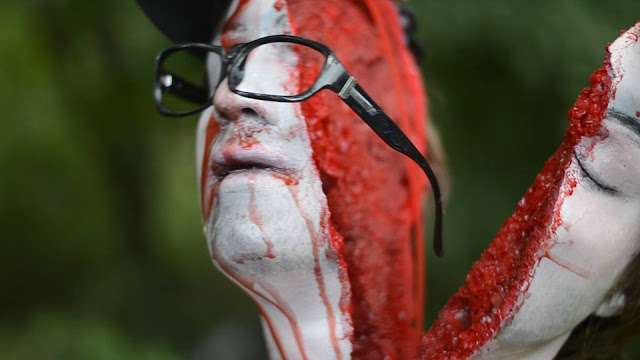 The plot is really simple and is just an excuse for lots of bloody deaths, along the way we get an exciting car chase and several final stand moments and not much down time. I liked how once the monster is sighted that is it, there is nothing that happens that is unrelated to this menace with most scenes involving it. I liked the character played by Markus Svahn, he was a young boy whose frantic running is what causes all the disparate groups to encounter the monster, that was a nice idea. I also liked the group dynamics, especially with the misfit sports team who had a unity that felt real with the amount of teasing going on. I did find that at times this could have benefitted from less action, the scene with the hermit telling the story of his past was a highlight for me and nicely set up the events of the finale.

Hermit: Monster Killer is a low budget B-movie that is well aware of its shortcomings and utilises what it does have to make a fun movie that may have issues with pacing but is never short on entertainment. I could imagine this would be a great film to watch at a festival.