The Rotting Zombie's Round-up of Horror News for August 2018 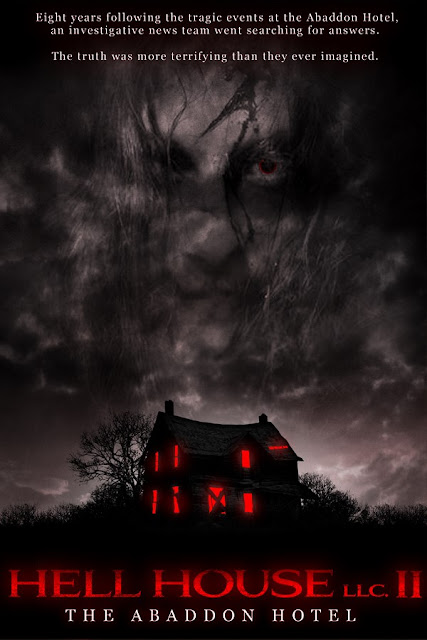 I still haven't gotten used to doing a reduced number of blog posts each month, it always feels like I should be writing one; a feeling I can never really shake. However it has freed up time to do other things such as going to the gym, watching Netflix, and playing far too many video games! It is another busy month with lots to cover on the old news front.

I feel like I have mentioned this before but there is still a GoFundMe campaign running to raise funds for horror comedy sequel Slashening 2: The Final Beginning. 2015's The Slashening was a comedy slasher where a group of friends get attacked and killed by a killer wearing a sack on their head. The sequel picks up five years later where it seems a copycat killer is on the loose. The funds needed are so that the 'big bloody' finale can be made. A music video that is from a song used in the movie has been released. To contribute to the project go here.

Something else I have mentioned before with Throw Anything which is a cartoon like zombie survival VR game that has now came out of early access and received a full release on Steam. There is now a final boss "Mystery Scientist X", a new special mission, an updated lobby that has more interactive elements, new stages, and upgraded graphics and sound effects. The game is out on HTC Vive, SteamVR, and Oculus Rift and a PSVR release is due out later this year.

This next piece of news is pretty crazy in that a new film series is coming out...but all eight of the films in the series are coming out at the same time! The film series is called The Darkest Nothing and is said to cover "Modern cannibalism, extreme BDSM, the COPINE scale of pedophilia, vigilante hunters, trolling, snuff, chemical drugs, rituals, obsession with morbidity, red rooms, uncaught serial killers...". Basically a lot of taboo type subjects. The series focuses on psychiatrist William Jameson and his video studies of extreme behaviour. It seems each film has Jameson exploring a different type of taboo, in the second chapter Gynophagia for instance Jameson comes face to face with a cannibal, while third chapter Ideophrenia has him meet a man known as Butcher who acts in underground slasher movies. Currently Filip Halo and Incubofilms are looking for funding to complete this series of films, any suggestions can be left on their many Facebook pages (one for each film), more details can be found at their website here. I have included the trailer in a previous news post but it is a stylish one so I shall include it again.

Back in October last year I gave found footage horror Hell House LLC a solid 7/10, however it is a film that has really stuck with me, enough that if I were to review it today it would get an 8/10. Due to this I was very excited to hear a sequel was being made, it is quite rare in the genre for sequels outside of the main stream (Creep 2 is the only indie one that comes to mind). Hell House LLC was a mockumentary about the lead up to a horrific event on the opening night at a Halloween haunted house tour that was set in an abandoned hotel. Hell House LLC II: The Abaddon Hotel has journalist Jessica Fox (Jillian Geurts) travel to the infamous hotel to uncover evidence of murder and strange disappearances. Director Stephen Cognetti says of it "I made this film with the fans in mind in hopes that it would answer questions from the original while deepening the overall story". This is due for release on September 14th via Terror Films, for now check out the trailer.

Next, from Indican Pictures is news that 7 Witches has come out this August. Care and Cody are due to get married on an island they have rented for the occasion (someone's doing well!), unknown to them however their special day is the exact same day a 100 year old curse comes to pass and they find themselves fighting a whole bunch of witches (probably seven of them). I can't embed the trailer for this one, but if you head to Indican Pictures website you can check it out (here).

Another new horror now with Death of a Vlogger which is also a found footage horror. In this film a vlogger gains viral fame when one of his videos contains evidence of an alleged haunting. The film is a 'unique mix of documentary and real archive footage' and was filmed on a micro budget by BAFTA New Talent and Michael Powell nominated filmmaker Graham Hughes. It is to be released by Tartan Features. Check out the trailer.

Some smaller news now, first Bellator MMA fighter Steve Mowry has joined the cast of The Harvester, he is to be the titular Harvester itself. Based on a series of graphic novels this is about a hell-spawned killer tasked with harvesting souls for his father; the King of Hell. The film is set to come out later 2019/early 2020.
Meanwhile Michael Berryman (Devil's Rejects, Hills Have Eyes, Weird Science) is to star as Jed Bedford in Room 9. This is written and directed by Thomas Walton, the synopsis being 'life altering sins of the past revisit lost souls in a small town... 40 years later!'. This movie is currently being filmed, more details can be found here.

Dead By Christmas is an upcoming feature film from Reel Nightmare Films that is due for release October 2nd and was filmed on location in Southeast Louisiana. As the title would suggest this is a Christmas themed horror, it concerns a group of friends raised together in a troubled orphanage that get stalked by a killer from Christmas past. Once again check out the trailer for this one, the Santa costume is pretty unsettling!

There is currently an Indiegogo campaign to raise funds to letter and print Book 1 of a 2 part graphic novel series titled Graveyard Shift. It asks a question: 'what if The Universal Monsters were the X-Men?' This is a labour love from Jon Malin (Cable, Thunderbolts) and writer Mark Poulton (Savage Hawkman, Avengelyne). This is due for release in February 2019, it has far exceed it's target but can still be backed here.

Last but not least Jalbert Brother Studios have released their third feature film Terror Talk, it is now available on Amazon Prime. The synopsis sounds fun, a viral outbreak causes a doomsday prepper to retreat into his new house, but soon finds that while he might be safe from the deadly contagion outside he is trapped in a house that is haunted by evil ghosts. I would take my chances with the virus I think! If you want to check that out yourself follow this link.

Ok, so that wasn't actually the last post as I have some breaking news! Alex Noyer's short horror Conductor is to premiere at Horrible Imaginings on September 2nd before beginning a festival run. The seven minute short is about a musical engineer who mentors a young enthusiast through composing a beat for a special competition with horrific consequences.
The short is also to be shown in Provo, UT for the Film Quest Film Festival on September 7th at 9pm.