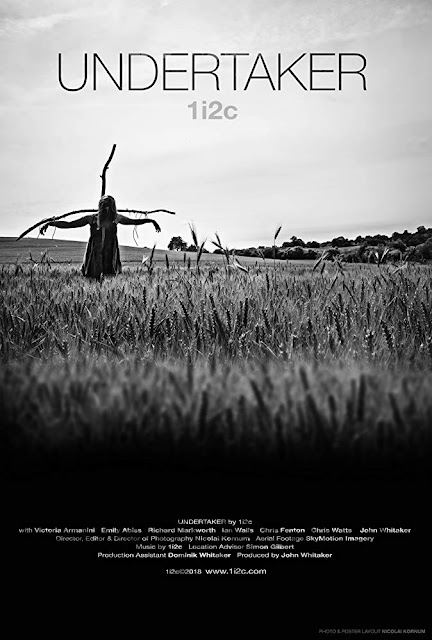 Two short films were created by creator/composer John Whitaker (1i2c) and cinematographer/directer Nicolai Kornum featuring music from 1i2c's latest album "It Should Be You". Yesterday I reviewed Umbilichord and today is the turn of Undertaker. This one has less of a real story to it, instead it is a marriage of visuals and sound that has a lot of nice cinematography to it making the black and white scenes nice to look at.

Whitaker stars as the titular undertaker who is discovered having just dug up a fresh grave and moving the body. What follows is a slow motion chase through corn fields as the music of 1i2c plays out. While Umbilichord was also a mashup of film and music this has less story to it. However this was beautifully shot with some really nice looking camera angles chosen, the standout shot for me being an over head one of a woman falling over into sheaves of corn.

As primarily a short film I don't think I would have enjoyed this as much, and while the music isn't really to my tastes it does blend in well with Kornum's directing. To be fair the video itself describes itself as a music video and in that respect it is successful. To view the other works of Kornum head here, otherwise check out the video for Undertaker below.