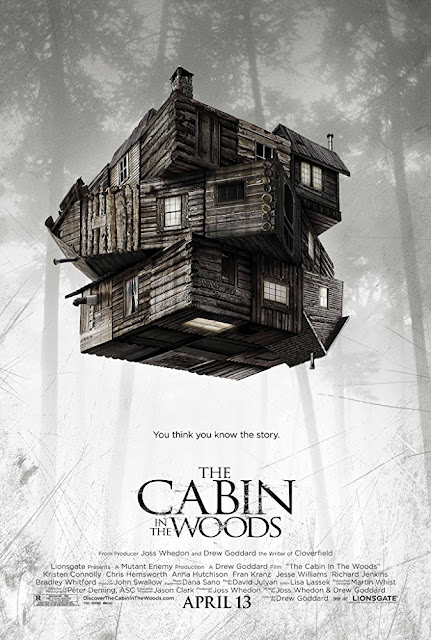 It is a rare day in The Rotting Zombie HQ in that I am totally on top of the films I have been sent for review (well, I was when I wrote this a few days back, now there are four sitting there). As such I have finally found time to watch a horror of my own choosing. I am quite late to the party but today I at last saw The Cabin in the Woods. This horror was directed by Drew Goddard (Bad Times at the El Royale), who also co-wrote this with Joss Whedon (the writer of Alien: Resurrection, Buffy the Vampire Slayer, and Serenity to name just a few).

Five friends that include virgin Dana (Kristen Connolly - The Happening), stoner Marty (Fran Kranz - The Village), jock Curt (Chris Hemsworth - Thor), intellectual Holden (Jesse Williams), and slut Jules (Anna Hutchison) go for a weekend break at a remote cabin in some woods, where they accidentally summon a family of undead cannibal rednecks. However everything isn't as it first appears, the friends have had those horror film stereotypes assigned to them, and their whole ordeal is being monitored by a team of scientists who need the group to die in order to complete an ancient ritual. 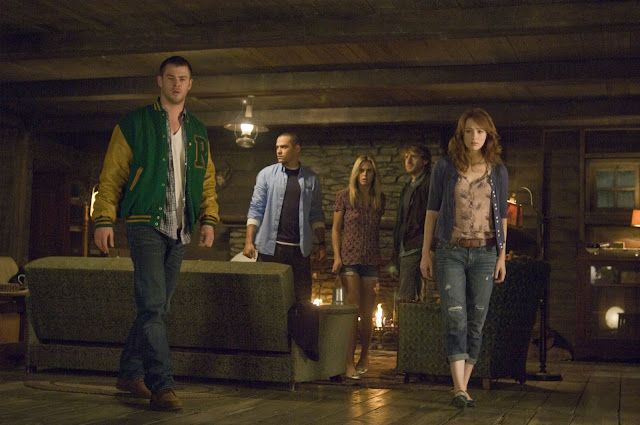 Watching this so many years after release meant that I knew the whole twist of this typical horror movie not actually being so typical. If I remember rightly at the time the trailers hid this fact from the audience. The Cabin in the Woods opens with the scientists in their facility so it doesn't take much to piece together that things are different here. I like how they take what would be a very generic horror film and splice it up with the scientist part. It pokes fun at the tropes of the genre, most evident being the normal teens being brainwashed into fulfilling their chosen stereotypes. It even finally solves the puzzle for why the group in horrors always split up, again due to being mind controlled. It was cool to get involved in the lore of the world and see that every single horror film made could in fact have been set in the same world. There are references to everything from The Evil Dead, to Hellraiser, werewolf movies, and I.T. This behind the scenes look was where a lot of the humour rested, things such as the American branch of this science group taking wagers on which monster the friends will accidentally summon, as well as their competition with different countries own versions running concurrently was amusing. The main other one being shown is from Japan that sees a bunch of schoolgirls being attacked by a typical Japanese ghost girl. Just the idea that every horror ever took place in the same world was something that was neat to think about.

The idea nowadays isn't wholly new, The Final Girls springs to mind as one such similar idea, but here with the ever reliable Joss Whedon on hand for the writing this remains on point and entertaining, even if it is pretty braindead like the films it apes. I was pleased to see that zombies were the monster type chosen, and they had some great makeup effects to them. The kills come swiftly, and the killcount leaps dramatically for the films action packed third act that brought to mind everything from Cube to the video game Portal. This is gory and blood soaked, but not in a way to really bring any terror, again it is all a homage to horror films so on the face of it there is nothing too surprising. Later on some of the creatures that appear are CGI for obvious reasons, but the quality of some of these wasn't the best. 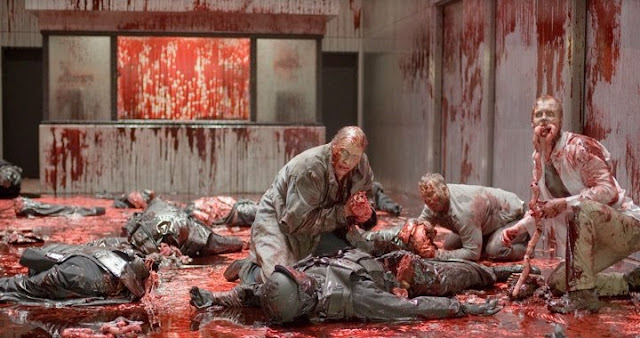 I did like the main cast, but by playing into the stereotypes they don't really have much to them, even when they break out of their roles they are still kind of bland protagonists who had nothing to make me care one way or another if they lived or died. I did like the duo of Bradley Whitford (Get Out) and Richard Jenkins (The Shape of Water) who play the scientists in charge of the ritual, they had some of the funniest moments, such as Whitford's character constantly championing for a merman monster to be chosen as the antagonist. It was nice to see Amy Acker (Angel) and Sigourney Weaver (Alien) showing up in small supporting roles as well.

I did enjoy The Cabin in the Woods, but I feel I did the film a disservice by taking so long to see it. Still, I appreciate what it did, it was a fun, if ultimately a shallow watch. This is currently available to watch on Netflix, so give it a watch if you're in the mood for an entertaining lightweight horror.

Posted by Daniel Simmonds at 02:03