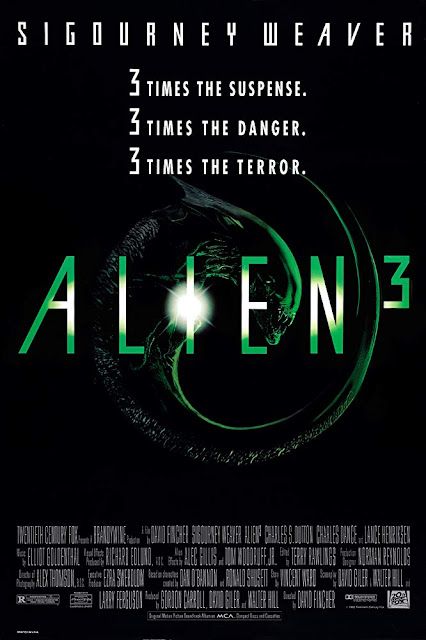 Alien3 has had a bad rap over the years, and not without good reason. This was a movie that was plagued with no end of problems throughout it's troubled production, from extensive script rewrites, to bickering amongst crew, to going completely over budget, this had it all. Director David Fincher (Se7en, Gone Girl) has never gone back to Alien3 and so there wasn't a definitive director's cut, however 2003 saw the release of the 'Assembly Cut' that based a lot of its changes and reworks on what Fincher's original vision for the movie had been. This cut clocks in at 145 minutes, as opposed to the theatrical run time of 114 minutes.

Following on a few weeks (or possibly even days) after the end of Aliens, the film starts with an escape pod crashing on prison planet Fiorina 161. A xenomorph had managed to get on the ship Ripley (Sigourney Weaver - Alien, Aliens), Hicks, young Newt, and the android Bishop (Lance Henriksen - Aliens, Near Dark) had used to escape the alien infested planet from the last film, and had caused its destruction. Ripley is rescued by the former inmates of the prison, who now live there as a religious commune. She is informed that she was tragically the only one to survive the crash. However a chesthugger also survived and has created a new type of xenomorph. Trapped on a weaponless planet Ripley and the inmates must come up with a way to destroy the creature before it kills them all...

I had only seen Alien3 once before and had found it to be very boring. I really wasn't expecting much going back, but honestly, it is not as bad as I remembered. I particularly liked the set design, and while this can be a little slow going at times there is a good sense of atmosphere and bleakness to be found here. That opening of all the survivors of Aliens getting unceremoniously wiped off still leaves a bad taste though. I understand the reasoning but it felt like a snub to the story of the previous film. I have heard it said that one of the reasons Alien3 failed critically was that it ignored the more gung-ho approach of the second film and tried to recreate the slow tension of Alien. Trying to create mystery about a xenomorph that is now a known property was seen as a bad move. However I actually like this aspect of the film. Having Ripley armed with knowledge of how the creatures work, teaming up with a whole band of capable followers led to some exciting scenes. Having to come up with occasionally Scooby-Doo levels of convoluted plans to trap the monstrous killer was pretty fun on occasion.

There are a large cast of characters here, and it was a nice surprise to discover just how many notable actors feature. Brian Glover has a standout role as the warden of the prison planet, his distinctive Yorkshire accent makes his no nonsense character quite memorable, he is backed up by Charles Dance (Game of Thrones, Godzilla: King of the Monsters) as the medical officer, and Ripley's love interest, with other notable characters and actors including Charles S. Dutton (Gothika) as religious leader Dillon, and Paul McGann (Withnail & I, Queen of the Damned), and Pete Postlewaite (The Usual Suspects, The Lost World: Jurassic Park, Inception) as inmates. Ripley herself is treated well here in that she continues to be a bad-ass, keeping level headed, and determined. The plot itself is ok, it's nothing special outside of the unique setting, though has a plot twist that at the time must have been unexpected. 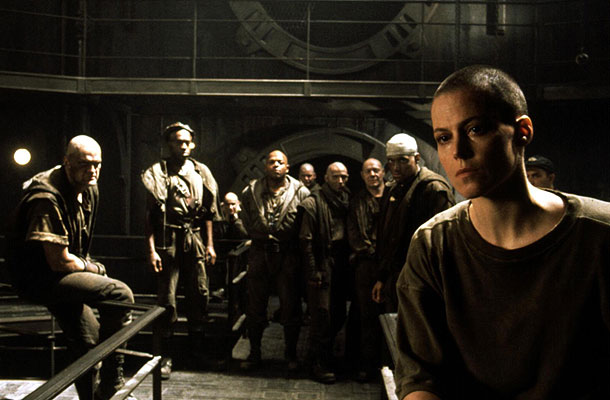 So we have gone from literally hundreds of xenomorphs in Aliens to just the one creature here, and it has had a redesign. This one is more animalistic then what has come before, due to coming from an ox (a dog in the original version, but altered in this cut). The design is good, but towards the second half there are far too many moments of a xenomorph puppet awkwardly superimposed onto the footage. Maybe it looked cool at the time but watching it in modern day it looks atrocious, it looks superimposed to the nth degree and so there is no thrill or tension seeing people run away from something that is obviously not even there. There were far too many of these shots, they made me appreciate the shots when there is actually something physically there far more. All the sci-fi computer type shots, and the miniatures used for scene setting are still decent enough, and there are a decent amount of special effects and make up effects used for the many deaths. My favourite being when someone seems to disintegrate into pieces after being attacked in one scene.

Nowadays there are far worse Alien films out there, as such Alien3 actually holds up better than my memories of it. There may be a terrible looking superimposed xenomorph, and the extended length of this cut does lead to brief moments of being bored, but overall this had one of the strongest senses of place, the sets are huge and decorated well, and the costume design is spot on. Alien3 is still well worth a watch, time hasn't been to favourable to this but it is still a film that any fan of the series needs to see. On a final note it at least spawned a fantastic video game in the form of Alien3 on the Megadrive/Genesis.