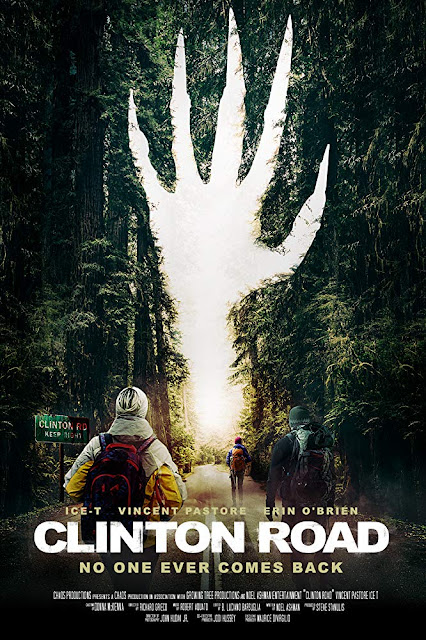 I liked the idea behind Clinton Road (directed by Richard Grieco and Steve Stanulis) even if it didn't exactly sound original. A group of friends lost out in the woods can make for a decent horror. However it soon becomes clear that just like the protagonists here, the film itself is a bit lost and doesn't really know what it wants to do, and ends up just being a bit of an incoherent mess. What is good though is that Clinton Road is actually a real life road in New Jersey, and is said to be one of the most haunted roads in America. Apparently a lot of the accounts and events here are based on real life stories of things people have experienced there.

A year after his wife went missing while travelling on the notorious Clinton Road, Michael (Ace Young), along with his sister-in-law Isabella (Katie Morrison - School Spirits), his new girlfriend Kayla (Lauren LaVera - Iron Fist), and best friend Tyler (Cody Calafiore) head there, along with psychic Begory (James DeBello - Cabin Fever) and his girlfriend. Michael and Isabella hope that the psychic will be able to give them some closure, instead his connection to the spirit world turns out to be an accidental gateway for all the evil spirits haunting the road to come through to attack the group. 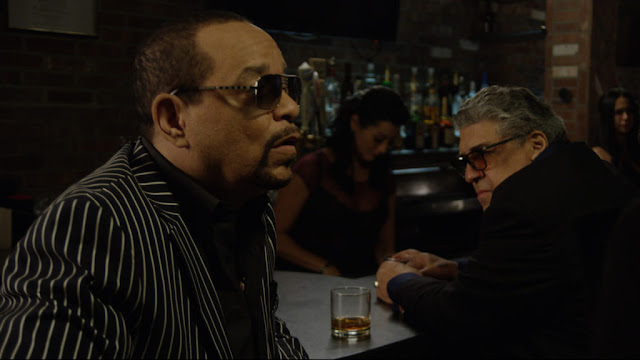 After a star studded start that occurs in a nightclub run by Rj (Ice-T - Bloodrunners), and which felt like it existed only to show off some cameos we head to the woods. It was only later that I came to appreciate this first act. On the one hand it is a jarring contrast to the dark and silent woods, but it also is the only part of the film that feels cohesive. The friends arrive at the woods and within moments all conveniently get separated from each other, barely to ever meet up for the rest of the movie. This leads to three different plots going on, each following a pair as they experience spooky stuff. Tyler and Kayla end up by a river, their sleazy interactions with each other made me think for sure they were going to get up to no good, but that isn't the case. Instead there is a weird sequence that doesn't really get resolved, the movie rarely goes back to these characters. The same happens for Begory and his girlfriend. The reason for everyone splitting up is that the psychic has some kind of fit which gives him visions of all the evil around them. This happens during the day time yet it is soon inexplicably night with him still just sat around not really doing much. This felt like another wasted storyline in that nothing much happens at all. It is Michael and Isabella who become the main focus, which I guess makes sense due to their connection to Clinton Road.

It was around the halfway point that I commented out loud that not much was actually going on. In theory there is scary stuff going on, but the way it is executed just doesn't work. People stumble around the woods lost, with a kind of The Blair Witch Project feeling that the woods are changing around them to make them walk in circles. Michael and Isabella encounter a little girl wearing too much make-up around the eyes and who has an annoying habit of screaming in a distorted way. There is also a huge blacksmith wearing welding goggles wandering around not really doing much. At one point a house is encountered but didn't seem to actually be there, at another point Michael is dragged into a river and flails around in a way that reminded me of Bela Lugosi fighting the giant octopus in Ed Wood's Bride of the Monster. All these separate scenes flow together so badly, there seems no rhyme or reason for anything happening, and I just couldn't care about the characters. The one good moment is when Michael suddenly appears in bright saturated daylight and finds his wife, though in actuality it is still the dead of night and he is laying in a road going insane with fear.

Maybe the plot was trying to be mysterious but it just came across as confusing. The psychic gets some jumbled up visions which I guess could be back story, and there is a nice enough prologue showing Michael's wife being attacked by the blacksmith character. The rest of this is just a jumbled mess, it seemed half the time even the characters had no idea what their goals were. That Clinton Road is based on real life accounts of things experienced there has led to these stories being pushed together into a knotted mess. The spooky girl, blacksmith, phantom car, ghostly hitchhiker all appear and disappear at random, only ever affecting the story going on when it is convenient. It is all backed up with some average effects, while there is a kill count, and the deaths are varied, none of them are interesting, and often they in themself are confusing, such as some characters who just vanish. It all ends on a baffling note also, a slight spoiler, it ends with a character discovering they are holding coins in their hand...I really didn't get the importance of that, or why it was felt that was the perfect way to finish this.

I was disappointed with Clinton Road more than anything, it was frustrating how little sense it made, and seeing how with some slight changes it could have been made into something a little bit more enjoyable. Occasionally there are some good ideas popping through, but these are few and far between. People walking around in the dark not really doing much doesn't make for an exciting movie. Clinton Road has a limited theatrical release and is showing between June 14th and June 21st thanks to the good guys at Midnight Releasing.

Posted by Daniel Simmonds at 08:17