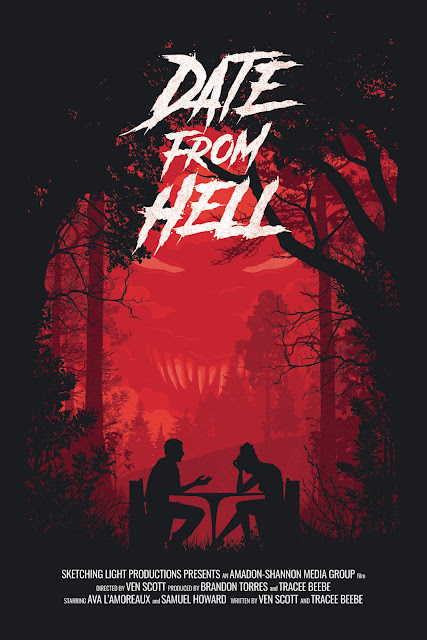 Date from Hell is the directorial debut of Texas based heavy metal frontman Ven Scott (Runescarred, ex-Dead Earth Politics). It takes a story that could have been a feature length and condenses it into twelve minutes without it seeming like anything has been lost.

Locals Susie (Ava L'Amoreaux) and Bobby (Samuel Brett Lee Howard) are on date night in the small town they live in. The two end up drunkenly breaking into an infirmary where they are shocked to discover a serial killer drifter who has murder on his mind. Things are not exactly what they seem though...

The inspiration for this was horror films of the 1980's and this can be seen from everything to the soundtrack, to the premise itself, as well as the lovely practical make-up and effects that also feature plenty of blood. For a short that was filmed over just three nights there is a lot of atmosphere here with no element of the plot wasted. The structure means a lot happens within the run time of the three act structure. I would say that due to later twists I had some confusion over earlier dialogue, which also includes the strange ending. However this twist was what Date from Hell was leading up to and it was executed in a satisfying way with some nice cinematography.

This was an entertaining short that was paced well and had some nice ideas to it, and had an authentic feel to the eighties inspiration. Maybe some of the performances were a little over the top but regardless this was an enjoyable twelve minutes of bloody mayhem. Date from Hell is currently being submitted to festivals across the U.S with the film coming to the online platform ALTER in September.

Posted by Daniel Simmonds at 05:21