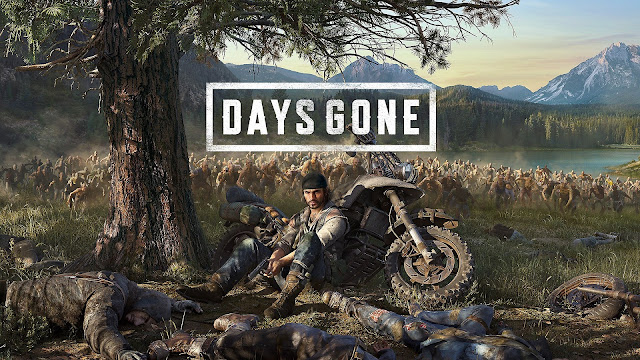 I haven't seen such a disconnect between video game journalists and fans as there is with Days Gone for a long long time. I had pre-ordered this game but scanning reviews the day before it released I was dismayed to see across the board it was getting average reviews, many critics saying the game was simply boring. In the weeks since it has came out though I have yet to see anyone who has played it who has in any ways been disappointed. I don't know if it was due to tight deadlines that led to reviewers zooming through Days Gone as fast as possible being the root cause, or some other baffling reason, but for me, playing the game at a leisurely pace I had an absolute blast and would readily recommend it to one and all. It is a shame to read reader comments after the various reviews thanking the reviewers for saving them from picking this up when in reality they are really missing out on a gem of a game.

This takes place in Oregon two years after a zombie apocalypse occurred that left the vast population of the world either dead or turned into flesh hungry ghouls termed by the survivors as 'freakers'. Biker Deacon St. John (voiced by Sam Witwer - Star Wars: The Force Unleashed) and his best friend and fellow biker Boozer work as bounty hunters for the various friendly camps, though they have aspirations of riding north to start fresh somewhere new. During the initial outbreak Deacon was separated from his wife Sarah (voiced by Courtnee Draper - Bioshock: Infinite) after she was airlifted to supposed safety on a NERO (National Emergency Response Organisation) helicopter after being stabbed, however upon arriving at the camp where she was being taken he and Boozer found it in ruins and full of freakers, so she is assumed to be dead. The game begins with the two bikers plans to ride north nearly finalised, however this is thwarted after Deacon's bike is stolen and dismantled for parts. While he does jobs in order to get the funds and parts to rebuild a new bike he comes into contact with a violent and deranged cult nicknamed 'Rippers', whose mysterious leader seems to have a particular sinister interest in him and Boozer for reasons unknown... 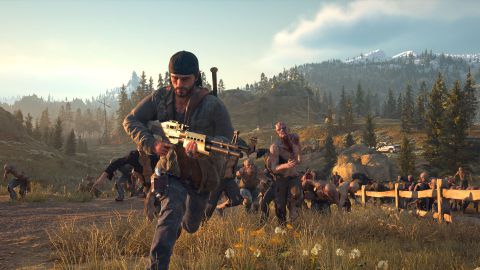 Wow, this was a great game. To sum it up lazily it plays like a cross between The Last of Us, [Prototype] and Mad Max with a little bit of World War Z thrown in. The Last of Us feel comes from the environment itself, the world building here is spot on. Despite its open world nature it comes close at times to the tightly designed areas of that level based masterpiece, this world feels logical, and that includes how the enemies operate. Like that other game the main enemy here are not zombies, but instead the other groups of human survivors, with bandits, rogue militia, and cultists the main threat encountered. The [Prototype] influence is slight, but mostly comes from the audio recordings discovered around the game world that share a similar serious vibe to the ones from that po-faced game.  The Mad Max part comes from not only the look of the cultists (whose self inflicted injuries, and shaved heads reminded me a lot of the War Boys from that game), but also from how integral your vehicle is here. Both games start with the ideal version of your vehicle being stolen and broken down, with a lot of the R.P.G elements revolving around you buying better upgrades to repair it. Deacon's motorbike is essential for traversing the large open world, and as you progress it becomes faster, more durable, and able to hold more and more ammo. Finally World War Z is felt by the way the zombies operate.

The first gameplay demonstration I saw of Days Gone was of Deacon being chased through an abandoned sawmill by a horde of running undead, they seemed to be like a wave, relentlessly pursuing him wherever he went. I wondered how on Earth you would be able to survive in a world like that. The second gameplay demonstration in a completely opposite way was a slow paced, stealthy infiltration of an enemy camp, with zombies being in small numbers. I was puzzled which of these two faces this would turn out to be. Well, it is a combination of both, but stealthy infiltrations, and cover based shooting is the order of the day here. Each area of the game world has a set number of 'hordes' which roam around, taking refuge in caves during the day, and coming out at night. Apart from a few story missions that directly task you with fighting these, the hordes are almost optional. When you do encounter them you better be prepared, or at least have some later game weaponry as if your not careful, or a little over confident they can overwhelm you and kill you in moments. 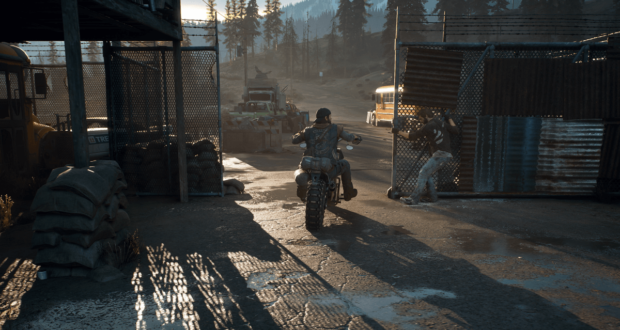 The progression of the game sees you doing various missions for the different camps, with a whole host of different storylines going on. A lot of the side quests really do just feel like side quests with many of them being quite similar. Mostly you are tasked with going to an enemy camp to either rescue a kidnapped person, kill the camp leader, or retrieving stolen goods. All of these play out the same way so it is lucky the combat and stealth is so satisfying. Even a lot of the story missions don't really have too much deviation to them, though as the game goes on these story missions get more and more involving, changing up what you are doing. Such as acting as a sniper lookout at a dam to protect a character doing things there, or defending a friendly camp from enemy attacks. As you help out camps you level up their trust in you, this leads to the option of buying better weapons, as well as better upgrades for your bike. Deacon himself can also level up his abilities, nothing too fancy, but traditional upgrades, such as having a larger area show up with your scan ability, quicker time at looting cars, and the ability to hold more crafted items.

Like The Last of Us Deacon can craft items, everything from explosives such as pipe bombs, Molotov's and grenades, to traps such as proximity mines, and remote controlled bombs can be made once the ability is unlocked. Your bike also needs to be kept full of petrol, and in good shape. It might seem fun to mow down zombies while riding around but it causes damage to the bike! Combat is satisfying and fun to do, while you also have a 'bullet time' style option to quickly get kills. The lore of the game is that the virus is cross species, while initially the main zombie types are human and child zombies (so refreshing to see zombie children in a game like this!), you also get a variety of animal undead to fight. These include wolves, ravens, mountain lions, and even zombie bears, all of these were nice additions, and I would be interested to see what else gets added in any potential sequel. Of the human rotters there are some variations with these as well, such as the screamer which summons zombies, and depletes your stamina gauge, and a muscly zombie type who is a powerful bullet sponge. 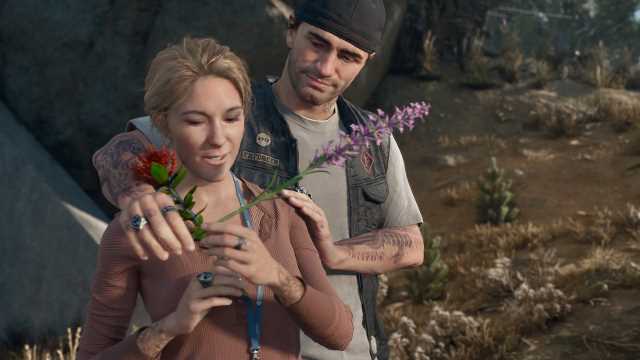 All this and I haven't even mentioned the heart of Days Gone; the wonderful characters here. At its heart this is a love story, with Deacon's attempt to move on with his life after the love of his life died. Deacon himself is a great character, though flawed, his self involved attitude is at odds with what I wanted him to be. He has great interactions with the other colourful characters. From the religion obsessed general of the local militia force, to the various characters of the camps a real sense of world was created here. You even get to really feel the loss Deacon has with quite a few flashback missions that not only show what happened the fateful night Sarah was taken away from him, but even going further back pre-apocalypse to show how they met, and the key moments along the road to them falling in love. These flashbacks really worked in giving a real emotional pull to the story here. A game where you can have a bisexual woman in a mixed race relationship and it not seem forced, just shows the maturity with the way these characters are handled. All helped with great voice acting that was universally excellent. I would say though the initial story involving the leader of the cult wasn't too satisfying by the odd decision to have the character you're playing as have his own aware backstory for why the leader is after him, but then only revealed to the player later on by random conversations characters have. I felt a flashback sequence to show his relevance would have made you more involved.

I need to wrap up this over long review, other things to quickly mention then. The graphics are stunning here, and this has some of the best weather effects I have seen, especially with the rain and snow effects. The rain turns the roads to mud with your bike slipping and sliding around, the snow settles on the characters, while you leave behind footprints wherever you go. Days Gone is a large game, I think it took me between forty to sixty hours to finish. A mild spoiler but it was great to discover that what I thought was the end of the game was only really around halfway through, with the game world suddenly increasing in size by about another third. The music is fantastic and really fits the mournful vibe well, like Red Dead Redemption at a few points as you're travelling to a new area for the first time actual songs play out as you travel that give emotion to these parts. There is loads of stuff to do in the world also. Like Ubisoft games each area is full of points of interest and side objectives to do. Everything from destroying freaker nests, to securing NERO checkpoints, and collecting local flowers help flesh out this place into a living, breathing world. 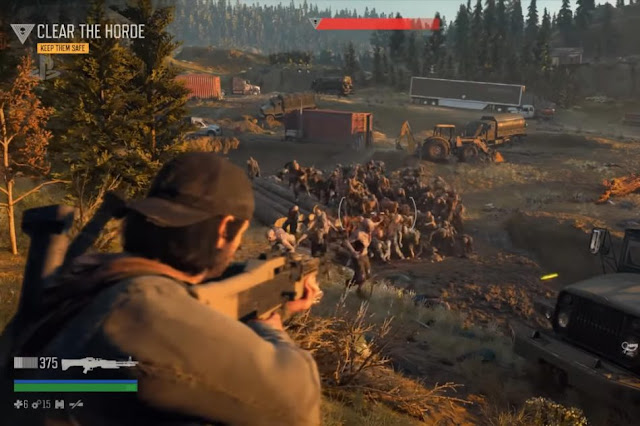 All said and done Days Gone exceeded my expectations. It features a really well told (if slightly generic) story, a solid cast of characters with great voice acting, great graphics and music, and fun gameplay loops. For once ignore the professionals, I really don't know what Kool-Aid they were all drinking, this is a fantastic game that gives you so much value for money. Highly recommended!