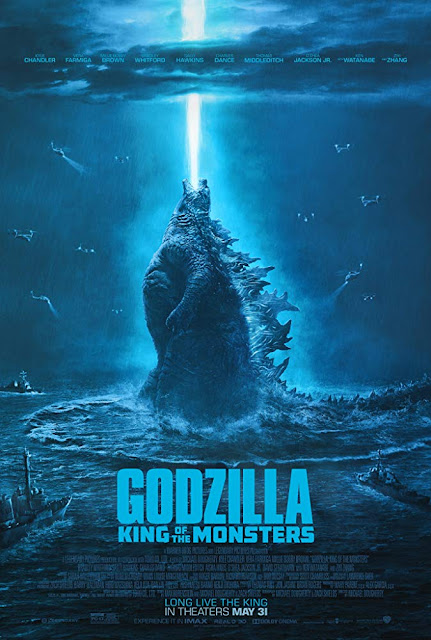 2014's Godzilla somehow managed to be as dull as dishwater, the only things I really remember about it was sitting there wondering how you could make a giant monster movie and have so little of the giant monster in it, and noticing a couple bringing in their newborn baby to the cinema, only to leave around fifteen minutes later with the screaming infant, presumably after it's eardrums were ruptured by the loud screeching and wailings in that movie. Still I had heard that Godzilla: King of the Monsters was actually a lot better and so I was prepared to give it another chance. To be truthful I didn't even realise this was a sequel to that first one, but it is, and apparently part of the 'monster-verse' or whatever they are calling it, along with Kong: Skull Island from 2017.

King of the Monsters takes place four years after the events of the first film which left San Francisco a smoking ruin. Giant monsters, or 'Titans' as they are called here are now known to the world, which struggles to decide how to deal with this emergence of super beasts. During that disaster Dr. Emma Russell (Vera Farmiga - The Conjuring films, Bates Motel) and her then husband Mark (Kyle Chandler - Super 8, King Kong) had developed a device that allowed Titans to be pacified. Now in the present day an eco-terrorist organisation led by Jonah Alan (Charles Dance - Game of Thrones, Pride and Prejudice and Zombies) kidnap Emma, as well as her daughter Madison (Millie Bobby Brown - Stranger Things) in order to use her knowledge of the device to wake-up the many Titans in a state of hibernation around the globe. 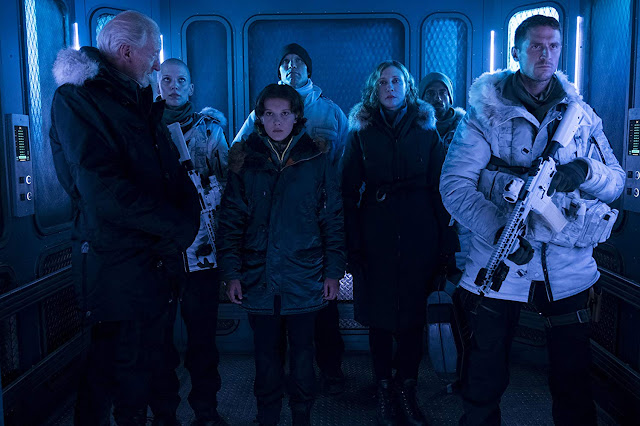 So if you came to this expecting an intelligent, sensible movie you obviously came to the wrong place. This is a special effects laden disaster movie that thankfully features not only no end of giant monsters fighting each other, but also a whole bucketful of monsters. It's a globe trotting adventure fantasy that takes in such disparate locations such as Antarctica, Mexico, Boston, and even ancient underwater cities. Switch your brain off for the ride and you will be in for a treat. For whatever reason giant monster movies are something I always manage to find dull. With a two hour running time I will admit around twenty minutes before this was over I did start to get kind of bored. That isn't to say this is boring though as there is no end of crazy shenanigans going on. Of the many, many human characters it is the monsters obviously who are the stars of the show. While the cast of characters feature a whole bunch of recognisable faces they for the most part serve no real purpose other than serve as walking talking commentators on the monsters all battling each other. I'm not sure how many actors returned from Godzilla (three apparently), but who did for sure is Ken Watanabe (Godzilla, Inception) who reprises his role as Dr. Ishiro Serizawa. He was the stand out character on the human side, and he is rewarded with what is perhaps my favourite scene of the whole movie. Early on there are twists with good characters becoming bad, that was interesting. Less so is Dance whose bad guy role isn't anything special, so much so that he disappears two thirds through, assumedly returning in a future movie in the franchise.

Onto the monsters then. So Godzilla here is again cast as the good one of the bunch. My memory of the first film is very slight, but here he has a cool design to him that when he charges up his blue flame breath (whatever its called) it charges up with his spines acting as a meter. I really loved the sound effect used for this ability, and it gets better as the film goes on with him later getting an even more ridiculous and fun attack. Helping him is Mothra; a giant moth whose glowing wings makes it look like an angel or something. The appearance of that one was my second favourite moment of cinematography here. While there are a fair few monsters shown (mostly via video camera from around the world) the main foes here are Rodan and King Ghidorah. Rodan is a huge lava bird that gets a great scene of causing total carnage with a fleet of fighter jets, and which can cause shock waves via flapping its wings. Ghidorah is the main bad monster here, it resembles a three headed dragon that can regenerate lost heads, and breathes lightning out its mouths. It also featured in my favourite looking shot of it sat on top of a volcano, with a large cross in the foreground to make it seem truly demonic. The fight sequences between these creatures are some of the highlights here, though I always felt it was more exciting when humans were also involved.

There are no end of special effects here, and I was prepared for scenes of true devastation. I have seen films about nuclear annihilation, about zombie apocalypse, and King of the Monsters may just be the first one I have personally seen about giant monster apocalypse. With Titans emerging all over the world it felt like a disaster movie more than a monster movie at times. It is a shame in terms of spectacle that a lot of the monster fights take place in either remote locations (such as the sea, or Antartica), or deserted locations (such as Boston that we are led to believe had a successful 100% evacuation). It's nice seeing such sights as skyscrapers casually getting obliterated as these beings brawl, but it sure felt convenient that mostly deserted locations are used. The plot is dumb as you would expect, but it wasn't too bad, I did question certain decisions, such as a later part of the story being the search for Madison by a whole team of soldiers, hardly the most important thing they could have been doing I'm sure. Also sometimes the script can be pretty terrible, such as the moments of trying to inject humour. A fighter pilot ejecting from his plane only for his ejecting self to be eaten by a monster = funny. A character mishearing 'Ghidorah' as 'gonorrhea' not so much, in fact was my one true eyeroll of the whole film.

Godzilla: King of the Monsters succeeded for me mainly due to the fact it was everything Godzilla should have been. It just shows that actually showing the monsters, and giving them respectable screen time can make for a movie that is actually not too boring, and least in comparison to that snooze fest of a first film. No end of special effects could hold off the boredom for me, but it is a huge Godzilla sized step in the right direction.

Posted by Daniel Simmonds at 05:40