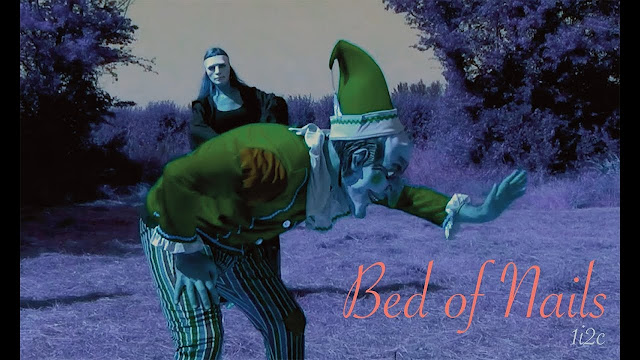 Composer/producer John Whitaker (1i2c) is back with another music video/horror film mash-up, this time Bed of Nails which is taken from the new album 'Special X'. His previous hybrid Zombie I reviewed back in March of this year, and enjoyed the combination of his pulsing music and good camera work.

A woman (Carys) runs into a field, pursued by masked figures who soon easily catch her. While this is happening a cavorting group of masked and hooded folk musicians dance into this and together they all restrain the poor woman within a memory foam mattress. Then the titular item is created.

The most striking part of Bed of Nails is the wild distorted colours that give everything the feel of an alien world. The woman, and the figures chasing her have a skin tone that I would describe as 'duck egg blue', while the fields and trees are all various shades of purple. This all gives a quite trippy visual effect that really completes this short. I did find the memory foam mattress to be a bit jarring though, with the fantastical costumes the characters are wearing, and the wild landscape, to then have a plain white mattress as the focal point was a bit off putting.

The music that accompanies this is 1i2c's usual droning, urgent beats that works so well in conjunction with what is occurring on screen. The musicians exaggerated dancing and playing of their instruments, and later their playful hammering of nails gave a fun vibe to this. Bed of Nails is another decent video from a director who can never be accused of not making shorts that almost demand instant replays to take in everything that is being shown, and I have to say, I do love those costume designs. Check it out here.