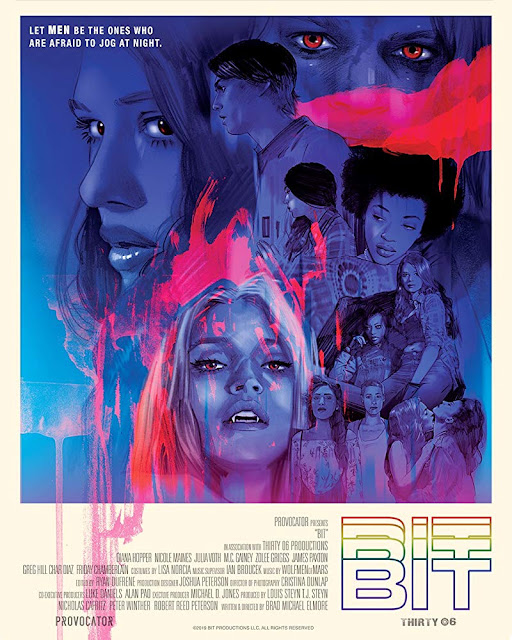 I have never really minded the vampire genre of horror films, and it is one genre that has really benefited by getting with the times. As fun as the classic Dracula style stories are its when the mythos of the monster is brought into more modern times that the genre really shines. Films such as The Lost Boys, Near Dark, Stake Land even to an extent What We Do in the Shadows all take a look at just what sort of people these creatures would be nowadays. With a feminist angle to it Bit (directed and written by Brad Michael Elmore - The Wolfman's Hammer, Boogeyman Pop) feels very much of the time. Thankfully it never seeks to stuff its message down your throat but instead focuses on a smooth story.

18 year old Laurel (Nicole Maines - Supergirl) has headed to L.A for the summer to stay with her brother Mark (James Paxton - Boogeyman Pop) while she tries to work out just what she wants to do with her life. It is here that she catches the attention of the intense Duke (Diana Hopper - Goliath), and her all female gang. To Laurel's surprise she discovers that the girls are all vampires, and due to having a fondness for her, Duke decides to give her the choice to join them. All she has to do is follow the two fundamental rules - no glamouring other vampires, and no turning men. 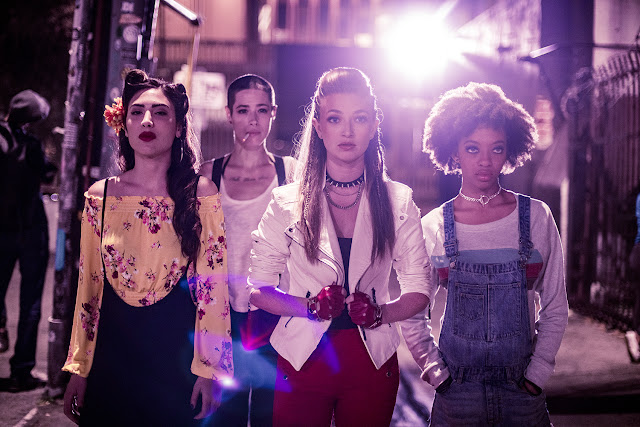 This was a cool movie in that this was the intention it was going for. There is no end of stylish moments, whether it be the club the gang own that plays girl fronted punk music, or the great flashback sequence that shows Duke and her former master in a montage of sorts set during the 70's. These are self confident characters who feel very empowered, and also men hating in a way. Duke believes men would be too power hungry if they ever got to become vampires, and sees the perks of being one as a way to not only equal the sexes, but as a way to eventually put women on top, semi jokingly saying her goal would be to have every woman on Earth a vampire. Despite all this the film isn't preachy, it is more just the viewpoint of certain characters, which is counterbalanced by others, and by the fact that the vampires choose victims who they see as deserving of their justice, rather than indiscriminate killing. Despite all the gang seeming to be gay, and with the character of Laurel being mentioned as trans in all the press for this (Maines herself is trans in real life) this wasn't a part that seemed integral to the story. It seemed more a cautionary tale about self involvement to the point of damaging those around you that actually care about you, and need you.

While I did enjoy this more than expected it was strange that the story only really picks up speed with just fifteen minutes left to the credits. Before this it was like The Lost Boys but following the gang around rather than the ones after the gang, or like the first half of Near Dark before it is realised just what scumbags the characters really are. Here though there wasn't a feeling of dislike for any of the characters, this made some stuff that happens on screen a bit over the top and undeserving as even what I guess the secret antagonist became to be I didn't feel deserved their fate. For the most part I quite liked a lot of the characters here, though some of the gang didn't really get much time to develop more than just being on screen a bit looking self assuredly cool, and I really thought Laurel's brother was very mundane. There is quite a bit of blood here, never gallons of the stuff, but it always looked nice. From the typical neck bites to throat slits, and people getting their hearts ripped out their bodies this did have nice enough special effects. Towards the finale it almost gets a little too cheesy, though Greg Hill has a scene stealing part which made me regret his character not featuring in this more. 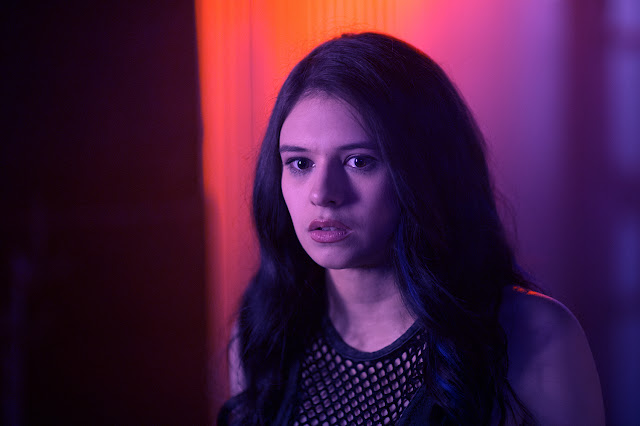 The vampires here skip a lot of the restrictions you would typically expect, in fact it seems the only downside is a thirst for blood, and being extremely flammable. In addition to mind control and retractable claws and fangs these ones can fly, and some can even shapeshift into animals and mist. The vampire scenes are kept to a moderate minimum with some of the bigger acton scenes taking place as a mid film montage set to female fronted rock. The music in general was quite enjoyable, a punky type of vibe going on that went well with the grimy set design that wouldn't have looked out of place in a Rob Zombie film.

Bit was an enjoyable enough horror film, it mixes the tropes of typical vampires into a modern day setting well, feeling at times like this generations The Lost Boys. It is at its best when it is exploring characters as the meat and bones of the story over all wasn't that well developed due to its late appearance. Still, if you like your vampire films and female empowerment then Bit is definitely worth a watch, its cool, humourous and a good fit for modern times. Bit screens on July 26th at the TCL Chinese Theatre as part of Outfest.