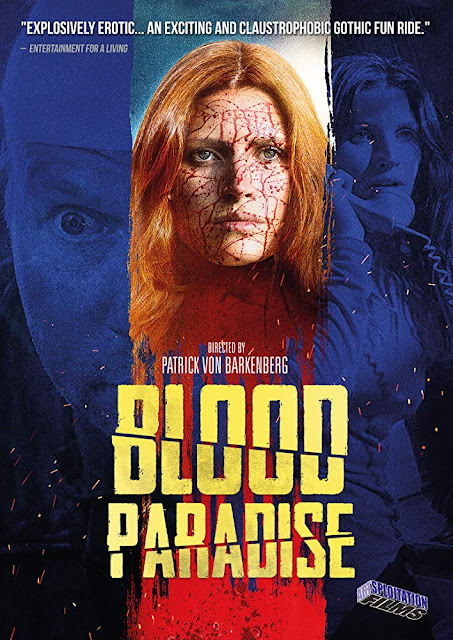 I do like it when films I cover in my monthly news round-up later on down the line get offered up for review. Such is the case with Swedish horror comedy Blood Paradise which I first wrote about back in November of last year. This was directed by Patrick von Barkenberg who also appears in a secondary role here, and it was written by both him and Andrea Winter (who stars in this).

After acclaimed best-selling crime writer Robin Richards's (Winter) latest book flops her publicist sends her away to the Swedish countryside hoping it will inspire her back to greatness. The location chosen for her is a dilapidated property on a farm that is owned by a creepy farmer. She soon finds that everyone around her in her new surroundings have their own oddities, from her driver Hans Bubi (Christer Cavallius) who turns out to be an obsessive fan, to the farmer's sinister sister and son, something really isn't right with the place and Robin starts to see the whole trip as a bad idea. 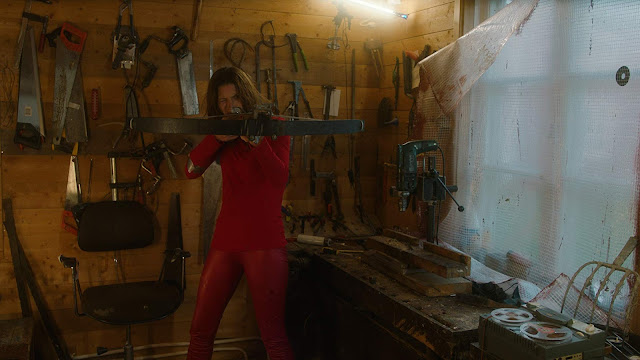 I really wanted to love Blood Paradise and at times it came so close to me feeling that way. However there are moments here that led to frustration with how the story was playing out and being told, though some of those might not even be the fault of the film at all. There is a mild slasher vibe going on, with it made clear not that long in that there is a killer on the loose. I liked how it wasn't immediately obvious who this killer was, and with every character Robin meets weird in their own way it was easy to believe it could have been any one of them. This straddles the line between being a comedy and a horror though which sometimes leads to a surreal mish-mash of the two genres that gave me a feeling of The League of Gentlemen. For the most part this is an English language film, but there are moments when characters speak exclusively in Swedish with no subtitles present. I feel a bit wary about mentioning those parts as I'm not sure if it was just the screener I was provided with that had no subtitles, or if it was the intention of the director to keep these few scenes subtitle free. This mainly came into play with a subplot involving Bubi and his psychotic plant obsessed wife. Despite not being able to understand what they were saying to each other I still felt it was easy enough to get the gist of it. This language barrier works later on when Robin is encountered with a character speaking in Swedish to her, it allows the viewer to identify more with the alienation she is feeling.

There is an undeniable feeling of unease during moments here with plenty of times when characters are either seen secretly observing other characters, or when the camera is set up in such a way to make the viewer feel like a hidden voyeur. It leads to comedic moments such as when Robin goes skinny dipping and has her clothes stolen, leading to her being forced to do an awkward naked run back to her home past the gaze of onlookers. It has sensual moments with Robin often without clothes in a way that didn't feel sexulised. There were also moments that wouldn't seem out of place in films such as Psycho, which is at least a partial inspiration for certain scenes here. With an ominous converted barn near Robin's place this also manages to fit in an element of Gothic horror, the mystery of just what is going on in that barn being a recurring plot point here. There are moments of horror here that can be quite strong at times, in particular a part including a severed finger was a little bit gruesome, yet again darkly humorous at the same time. 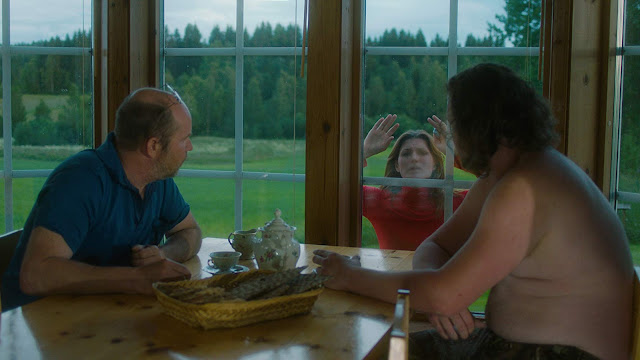 This had a small cast of characters, but most were essential in their own ways. Robin's ridiculous boyfriend Teddy (von Barkenberg) and Bubi had the bigger secondary parts with the owners of the farm mostly silent, in fact I'm almost certain some of these characters don't even have speaking parts. Winter is great as the lead here, again being on her own for much the run-time you never really get a good idea of just who she is, but she is an interesting lead to follow, and it was interesting how up herself she is due to the fame she has gotten. I was frustrated with where the story went, in particular I didn't enjoy the ending, or rather how open ended it turned out. Saying that the actual final two ending scenes were very good, I just didn't necessarily like how the plot wasn't really resolved.

I would be lying if I said I wasn't a little bit captivated with Blood Paradise whilst watching it. There was a well crafted feeling of unease here, and it had some striking moments of sudden violence that straddled the line between modern day filmmaking and capturing the spirit of slashers of yesteryear. At times frustrating, at others intriguing this was a decent enough movie, but it didn't really have the spark to be a classic. Blood Paradise was released on DVD, Blu-ray and VOD on 16th July thanks to Artsploitation Films.

Posted by Daniel Simmonds at 11:34