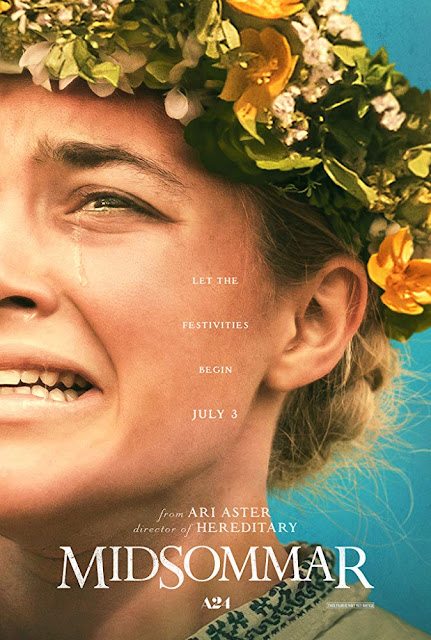 Midsommar is the latest film from Ari Aster whose previous film Hereditary was touted at the time as being 'this generations The Exorcist. Well it certainly wasn't, but it was a very well made film full of great acting, directing and cinematography. I was excited to see Midsommar mainly due to the fantastic trailer. It's an example I wish more people would follow as it was not only superbly edited, but it also gave the tone for the movie without actually spoiling anything at all.

Christian (Jack Reynor - Transformers: Age of Extinction) and Dani (Florence Pugh - Malevolent) are in a relationship that has really ran its course, her boyfriend mainly staying with her out of a feeling of duty due to her anxiety problems. Dani's family are discovered dead in horrific circumstances not long before Christian was due to go on a holiday that he hadn't told her about with his college friends. These friends include Josh (William Jackson Harper), Pelle (Vilhelm Blomgren) and Mark (Will Poulter - Black Mirror: Bandersnatch). Due to her intense grief at her loss he feels obliged to invite her along, not expecting her to say yes. Pelle was from a remote pagan community in Sweden and has invited his friends to attend the annual summer festival held there which includes a variety of pagan rituals. Initially these rituals appear odd and vaguely humorous to the visitors, but they soon start to take on a more disturbing tone, and the friends begin to regret ever coming. 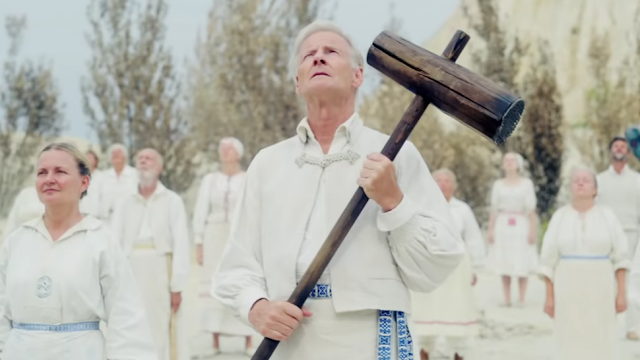 So to lazily sum up Midsommar it is basically a Swedish The Wickerman. To be fair though that isn't a bad comparison to make. Both films feature a remote pagan community, both feature plenty of singing, and there are elements in terms of where the story goes that feels quite similar. This really was quite the experience, and at two and a half hours it was something I totally got sucked into. I also was in two minds as to my actual thoughts to it, I left the cinema not really sure if I didn't like it, or if I thought it was an amazing film. I'm veering towards the later quite heavily now. There are some brutally dark moments tucked away in here, not least the traumatic prologue that shows the aftermath of the tragic event that took Dani's family.  There are some very surreal moments, helped by characters frequently taking mushroom tea that adds to the strong dreamlike atmosphere of the land where the sun never sets, this includes what is probably the strangest sex scene I have ever seen in a movie. On that side of things this features both male and female full frontal nudity which is used within the context of the story rather than ever feeling like it was there for titillation. I would describe this as a disturbing film, yet not one that ever felt scary. Despite dark things going on there was never really a feeling of peril. This is helped in that much of the darkness that resides within the commune occurs off camera. On the surface (and on the screen) it is all joy and brightness, with the dark underbelly mostly unseen by both the protagonists and the audience until it's too late to escape.

After the very start the whole film takes place in broad daylight, and it is quite the slow burn. The camera is happy to linger on shots which really builds up the atmosphere and the feeling of otherworldliness. Perhaps my favourite moment of the film in terms of camera work was when the friends are driving to the village. The camera following the car swoops upside down as it follows, the ground becoming a minor part of the shot which is mainly filled with sky.  It is this soaking in the atmosphere and scenery that really makes Midsommar feel like something different. Technically nothing much really happens considering the long run time, and yet it was this that allowed me to really become absorbed into the strange world of the commune. Another key component of really drawing in the viewer is the fantastic soundtrack which all takes place via characters in the film singing and playing instruments. This is a unique sound that manages to be strangely unsettling, yet happy at the same time. Often it is integral to the plot, such as the weird song a chorus of naked females sing during that bonkers sex scene, and the mesmerising maypole dance which is one of the big moments of the movie. 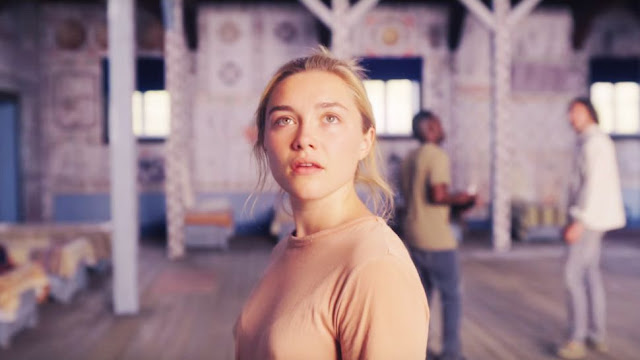 So how does this factor into being a horror then? In total I would say there is less than ten percent of this which is onscreen proper horror, but the moments when they come are powerful. I won't spoil it all, but does include a character falling face first onto a rock, which then causes their face to implode in graphic detail. This moment actually led to murmurs of disgust from the audience of the screen I was in. On a side note just as the film was starting a family including two very young children came into the screening, before a staff member swiftly led them out. As this is an 18 rated film I think moments like that might have scarred the kids! Some of the horror parts were maybe the weakest bits though due to corpses which never seemed very realistic to me. Moments when characters show up dead had less of an impact for me when I was struggling to make out exactly who the corpse actually had been. More than a horror this has been seen by some as an analogy for toxic relationships. Christian is a terrible boyfriend, going through the motions when it is obvious he could hardly care less about Dani, such as when he forgets it is her birthday, can't recall how long they have been together, and the disinterested way he reacts to her extreme grief she has. For Dani, her experience in a way gives her the acceptance, love, and empathy she needed, and which she was not getting at all from her boyfriend, or his friends who mostly see her as a burden.

I figured I would struggle to write this review but I am actually running out of space. With the characters; I found Dani to be an interesting protagonist, the rest were all self centered people in their own ways, though that was the point. Poulter plays the comedy character, and he did have some genuinely amusing moments (such as the way he gets when he is on a mushroom trip, and the whole incident when he unknowingly urinates on the communes sacred burial site). Some of his moments were also a little bit distracting. Often the comedy comes from the supreme awkwardness of the things that are happening, with Aster saying he was inspired by the great Chris Morris (Jam, Four Lions) for the humour. I thought the villagers were uniformly great, the costume design is fantastic (the May Queen dress is something to behold) and really makes them stand out from the visitors. The fact they speak Swedish and the protagonists don't just adds another layer of unease to the strange goings on. This does at time feel quite similar to The Wickerman, but certainly is different enough to be its own creation. All the way from the dark opening, to the powerful and strong end this was a mesmerising movie that had me hooked.