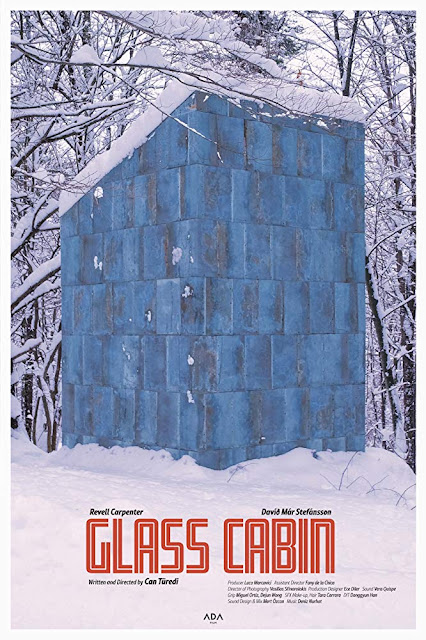 Glass Cabin is a short 14 minute psychological horror that comes from Can Turedi who both directed and wrote this. It was executively produced by Maya Korn who has been touted as being a young up-and coming producer of horror and genre films, and it was produced by Luca Marcovici. This short attempts something a little different by never explicitly stating whether the horror unfolding onscreen is actually real, or if it is just assumed by the protagonist.

Professional tennis player Scarlett (Revell Carpenter) is away at a remote snowy retreat to get in some uninterrupted practice. One evening a groundskeeper named David (David Mar Stefansson) arrives at the house to help her set up the wi-fi, his behaviour immediately creeps out Scarlett. A day or so later the man once again appears at the house unannounced, and she begins to suspect that he has hostile intentions...

There are many elements here designed to make this seem like a horror, yet the build up of the atmosphere means that the first ten minutes of this nothing bad actually seems to happen. This time is spent showing how isolated Scarlett actually is, while giving enough signs that something is not really right. The score sounds like something straight up from Hereditary, all screeching violins, and suspensful beats that feed into the desolate frigid surroundings. A glass house is something that can't help but invoke paranoia due to the contrast between the lit interior and the dark exterior.

Due to the way this is set out it is ambiguous just what is going on, I could see this from the two perspectives, it is easy to see this as a home invasion film, but also one more psychological in nature. That did lead to a slight issue for me in that by keeping this a mystery it means that not much actual horror can take place. It is a slow build up but much of the tension comes from the music, with what is actually being shown on screen not that creepy. There are moments for sure, and it is done in such a way that you can relate to the idea of a scared woman fearing the worst about a young strange man dressed in black appearing at her house.

While there was a slight feeling of dissatisfaction by how this ends I did appreciate what was gone for here. The location was fantastic, and the weather really added to the atmosphere, while both the two main actors did good jobs. The sense of isolation is palpable here, and that is perhaps Glass Cabin's greatest strength. Glass Cabin had its world premiere at Screamfest LA on October 13th.

Posted by Daniel Simmonds at 15:23