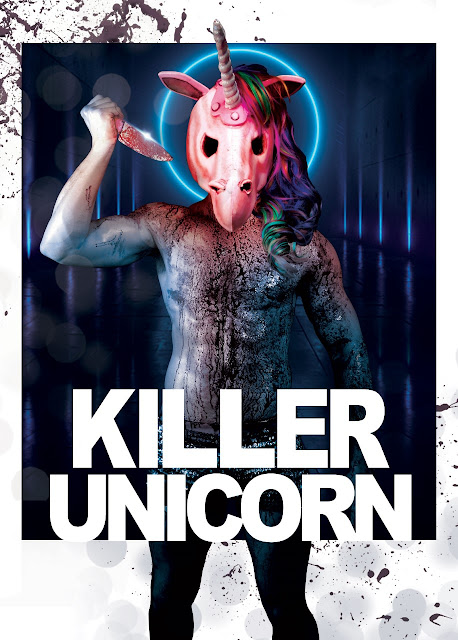 I admit to not being that sure what I would think of slasher Killer Unicorn. A hot pants wearing killer targeting drag queens sounded a little bit out there. Rather than try to make this subject matter serious there is instead a line of humour throughout that plays to the self obsessed and vapid cast of characters.

It is nearly a year to the day since Danny (Alejandro La Rosa) was attacked by an unknown man who drugged his drink at a gay bar, before being saved by his friends who left the attacker for dead. Now there is a unicorn mask wearing killer on the loose (Dennis Budesheim), who has started killing Danny's friends off one by one. He soon begins to realise this unicorn killer's main target is him, and that if he is to stop the killing he will have to confront this demon from his past.

Unsurprisingly for a film about drag queens this is quite a camp film with all the characters acting and speaking with exaggerated gestures. With their unique make-up (costume design and make-up are a highlight of this) and the locations that are mostly made up of various gay clubs this has a strong visual design to it. The cast of conceited and self absorbed people make for some amusing moments as no one is treated seriously. These are people who walk right by corpses without even noticing them, and whose immediate thought upon seeing a blood soaked victim is that it is a 'new look' the person was going for. From the very beginning the films tone is set out, particularly with a fun intro credit sequence that has all the actors and the characters they play introduced via a series of text messages in a group chat they are all in. It can be exhausting at times with so many dramatic acting people but leads to some humour such as when someone comments "that's a really cute look for a killer".

The killer himself has a memorable look, sparkly hot pants, a pink unicorn mask, and topless, yet able to walk around without managing to stand out to any randomers. I did like the killer never removes his mask, and never speaks. While muscular, he wasn't a huge intimidating presence, but managed to give off a slight Michael Myers vibe with the methodological way he goes after people. His main weapon is a knife but there are various unique ways he kills his victims, some which are a bit gross (death by an acid enema, and drowning someone by urinating in their mouth), and my favourite which was strangling someone by using someone else's severed arm to do so. A lot of the kills are over all too briefly, or don't really look that effective, on occasion you get to see a little more, such as when someone is beaten to death with a metal pipe.

Killer unicorn aside the characters here are all one dimensional stereotypes, as such there is no one to root for, even the protagonist Danny became irritating, most these people are more concerned with alcohol, sex and drugs than their own wellbeing. This is mainly due to the plot, with characters killed over several days it was bizarre there is never any sign of the police outside of the prologue death. At one point Danny even finds a severed head in his cupboard, but not only reacts in a low key fashion, but then comes up with a really dumb plan that results in the body count drastically increasing. The plot was pretty weak and just led to lots of people running around acting stupid, and making idiotic decisions. With Killer Unicorn there was an opportunity to really explore the scene shown in a serious manner, instead you get a bunch of characters who are somehow even more unbelievable than your typical teens in a slasher. The film never takes itself seriously, I would even call it a comedy horror, but it was still a shame there is often barely any semblance of horror here.

I didn't know what I would make of Killer Unicorn, but at the very least it doesn't outstay its welcome, with a 75 minute run time. I found this to be mostly inoffensive, it is bright and full of good design, but the kills themselves are often over a little too briefly, while more could have been made of the killer. With a better plot, and more sympathetic characters this could have been something better. As it is it was enjoyable enough as a distraction from reality, but nothing more than that. Killer Unicorn is now on DVD/VOD thanks to Indican Pictures.