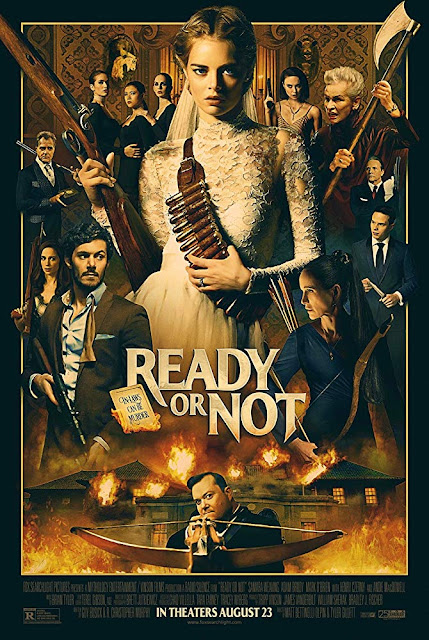 I have a bizarre problem with new horror Ready or Not (co-directed by Matt Bettinelli-Olpin and Tyler Gillett whose previous work includes segment '10/31/98' on V/H/S as well as Devil's Due) in that I find it near impossible to remember what the film is called! In my head it is called Hide and Seek as that is the title that comes to mind whenever I think of this. I can only imagine that title had been taken for them to call it Ready or Not. As an aside, when I was looking this up on IMDB just now the title I used to search for it was inadvertently Here I Come. Thankfully the title is near enough the only thing I have an issue with in this entertaining comedy horror.

It is Grace's (Samara Weaving - The Babysitter) wedding day, with her due to marry Alex Le Domas (Mark O'Brien - Bad Times at the El Royale) whose eccentric family are very wealthy due to the board game empire they have created. Alex had been away from his family for some time and so most of them are none too pleased that he has come back with a woman in tow. The couple are married at the Le Domas's family manor and all appears to be going well. That evening though Alex reveals to Grace that it is tradition that she play a game with the family at the stroke of midnight. All she has to do is pick a card from a family heirloom and play the game that the card reveals. She picks 'Hide and Seek' which unknown to her is the worst possible choice. The members of Le Domas believe a legend that an ancestor of theirs made a deal with the devil, the deal being wealth and success in exchange for a ritualistic sacrifice of any new family member who draws the 'Hide and Seek' card. While Grace sets off to hide in the mansion (thinking it is all a game) the family unknown to her tool up and set out to find and kill her before dawn comes. 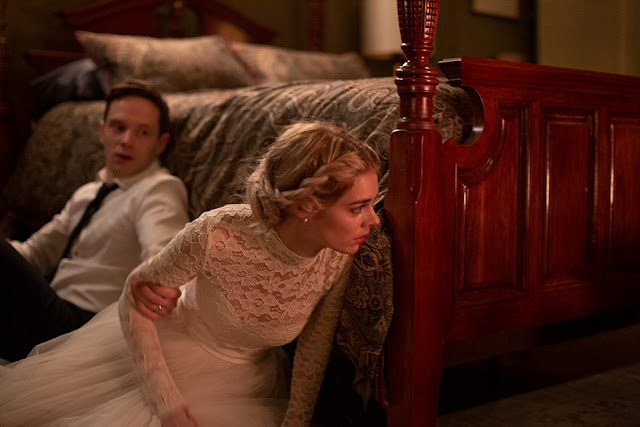 I was expecting this to be far more of a horror than it was, instead this has a heavy dark line vein of black comedy running all the way through it. Thankfully this comedy nearly always hits, with many moments that were laugh out loud. The whole way this played out reminded me very heavily of 2011's You're Next. In both movies you have a rich eccentric family meeting for a special occasion. Both films feature a lot of dark comedy that stems from the various family members weird personalities, and both films feature accidental death, and one of the characters turning out to not be on the side you think they were originally on. The biggest difference is that You're Next is home invasion with the family the victims, while here with Ready or Not it is the family who are hunting down the stranger.

It was pleasing to see this had an 18 certificate, but the humour removes any of the potential for scares, but led sis result in some very funny moments. Such as Fitch (Kristian Bruun - Orphan Black) being given a crossbow as his weapon, then later shows him desperately searching YouTube for how to actually use the device, and the coked up niece who in her eagerness to get Grace keeps accidentally killing the wrong person. The 18 certificate comes from the violence, and this is a very bloody film, on at least one occasion a character literally explodes into blood and gore, while several characters get shot in graphic detail, and get facial trauma in ways that always have great special effects and make-up effects. Plus on one occasion a child gets punched squarely in the face which was hilarious (within context). There are some scenes of pure horror, a memorable one being when Grace falls into a pit full of rotting goat carcesses, quite gross. 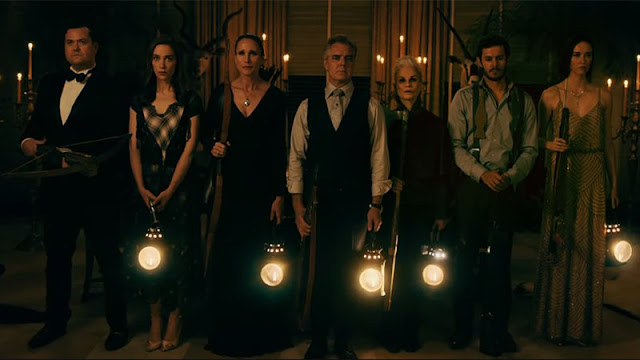 It was no surprise in terms of the main plot of Grace being hunted due to a prologue that showed Alex and his older brother Daniel as children witnessing a similar situation. Being trapped in the mansion I was also reminded of the first The Purge movie in that anything seems to go. Whether the pact with the devil was actually real or not was one of the main hooks, again this led to some amusing moments. There were not too many surprises, but it was always fun to see the dynamic between the various characters, the outer family on board for the killing but highly inexperienced, while the inner family really get to act over the top with father Tony (Henry Czerny), Aunt Helene (Nicky Guadagni - Cube), and the very loyal butler Stevens (John Ralston - Bitten) being the most intense, and often amusing ones. Stevens in particular was a great character, whose loud humming to classical music fed into scenes on more than one occasion. Daniel (Adam Brody - Jennifer's Body) had the most depth to him, torn between family loyalties and doing the right thing. Weaving was a good protagonist, while her character wasn't too deep she was a good vehicle for the audience to root for, and I loved how 'battle damaged' her wedding dress gets throughout the film.

I'm originally writing this the day after I saw the film, so I apologise for the poor quality of this review. I hope though that you can at least tell of my enthusiasm for Ready or Not. This had a very witty script, some fun characters, and rolls along without ever becoming boring. It never does too much to really stand out on its own, but when it is this well made that isn't too much of a complaint.