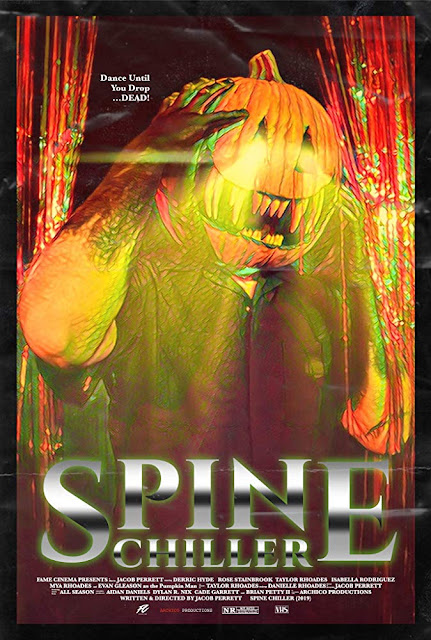 2018 saw the release of the indie horror anthology film Weird Fiction that I absolutely loved, despite some constraints from the budget that meant some of the mini-films included in it could be a bit low on quality. Well, director and writer Jacob Perrett is back with another horror anthology - Spine Chiller, that could be seen as a spiritual successor to Weird Fiction in that it is also based heavily in the eighties, and also has been 'aged' to make it seem like a lost cult classic. The quality of this new Halloween themed film is very impressive, though the plot I admit left me a lot confused, so apologies if my summary isn't completely correct.

Spine Chiller is set out much more like a traditional film, rather than have a host introducing the shorts. They are instead flawlessly edited in, so much so that on occasion it took me a while to even realise I was watching a short and not the main story going on. The main story is called Devil's Night and is about an urban myth of a serial killer who only appears around Halloween in a small American town, and who abducts his victims from the annual 'Spine Chiller' Halloween party held there. This one had some interesting ideas going for it, and I liked the idea of the victims having their faces removed by the abductor. It culminates in a finale that was frankly the best part of the movie, it really gave off vibes of Mandy with the protagonist (possibly Derric Hyde as Ryan) coming off like Nicholas Cage's Red Miller. It goes to some grindhouse places, anything involving a pumpkin mask wearing psycho armed with a chainsaw, in a grotty bathroom, as well as strangulation via intestines gets a rotted thumbs up from me! 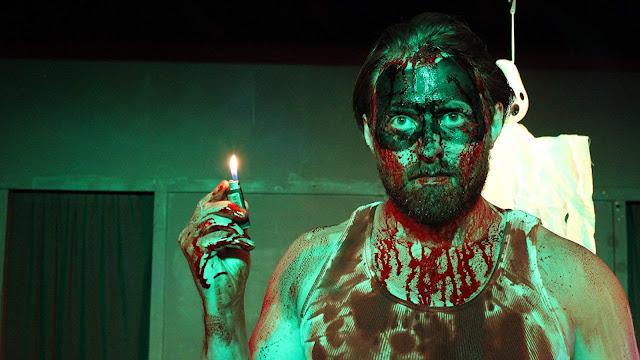 Don't Go In The Basement is the first short contained here. It features Isabella Rodriquez (Weird Fiction) as a housesitter who has been warned by the owners of the house she is at not to go into the basement. Curiosity gets the better of her, and after a series of incidents finds herself getting stalked by a knife wielding man disguised as a zombie. Due to the similarity of the prologue it took me a while to realise this was a short. This is also to its credit though as there is a large overlap with characters drifting in and out of the main story that is going on. This wasn't bad but it did feel like a slight retread of that prologue, and running around a house being slowly chased didn't make for something that was particularly exciting. I did like the killer though, his slow movements reminded me a lot of Michael Myers from Halloween. Spine Chiller as a whole takes a lot of inspiration from the look of that film, from horror movie marathons various characters are watching, to the whole way this is filmed, heck, it even starts with a camera shot from the perspective of the mask wearing killer. This again is no bad thing, I adored the look of this film, and the purposeful low-fi look to it, from constant film grain, to some muffled audio.

Next is Rotten Apples that follows a young couple - Tabby (Rose Stainbrook) and her boyfriend Devon (Matt Nale - Weird Fiction) who decide they are going to get revenge on unwelcome trick or treaters by tampering with the candy they have gotten for the occasion. Someone else is in the house though, someone who plans to give them a taste of their own medicine. This one neatly sets up the third act of the movie, but as a whole it again felt a little bit repetitive of the formula already shown in the anthology. 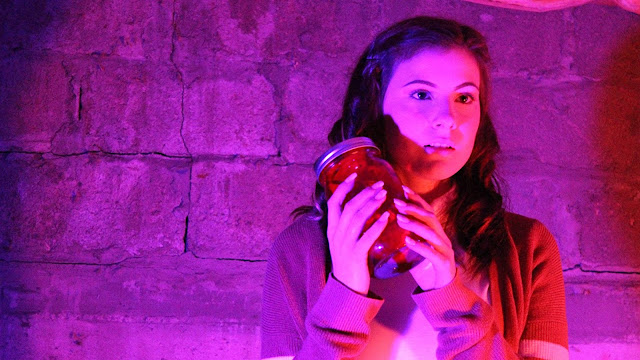 The final short is Baby's First Halloween and this one at last feels like something different. Chris (Taylor Rhoades - Weird Fiction) is excited to finally receive the wolfman costume he had ordered for Halloween, and excitedly puts on the claw part of the costume. However he soon discovers that he is unable to get the costume off of him, and soon he begins to transform into a monster himself. The general idea behind this reminded me of Clown, and features a scene that was like a homage to the classic transformation sequence in John Landis's An American Werewolf in London. Like the other shorts this does follow a format that felt slightly familiar, but again was very well made, and having the angle of a baby being in the house made the tension ramp up a bit.

As a whole I was almost split on Spine Chiller. Due to the quality of the directing, the great soundtrack (featuring a wonderful score from All Season), amazing make-up, decent special effects, and the editing and cinematography - I loved the look of this. The quality simply cannot be denied, impressive throughout, and far better quality than what Weird Fiction was able to offer. However I found the plot to be a bit hard to follow, I was never really too sure exactly what was going on. Rather than be a way for me to come to my own conclusions I just felt a bit lost, including a sudden ending, and even what the main plot thread was all about. This all led to my excitement sometimes being replaced with bewilderment. Saying that, if you are wanting to see a beautifully crafted homage to horrors of the late seventies and eighties you will get that with this, it is almost worth the price of admission alone.