We Are The Missing (2019) by Andrew J.D Robinson - Horror Novella eBook Review 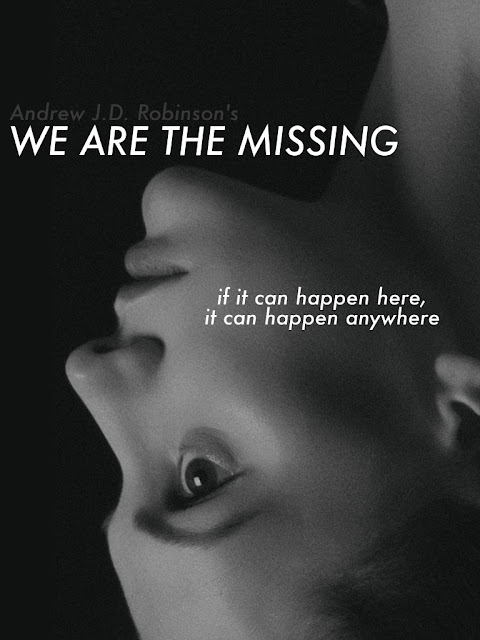 I know Andrew J.D Robinson for his thoughtful short horror films, such as the fantastic The Becky Carmichael Fan Club, and so when I received word that he had a self published novella coming out - We Are The Missing, I knew I had to check it out. I often skim read any requests I receive due to wanting to go into things with no expectations, so initially I was a little bit concerned this wasn't actually horror based at all. What starts off as a disappearance of a girl subtly transforms over 50ish pages into a kind of localised paranormal apocalypse.

The novella transpires as a series of accounts pieced together from notes and recordings found at the house of reporter Dylan Carter. Due to this format We Are The Missing is the second ever novel I would describe as falling into the 'found footage' genre of  written stories (the other being Michael Wehunt's chilling short story October Film Haunt: Under the House). So, as said rather than be told in a traditional story format this instead is mostly made up of interviews from the reporter and the various people he talks to, as well as his thoughts coming from his journal.

It all starts when school girl Riley Madison goes missing one day in the town of D'Arcadia. Despite a large search, no sign of her is ever seen. Carter interviews her parents Angie and John, as well as her best friend Mackenzie. Events gradually spiral with a spate of missing persons in the town, as well as a series of strange unexplainable traumas the townspeople suffer, from a huge increase in suicides, to an outbreak of mass hallucinations in which the sufferers claim to feel like they are being watched. With each new revelation of the horror unfolding the situation gets more and more out of control until the point that every single person in D'Arcadia is affected one way or another.

For a small novella like this I found the amount of ideas stuffed into this to be endlessly interesting. I most liked how elements from real life are used to help tell the story. There is everything from looking at the mass hysteria of the dancing plagues in the 1500's, to talking about the cordyceps 'zombie' fungus that infects ants, all the way to explain rational causes for why people might claim to have seen ghosts. All this added detail to the story, and grounded it due to the ties to real life that gave this a little bit more of a realistic feel to it, at least in the first half of the novella. By the last part of the book the story has gotten really out of control, yet the path to get here was so natural, a gradual progression rather than a series of stilted jumps.

This was all well written, though without having read anything of Robinson's before I assumed it would be. There are many horror elements here, some which work well, and others not so much. The most creepy parts were around the middle, when ghostly figures are seen more and more, there are plenty of different moments that felt a little unsettling. The more fantastical this gets the more the horror aspect subsides, but it still remained engaging. At times humour is put into some situations, and it didn't always work, but it was in limited enough supply that I didn't really mind. There was one section of the book that uses the analogy of the dead being compared to immigrants, while this is current with what is going on in the world it did feel a little bit heavy handed in the comparisons, and stood out from the rest of the style of the story a bit.

We Are The Missing was a well written, and interesting novella that impressed with just how much content was fitted into the story being told. I found the format of a series of interviews to be engaging, with conversations opening up more hooks to keep the reader wanting to know more. This manages to mix up moments of creepy ghost horror, with relatable real life horror, with even some cosmic horror ideas fitted in, all written in a way that made it so easily to visualise in my mind.