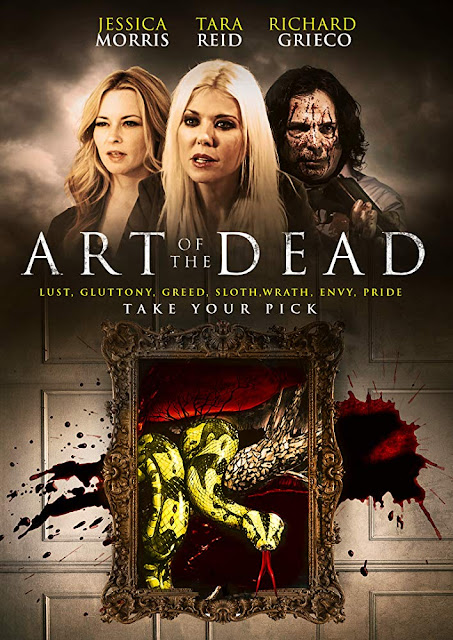 Art of the Dead is an indie horror film written and directed by Rolfe Kanefsky (Party Bus to Hell). Much like that one this features plenty of over the top acting, one dimensional characters, an entertaining plot, and some make-up effects that both look good at times, and bad at others. One part that unquestionably shines is the many paintings by Clint Carney that feature here. They not be masterpieces as the story asserts they are, yet they are still good and added a lot to the general plot.

Businessman Dylan (Lukas Hassel) and his wife Gina (Jessica Morris) purchase a series of paintings by a master 19th century artist (Danny Tesla as Dorian Wilde) in a charity auction. The seven paintings are of a series of animals and represent the seven deadly sins. The couple put up the paintings in their mansion, but unknown to them these hold a deadly power, able to corrupt victims into becoming the personification of each sin. The couples son, Louis (Zachary Chyz) and his girlfriend Kim (Alex Rinehart - They're Inside, The Black Room) happen to be visiting during the time of the purchase and soon Kim finds herself in a race against time to stop the paintings evil influences before it completely destroys the family.

Many aspects of this horror were cheesy, which isn't helped by a generally weak script. There were elements of the plot that especially later on led to me being taken out of the film due to the wild things that happen. Occasionally the story beats here are defeated by designs that make this feel a bit low budget, even if the ideas are nice enough. I loved the idea of these paintings corrupting people, and this was done in a variety of ways. Louis becomes the focal point of Dorian Wilde, whose brought to life in a very over the top way by Tesla. Each victim becomes exaggerated in how they act which in a film like this actually kinda works. Gina gets possessed by lust, Louis by wrath, the two young children by sloth, Dylan by greed, and daughter Donna (Cynthia Aileen Strahan) by envy. Each plays up to their sin in an increasingly dramatic way, with Donna in particular becoming a highlight to the growing mania, her scenes were always a delight to watch. The acting is never amazing, but at least with the concept this can be hidden. I found the protagonist Kim to be the most dull of the characters here, there just wasn't much to her character and compared to everyone else she just seemed a bit lifeless. The wider cast includes among its actors Tara Reid (Alone in the Dark, Urban Legends), Richard Grieco (22 Jump Street) and prolific actor Robert Donavan who were all used well in their small roles.

The horror element is present from the start. There was a fairly decent prologue that shows a man murdering his family while under the effects of wrath. It brought the idea of the paintings changing, an element I enjoyed. The paintings often come slightly to life, eyeballs move, there are sound effects applied, and they slightly morph. Sometimes a projection of the painting will be overlayed over characters, while there is a nice looking effect that shows a paintings eye-view of scenes. Not so good are the attempts to have characters physically change into their sins, Douglas turning slightly green for instance. These come across as silly more than anything. Then there are the monster designs, a reoccurring goat monster for instance never looks anything less than artificial and so any fear for this creature was immediately destroyed, it's also best not to even mention the snail monsters that turn up later! Again to counter this there are just some great ideas here, I loved the way the paintings match up, and I loved the inventiveness of their use, such as having people get captured by them and then show up as parts of the painting itself. 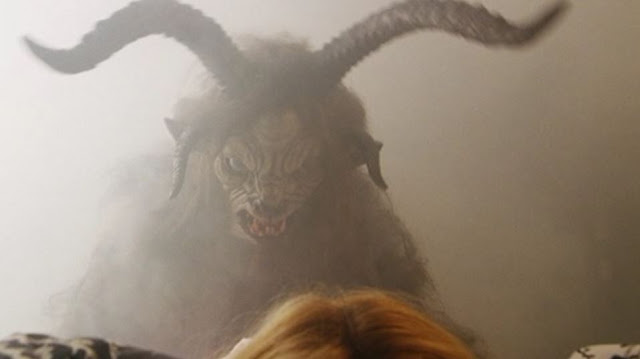 While creature and make-up effects for transformations are nothing special at all I did think the special effects for more traditional scenes of violence worked well, I loved how the trauma looked, such as a shard of glass embedded in someones back, and a fantastic looking part where a character is nearly decapitated by an axe. The directing felt a bit safe in that there wasn't anything too memorable about it, or about the cinematography. There was some nice lighting here though, and the soundtrack fitted the vibe of the movie well. While I had plenty of issues with how the story played out I still couldn't help but like the idea of these evil paintings.

Art of the Dead, much like Party Bus to Hell is decent enough if you accept it for what it is. It is a low budget horror that isn't meant to be over analysed, instead it is some simple entertainment that viewed in that regards succeeds. You keep your expectations in check and this can be a wild ride that at the extreme least has some cool looking paintings to look at.