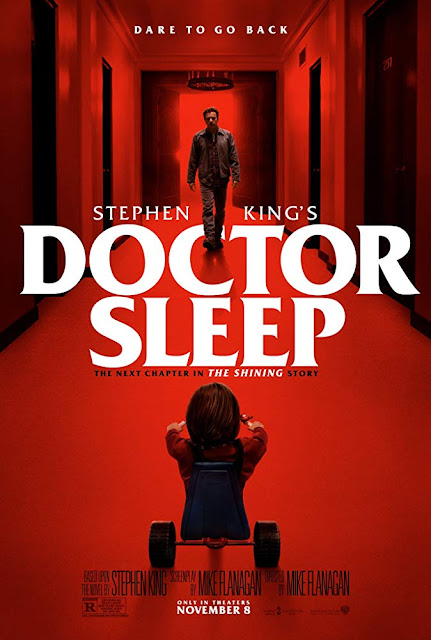 I try my best to watch any horror film that plays at the cinema. While most the stuff I review is what people have sent me, I do like to watch horror on the big screen when I can. I wasn't particularly feeling Doctor Sleep though. As I have stated on many occasions I don't really think the works of Stephen King are that great (I am trying to read more of his stuff though, currently a quarter of the way into Needful Things). I also don't think The Shining was as stunning as it has been made out to be. I think Stanley Kubrick is an astounding director, but that film just couldn't match the expectations I had for it when I first saw it many years ago. Doctor Sleep is a sequel to that movie specifically, even going as far as to include a remade clip or two from it, and with horror director Mike Flanagan (The Haunting of Hill House, Hush) at the helm it was in good hands.

Danny (Ewan McGregor - Star Wars: Episode 1 The Phantom Menace, Trainspotting) is a recovering alcoholic haunted by the experience he had as a kid at the remote, haunted Overlook Hotel. Now grown up he lives in a small American town where he works as an orderly at a nursing home. A young girl named Abra (Kyliegh Curran) psychically contacts him one day, as the pair both share the 'shining' ability, that gives them access to a whole host of psychic powers, from astral projection, to mind reading. Abra has discovered there is a demonic group of travellers that are led by a woman called Rose (Rebecca Ferguson - Life, The Girl on the Train). This group travel around America searching out children who can 'shine', in order to kill them and consume their light. Eventually Danny is convinced to help out Abra to try and put a stop to these dangerous people. 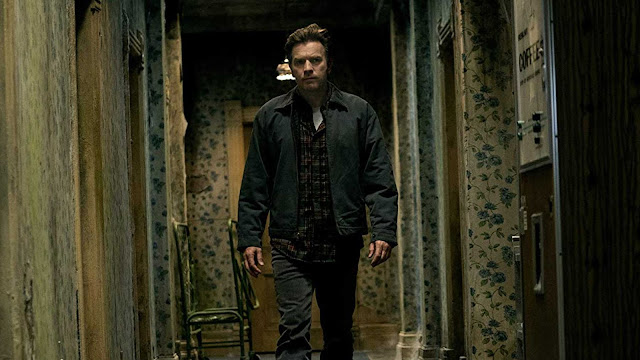 I found quite a bit of Doctor Sleep to fittingly be quite dull and tiring to watch. I put most of this down to me though, I was not in the right mood to be watching this, while the film being over two hours in length couldn't help but make me feel like there could be better ways to spend my last day off before returning to work. Thankfully the second half of this has much more going on in it, and while I was still clock watching I was able to quite enjoy that part a lot more than the first. While this is a sequel to The Shining it is a brand new unrelated story. The most carried over is how much trauma Danny experienced from that time, and how it has shaped his life. No actor from the first film appears (aside from unrelated background characters) but the characters themselves do, from Danny and his Mum, as well as the various ghosts of the Overlook Hotel that mostly appear in flashback sequences (even Jack himself, though not played by Nicholson). As the trailer shows the Overlook Hotel itself makes an appearance, and I don't know if it was just nostalgia but I loved returning to this place, the part that most delighted me and what kept me going throughout knowing it would turn back up at some point.

I liked the antagonists here, I found them interesting enough, though they were not scary characters. Being the focal point Rose was the best one, played wonderfully by Ferguson. The rest don't have a lot to them, and that is the same for the protagonists with Danny and Abra being the focal point and side characters not having much to them. Of these two Danny was by far the more interesting of the two, but then he has a better backstory to him, I liked how flawed he was made to be. A lot of the visually arresting moments comes from the dream sequences which were always attractive to look at and feature some Inception style effects, such as the floor becoming a wall, as well as floating sequences. The soundtrack included the familiar The Shining main theme which I welcomed, and also had its own main score that resembled a kind of deep heart beat sound. 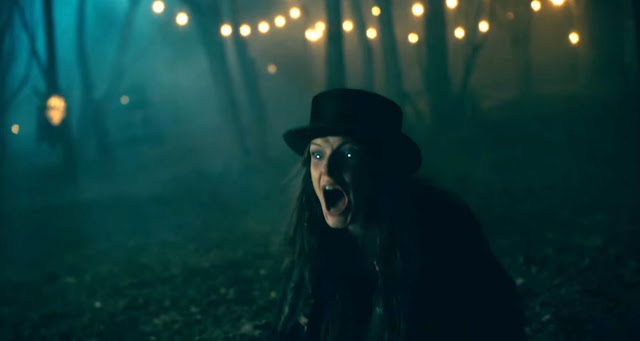 Doctor Sleep is very well made and features some good performances, and some good special effects, but it never really appealed too much to me. Maybe it was not having a lot of love for the original but I found the story here to be decent enough, but it hardly felt that original. There are plenty of great moments peppered throughout, and it was cool getting to revisit such an iconic location as that hotel, but for a lot of this whether it was down to me, or the film itself I was impatient for it to end so I could get back to the real world.