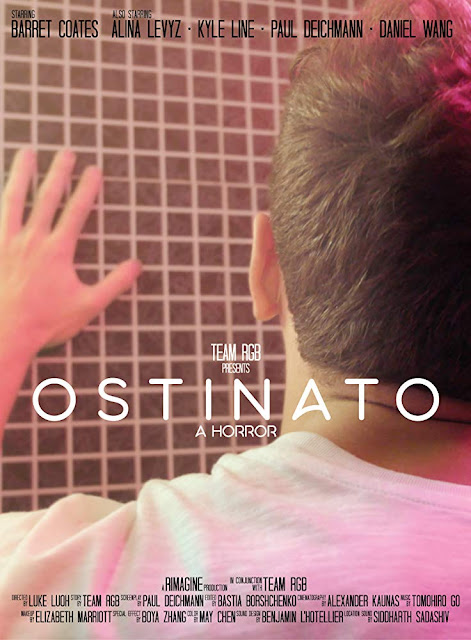 Ostinato is a short horror that runs at just under six minutes. It was completed through the 48 Hour Film Project - Shanghai, and was directed by Luke Luoh who also collaborated on the writing of this. It has also won a few rewards at the October 2019 edition of the Independent Shorts Awards.

Barret Coates stars as bartender John Fields who appears in two different settings here. The main part of the film has John repeatedly seeming to hallucinate that friends of his keep killing him. Wherever he goes he gets these violent visions, but just what is really going on? The second part has John in a white room directly speaking to the camera, these appear a few times edited within the other story.

So the mystery here is just what is happening. Within the six minutes this is clearly revealed with a third act twist that is kinda similar to a certain film involving a clown. I liked the variety on offer here, from being smothered with a pillow, to getting his throat slashed open, and even death by beer can, the effects were good, especially considering the time constraints. As part of the project the creators were in, not only did they have only two days to make this, but they had some other weird constraints in the form of a character, prop, spoken line of dialogue, and genre they were forced to go with. That these elements are integrated smoothly was impressive.

Ostinato is a well made short that features some nice editing and directing, a solid cast of actors, and some good ideas. It is also quite twisted, especially towards the end with the distorted music and the explanation of what has been occuring. With something this fun created in just two days it would be good to see what the director could come up with in a larger time frame.