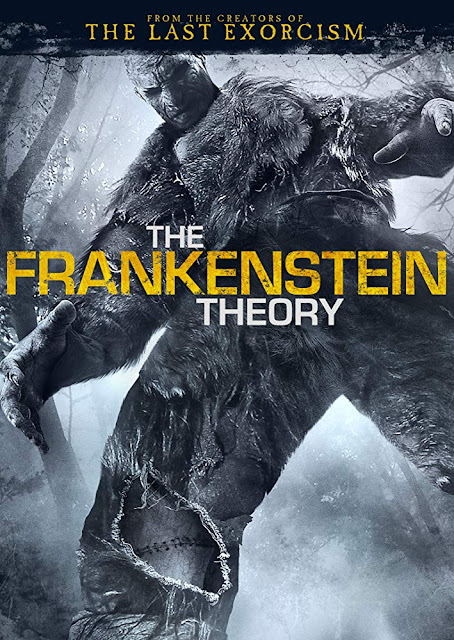 I love getting recommendations as it really is an opportunity to see something I would have otherwise missed. Back in July when putting up my review of the anthology film Tales of Frankenstein I received a comment on my Facebook page from Mikal CG saying I should check out the Andrew Weiner directed movie The Frankenstein Theory. This is a found footage horror with a premise that had me hooked right away, having seen it, it does suffer many of the pitfalls this type of movie often brings with it, yet I also found the setting, and the mystery to be worth the watch.

Professor Jonathan Venkenhein (Kris Lemche - Final Destination 3, Ginger Snaps) has become obsessed with a theory that most people thinks is insane. He believes that the novel Frankenstein by Mary Shelley was actually an account of a real life event that was disguised as fiction. This wild theory of his has caused him to be kicked out of university, as well as put a strain on his relationship with his girlfriend. In a last ditch attempt to show the world he isn't crazy he has put together a small film crew, and with them decides to head up into Antarctica in order to get documented proof that this creature does in fact exist...

I loved the idea behind this, within the context of a found footage it really was something different. With found footage though the more believable the acting, and the more believable the footage is, the more creepy it can feel. It starts off well enough with the traditional text on screen giving the set-up, but then it doesn't explain just how this footage came to be found and pieced together. Either the footage can just be shown as it was without context, or it can be edited together to make a cohesive story with an explanation given. Here it is the later, the story flows naturally, there is text on screen to indicate whenever it is a new day, yet it has some artistic licence with the inclusion of music playing at times. Music by Beethoven appears at a few points, while music plays out over the end credits. It fits the film well, and makes for a good ending, but I couldn't help but be removed slightly by wondering just who decided to add music to what was a tragic event, while they were editing the footage together.

After that brief rant back onto the film itself. This starts with an interview with Venkenhein, something that due to the story was needed. This part mostly creates reasons for what is going to occur, and adds background to the characters of Frankenstein, as well as how this character fits into that story. The film roughly takes place over seven days, the first couple have him, and his film crew - made up of a sound guy, two cameramen, and an interviewer, Vicky (Heather Stephens - Lost Highway) slowly making their way up to the wilderness they choose to explore. Along their travel they interview a meth head, as well as collect a no nonsense guide, Karl (Timothy V. Murphy - Westworld TV series, Sons of Anarchy TV series). I did like how most characters the main cast encounter are nightmare people in their own way, starting off with a very angry pedestrian they nearly hit with their car, to the meth head they interview, and even random background characters. Despite the remote location they end up at I found it easy to think that possibly one or more of these characters was the actual cause of the off screen mischief. I would of, if not for the fact the DVD cover features what looks to very much be Frankenstein's monster. 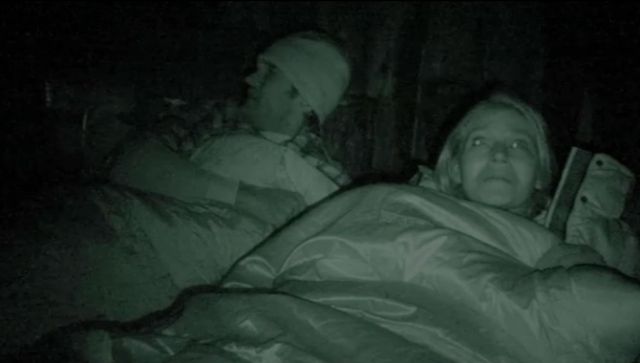 The Blair Witch Project proved that you don't actually need to show anything to make a film that is genuinely scary. Here the same is attempted for a portion of the film. Most the encounters with whatever it is they find occur away from the front of the camera. The group constantly hear monstrous growling at night, a figure is picked up on camera a few times, but always in the distance, then when people are attacked it happens away from the camera (though kudos for the screaming and snapping noises). This helps in building up the tension a little bit, but I didn't find any of it particularly scary. It was unique to have such a vast empty location used, but I never really got the feeling of isolation that the setting should have evoked. This falls quite a bit on the traditional found footage tropes, so we get a little bit of shaky cam (though not too much), plenty of night vision footage, and strange discoveries such as a mound of bones, and the crews snowmobiles getting attacked in the night. I had hoped for more sightings of the creature itself but understand why this didn't happen.

The biggest problems I had with The Frankenstein Theory were to do with some of the set-up itself. While they try to explain it within the story I felt it was a bit unrealistic that the crew would just so happen to pick the exact section of wilderness that a creature inhabits. I liked some of the plot points here, such as the order of who gets picked off first, and the acting was always perfectly fine. I wish this had been more scary though, still a great idea for a found footage, and looking past the faults this was still an enjoyable old school found footage.

Posted by Daniel Simmonds at 06:02