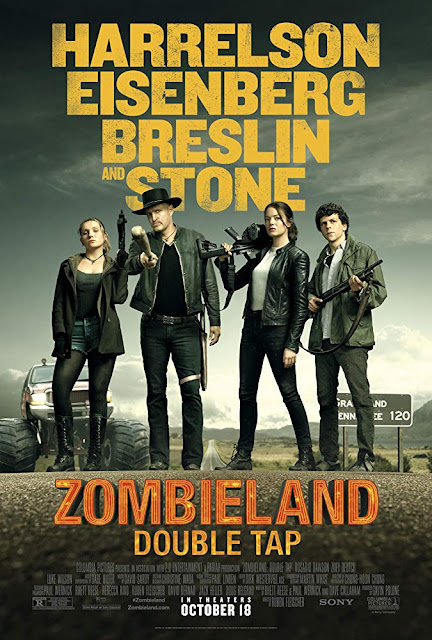 Zombieland came out during a time when zombies really where in vogue, nowadays they seem to have slightly slipped off the radar a tiny bit. The movie was quite funny, and well made, but after a TV show based on it failed I really didn't expect there to ever be a sequel. To celebrate the ten year anniversary a sequel has indeed been made, and it brings together all the original cast members, as well as director Ruben Fleischer (Venom, 30 Minutes or Less). Zombieland: Double Tap isn't something I had heard much about, so when I went to see the film I was expecting to be disappointed. While it doesn't do much differently to what came before it was nice to reunite with all these old characters.

Ten years after zombie apocalypse, and ten years after the events of Zombieland, survivors Tallahassee (Woody Harrelson - War for the Planet of the Apes, Natural Born Killers), Columbus (Jesse Eisenberg - Batman v Superman: Dawn of Justice), Wichita (Emma Stone - The Amazing Spider-Man), and Little Rock (Abigail Breslin - Signs) are living a stable, if dull life at the White House. After Columbus proposes to Wichita, fearing commitment she decides to leave the group, Little Rock going along with her due to wanting to find people of her own age to spend time with. Around a month later Wichita returns with news that her sister has ditched her after meeting a pacifist named Berkeley (Avan Jogia - Shaft). Fearing for her safety due to the appearance of evolved zombies that are near indestructible, the group set out to find her, along with ditsy newcomer Madison (Zoey Deutch). 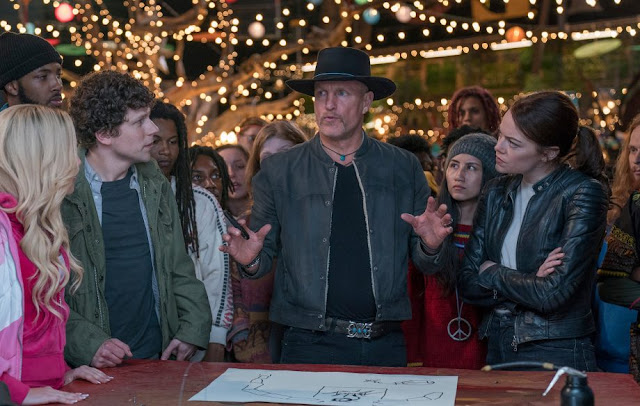 This is more of the same, but after a gap of ten years this really was no bad thing. The comedy hasn't changed which on occasion does make some of the jokes feel a bit dated. The format is also similar. Columbus narrates the story as it goes along, much like before, and for his character his many rules are still a focal point of a lot of the humour. I really enjoy these fourth wall breaking moments though, his rules physically showing up on screen (well CGI, but are able to be affected by stuff happening) were always amusing. The 'zombie kill of the week' awards are back, and even more crazy than they were before, this time upgraded to 'zombie kill of the year' awards. Occasionally the characters are left behind to then show a little skit of a random survivor killing zombies in funny ways, my favourite of these being one part set in Italy, not that I can say more as I don't wish to spoil the surprise. The movie starts the same way with zombie attacks playing out over a song, this time it has the group battling zombies in slow motion on the lawns of the White House as Metallica's Master of Puppets song plays. This was a very cool way to start things off.

It was neat to see the actors reprising their roles, and it makes sense due to this taking place the same amount of time later as has passed in real life. Everyone felt very similar to how they were before, especially humourous being the odd-couple relationship of nerdy Columbus and manly Tallahassee. There are a few call backs to the previous film, nearly all of which were smartly handled, this includes a fun after credits sequence that takes place before zombie apocalypse occured. The four characters are joined by a few others, including Rosario Dawson (Daredevil, Luke Cage) as Nevada, as well as Luke Wilson (3:10 to Yuma) and Thomas Middleditch (Godzilla: King of the Monsters, The Final Girls) who appear in one of the funniest sequences of the film. As is shown in the trailer those last two play carbon copies of Tallahassee and Columbus, so their interactions with them lead to plenty of funny moments. This larger cast of human characters was needed I feel to least add something new to the story, and they all fit in well, though at times Madison came across as a bit too irritating with how stupid she acted. The comedy comes from a mix of visuals and the dialogue the characters speak, a lot of it is funny, but occasionally jokes feel a bit dated. One example is the names they have come up for some of the evolved zombies, one whose evolution has made it even more dumb than the normal zombies has been named 'Homer' which doesn't feel that relevant nowadays. 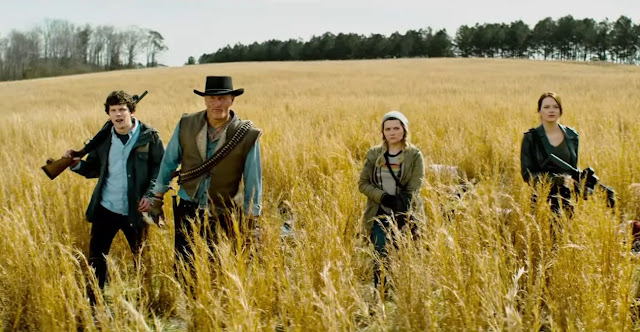 The zombies look great as ever and there is plenty of violence with the zombies showing up in increasing numbers, especially during the action packed, exciting finale. There is plenty of comedic death to these creatures with lots of zombie slaying throughout. This leans more towards characters hanging out than fighting zombies but when they do appear they make for some exciting sequences. On occasion it gets a little predictable, such as when it seems the protagonists are going to get killed only to be saved by a deus ex machina. Visually this looks strong throughout, I loved the directing, and there is some nice cinematography, with drone shots used when needed. The plot is not anything special, again taking on a kind of road trip feel, but it is just nice to hang out with these oddballs again.

With Zombieland: Double Tap I hoped against hope it would be good, but the trailers really didn't impress me. Thankfully this retains what made the original work so well. Witty dialogue and mostly amusing jokes, merged with undead battling and a strong visual style made something that while lacking the surprise of the original still worked well. Nostalgic for sure, but this was a decent sequel.

Posted by Daniel Simmonds at 03:55