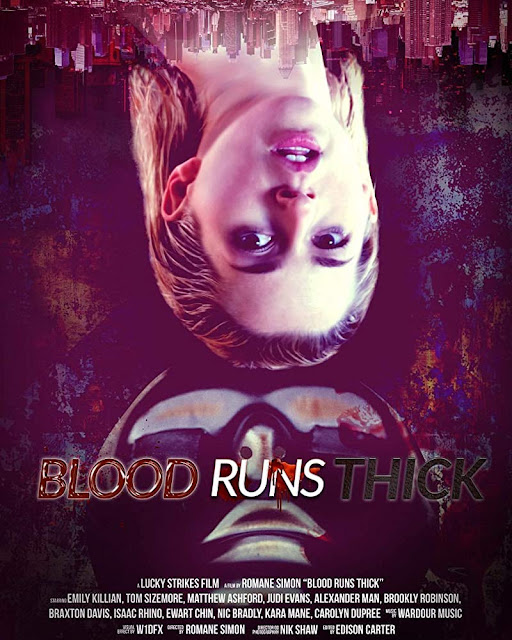 As I began to watch director Romane Simon's psychological horror Blood Runs Thick I realised I had seen the trailer for it a few years back. Having recently watched Hybristophilia, that was also directed by Simon, and written by Rhonnie Fordham I was interested to see how this one would turn out. Thematically this is similar in that it deals with the effect of early life abuse, but this one follows more of a drama led path rather than going down a more traditional slasher route.

Emily Killian (The Chosen) stars as Vikki, a troubled young woman whose mental health issues flare back up around the time that her lawyer husband, Marshall (Matthew Ashford - Species) goes missing. Her mum and stepdad decide to move in with her, and they bring with them an old high school friend of Vikki, who is now a psychiatrist. Vikki keeps having recurring nightmares of a masked figure attacking her in her home, as well as hallucinating a mysterious little girl, and so her friend hopes to help her work through her troubles and regain her life. 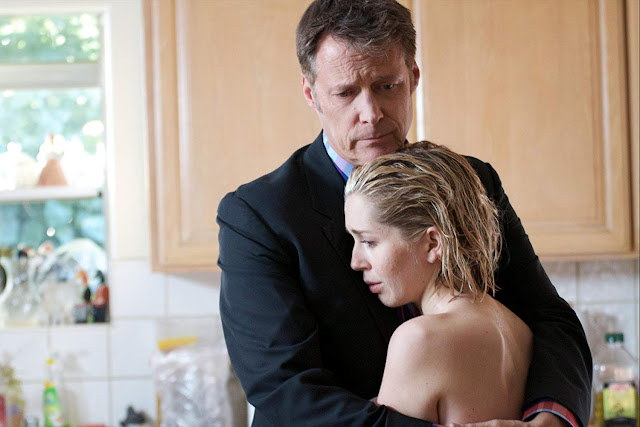 While there are similar themes and a similar style of filmmaking going on here I found this more intimate story to be a more involving one. The film revolves around Vikki and her struggles with her craziness which was portrayed well. Despite all the confusion of what was going on I thought Killian's portrayal of a woman losing her mind was a good performance, I liked how she reacted to the world around her. With the focus on her it does make other characters fade into the background a bit, her parents for instance were in the film for such a small amount of time that it felt like they were almost surplus to what was going on. The psychiatrist was a good character though, and I liked how he never comes across as that good at his profession, which is reflected in what happens throughout the movie.

At times there felt like there was a little bit of Dark Corners with the story being a bit confusing due to events happening being distorted to show Vikki's perception of the world. This is shown best during the waking nightmares she has in which she is suddenly thrust into her house at night with a masked figure hellbent on strangling the life out of her. I liked the transitions to these scenes and it left you constantly questioning just what is real. I for the longest time couldn't tell if these scenes were actually happening (a whole gaslighting subplot built up in my mind), or if the protagonist was as insane as she appears to be. Sure when the twist happens it wasn't surprising, but it was satisfying to see. I didn't really get the message of the film, outside of showing how traumatic past events can shape someone, and it seemed a lot of the characters here were victims of their own folly with how they acted to things around them. 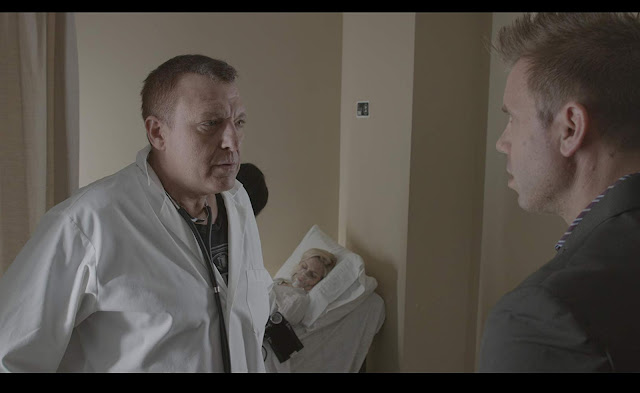 While this has lots of elements of horror, most specifically in the nightmare sequences, this was far more of a drama. Special effects are used minimally, but mostly do the job, though personally I would have liked to see more blood in some scenes. What I liked far more was trying to work out what has happening, and what was in the mind of the protagonist. There were a couple of nice looking fight scenes, though the lion's share of the film centres on the sessions between Vikki and her friend. With some of the more quieter moments I did struggle to make out what characters were saying, truthfully though I did have my washing machine running in the other room, and that appeared to be getting increasingly louder as Blood Runs Thick went on, so I can't say for sure if it was the film, or my surroundings that caused that problem.

While I didn't think Hybristophilia was amazing I did like the idea behind it, and it had some good moments. Here, taking a more dialled back and mature approach it was fun seeing how similar parts of Blood Runs Thick were to that one, such as the end credits montage of behind the scenes footage, to flashback sequences. At around an hour long this was maybe slightly too brief to tell its story in a detailed way, it would have been nicer to get more perspective from some of the side characters. I also thought the epilogue didn't really add anything, but overall this was a entertaining little psychological drama. Blood Runs Thick comes from Lucky Strike films, and can be rented or purchased here.