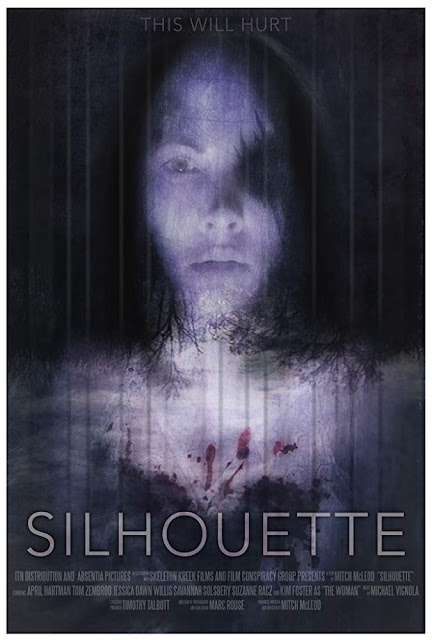 Silhouette is a dark drama written and directed by Mitch McLeod (Birthday Girl) that covers some uncomfortable topics. With a relatively small cast and a budget of $25,000 this succeeds due to the casting choices for the main leads, and the laser focus storyline of the disintegrating relationship of these two characters.

After the death of their young daughter who was suffering a terminal illness, couple, Jack (Tom Zembrod - Knucklebones, From the Dark) and Amanda (April Hartman - Howlers) move into a new property. Jack hopes the change will let them not only rebuild their lives, but also their failing, loveless marriage, but Amanda, still in deep depression from that past trauma is not at a stage where she can move on. Both are haunted by the demons from their past, Jack due to past mistakes he has made impacting the present, and for Amanda she is literally seeing demons in the form of the ghostly figure of her daughter.

Silhouette is not a film designed to set out and scare people, instead the horror comes from realistic trappings of a couple trapped in a doomed marriage. Both characters are flawed, even if Jack comes across as the more normal of the two. Amanda is mentally ill, on antipsychotics and living in a nightmare fantasy world in which existence is barely manageable. The traditional horror elements appear primarily around her, from the demonic ghost of her daughter, to the brutal dreams in which she stabs herself repeatedly in the stomach. I liked the blurring effects used whenever the ghost appears, and Hartman does a sterling job of being terrified of all the unexplainable things going on around her. Initially it seemed she would be the protagonist, but the film is split more evenly, especially in the second half where the camera follows Jack around, leaving Amanda in her miserable solitude.

With Jack you have a character who is more complex than he first seems, due to his infidelious nature it was hard to identify with him too much, but Zembrod creates a character who I came to pity. Obligated to be with his broken wife, but yearning for the things he feels he has missed out on in life, and for yearning for the feeling of that initial feeling of being in love he makes some bad decisions. I verbally chastised him at some points in this movie! Silhouette is a slow burn with huge chunks where it is pure drama. Starting off with a prologue hinting at a future event, that sees Amanda lying in a field covered in blood. This transitions into the main story that eventually gets more fragmented in a series of dream like flashbacks that cast shadow on the past actions of both leads. It shows how for both characters they can never really change, both doomed to remake the mistakes of the past over and over again.

The series of flashbacks in the past were created really well. I especially loved a sequence that was bathed in red light, in which characters spoke in unintelligible muffled voices, reminded me of the style of  David Lynch a bit. The special effects in general were decent enough, knife wounds look the part, with zoomed in shots to show the knife piercing skin, and plenty of blood to go with this. The sound design was good, and in terms of how characters speak they seem to get more and more quieter as Silhouette goes on. Starting off with shouting and screaming, by the finale there is barely any dialogue, and when there is it is all whisperings. This uses silence in a lot of good ways, silent scenes often show up, and play with just music over them, it made some of these scenes in particular really quite beautiful to watch.

With Silhouette you aren't going to get cheap thrills, or gratuitous violence and terror. Instead you have a somewhat slow burn drama that really shows what the impact of past events can have on people's lives, and how being unable to change, or talk can really doom a relationship. Not a happy watch, but one that will leave at least a bit of a lasting impression.