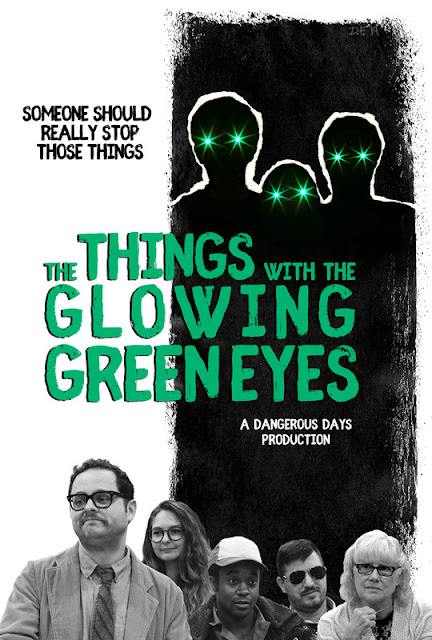 First there was The Childish Thing, then there was The Thing About Beecher's Gate, and now comes the third entry in Jeremy Herbert's Thing trilogy of short horrors with The Things With The Glowing Green Eyes. The previous films had both been of high quality and so after hearing about this one I was excited to see it. Herbert has stated about the film: "Every filmmaker gets a movie that won't die once in a while. This was mine. Lost locations. Missing Footage. Scheduling conflicts so ironclad we had to scrap a movie and reuse pieces of it in this one. It's somehow appropriate the depths to which this one dragged me personally and professionally given its subject matter."

During a weekly town meeting one of the few regulars; Bernie (Morgan McLeod - The Childish Thing, The Thing About Beecher's Gate) nonchalantly asks if anything is going to be done about the things with the glowing green eyes. This then leads to a series of short stories in which each of the other attendants admits to having also seen them, and then recounts their own personal underwhelming experiences with these strange visitors. 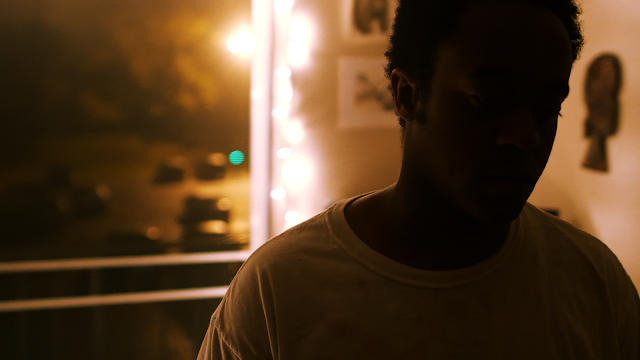 There has always been an element of humour to Herbert's shorts but this one was by far the most funny, so much so that on two occasions during the twenty minute run time I did laugh out loud. The dialogue here is just great for each of the characters, with each of the actors performances being spot on. From Daniel Allen as the calm and cool sheriff, to Daniel Alan Kiely as the timid mayor, they all delivered their lines with perfect comic timing. The fact that nothing happens in each of the four recollections was what helped to make this quite amusing. It was also nice to see Jenson Strock playing a part here, I last saw her in The Childish Thing.

While this is funny it still manages to come across as creepy. The titular things don't do anything except stand dead still, most the time you can't even really see them, their out of focus glowing eyes being the only visible sign of them. The situations characters find themselves would be scary in a normal setting, such as the sheriff out in the woods surrounded by the creatures, or Gail (Catherine Csyani) having one standing at the foot of her bed, but the fact these stories all end abruptly gives them a comedic feel. Ghost Stories used a similar idea a few years back of sudden endings, but that failed as it was trying to be legitimately scary and so the endings just created frustration. The music as always was fantastic, the soundtrack sounded alien really adding a layer of atmosphere to these unsettling goings on.

Based on the previous films I had a fair expectation that The Things With Glowing Green Eyes would be a solid piece of entertainment, and it is that. I saw the twisting of expectations that was achieved to be a fun idea, and with solid acting among the cast this was something wonderful. The fact that this had such a troubled production yet still morphed into an entertaining short is testament to Herbert.