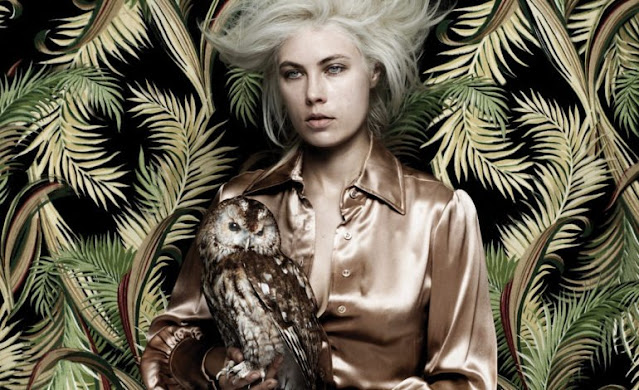 I don't often put up reviews of music albums and with good reason. Of course I love music, but I usually treat it as background noise for doing other things, typically nowadays for tidying my house. I certainly would never listen to something like Atmosphere's The Day Before Halloween, I didn't suspect it would be my thing. I confess to having never heard of them before, going by the press release, Atmosphere are an indie hip-hop group, made up of rapper Slug (Sean Daley) and DJ/Producer Ant (Anthony Davis), and have been going for around 20 years, coming from Minneapolis. They like to branch out from their typical sound and apparently new album, The Day Before Halloween is one such divergence.

In addition to a new album they have also released a film that was directed by Jason Goldwatch. This film plays out over forty minutes with the soundtrack being the group's album. Rather than being made up of original footage this film is a superbly blended mix of infomercials, soundbites, stock footage, interviews and more giving it a nostalgic feel. The wraparound story uses footage from the retro looking horror video game The Convenience Store and has an employee at a convenience store coming into possession of a series of videotapes. Each video she watches at her home features a different track from Atmosphere's new album, and its own unique set of neatly edited stock footage. It starts for instance with a series of static drawings of a child as he embarks on a drug trip. It soon becomes clear to the new owner of the tapes that the original owner desperately wants them returned.

First the visuals, this is attractive in its consistent design, everything about this feels retro, and I enjoyed how this old footage is affected to blend it into the overall feel the music provides. There is lots of drug imagery throughout, often edited together with other footage, such as ecstasy pills floating around in the background, or with stock footage of snowmobiles spliced with someone snorting cocaine so that it looks like the snow from the footage is what they are taking. It never feels overly trippy but there is something grimy and vaguely unsettling by the mix of the two mediums. Like the music itself this part got better as the film plays out. While the story element here is slight it occurs enough that The Day Before Halloween did feel like it was telling one rather than being unfocussed.

Onto the music itself. I don't know much about music, but I loved this album, it got better and better the more I let myself sink into the sound. I enjoyed it enough that I added the album to my collection on Apple Music, I am listening to it as I write this review. The music is chilled and laid back without being sweet sounding. There is an off kilter feel to it that often makes it sound quite dark without it actually being loud and angry. The horror element comes from the sound of the music that features plenty of synth and steady drums that never overwhelms, but becomes the driving force behind the rapping. Eighties synth sounding stuff is always going to appeal to me, the eighties really had the best horror soundtracks. It all ends on Sleep Apnea that to me was the very essence of the vibe this album was going for.

For someone who can't just listen to music and do nothing this was lovely to get immersed in. Since watching this for review I have seen it twice more, and must have listened to the album itself seven or eight times. The Day Before Halloween is out now, here will show all the various ways to get access to it. I will leave it to the press release to close out this review; 'It's menacing. It's murky. It's George Orwell meets Keith Haring at a video arcade, on New Year's Day, 1985.'

Posted by Daniel Simmonds at 08:33