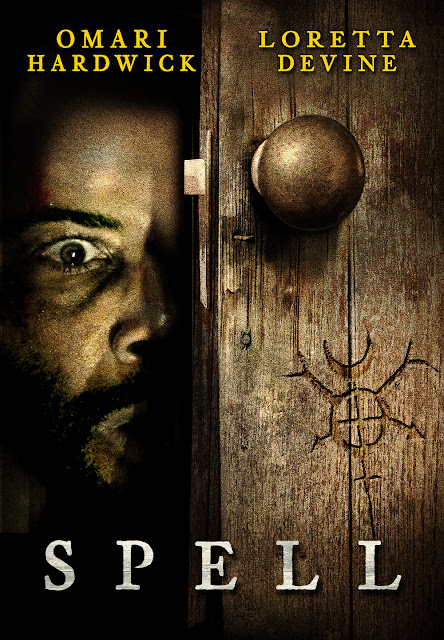 Halloween is my favourite day of the year and with good reason, it is my blogs version of Christmas. I am writing this review on that day, having just seen Mark Tonderai's (The House at the End of the Street, Hush) latest horror film, Spell. This was written by Kurt Wimmer (writer of the latest Children of the Corn movie). With the exception of one cast member this features an entirely black cast, which did feel quite unique with regards to horror movies.

Marquis T. Woods (Omari Hardwick - Zack Snyder's upcoming Army of the Dead, Kick-Ass) is a successful lawyer who feels like he has made it in life. He has a very well paid job, a beautiful wife, and two children who will never have to experience the trials he did during his troubled childhood. He receives a phone call one day and learns that his estranged, abusive father has passed away, Marquis, with the encouragement of his wife decides to head back to his childhood home of rural Appalachia to attend the funeral, and decides to get there using his private plane. During a thunderstorm he loses control of his plane and wakes up to discover himself in a bed in the attic of a strange woman, Eloise (Loretta Devine - Grey's Anatomy). She deflects all his questions relating to his missing family and promises him she will help him recover from his injuries, but it seems her intentions may not be as pure as she makes them out to be as Marquis soon discovers he is a prisoner in her remote home. 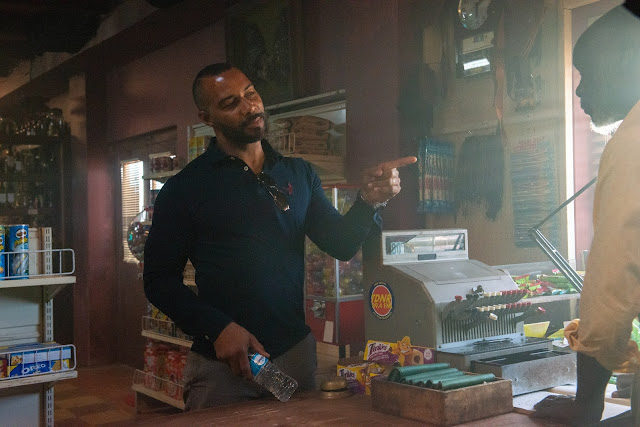 It has been a while since I saw a horror that was as unapologetically happy to reside in that genre as this one is. It gave me a real vibe of films from ten years or so back, and I don't mean that as a slight. Gone are all the jump scares and supernatural terror and instead this is an up close story about one man's attempt to escape the nightmare he has found himself in. Eloise is a practitioner of Hoodoo magic, her speciality being Hoodoo dolls also known as a 'Boogity'. This is a doll created in the image of the person it is for, even including blood, hair and other things in its creation. An early question being if there is any truth to Eloise's beliefs in the power these creations can grant the owner. The core rhythm of Spell is Marquis attempts to escape from the attic he is in. With this rural setting I was really reminded of one of the DLC expansions for the video game Resident Evil 7: Biohazard in which you have to try and escape a similar situation. A big theme of the movie as a whole is that of escape, and accepting your roots. Marquis had spent his whole life in his dogged pursuit to forget about where he came from, who he used to be. The message here being that you should never forget this, and that acceptance leads to greater strength.

There is a decent sized cast here but it is only a handful of characters who share the most screen time. I thought Hardwick was solid as the protagonist and while the character sticks to trope like behaviour he was one whose story I found interesting. Eloise felt far more of a generic character type, the way her and the other rural folk spoke sounded very cliche. Early on Marquis's son pokes fun at this, so it is a shame that this wasn't then changed to give the characters a more believable feel to them. Speaking of his family, I also thought it was a shame they get so little development to them, it is only really Marquis who learns lessons over the course of Spell. His character is treated the best, such as the fast paced and confusing flashbacks to his childhood that show the inner resolve he possesses deep down. By using an entirely black cast for the protagonist and antagonists it sidesteps any exploration of race in terms of white versus black. Instead it is more a rich versus poor examination. The rural people are looked down upon both by Marquis and his children with their views seen as outdated and simple, but Spell doesn't really do much to make a case for this being wrong. 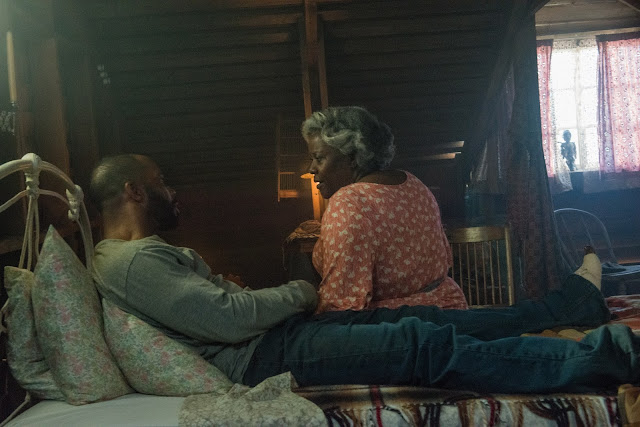 The set design was a highlight, in particular the Boogitys which look darn creepy. The special effects aren't bad, it was enough that one scene involving a large nail made me wince. The mild supernatural elements fitted in well enough that their appearances never felt out of place. The general storytelling made for an interesting feel, the viewer discovering only what the protagonist does, characters only existing if they are directly affecting his scenes. I felt that the finale seemed a little bit rushed, a lot happens in a little time, and some scene transitions left me scratching my head a bit with the random places characters were appearing at. The slowly building tension built up over the films run time is diffused with an action heavy conclusion.

Spell is a decent enough horror film, but I wish it had tried to be more of a social commentary than it did. Early on it seems to poke at some of this (such as a tense scene involving the arrival of a police officer, and outdated assumptions about how people are in the country) but then the movie just goes back to confirming these stereotypes rather than trying to challenge them. For what it was Spell was an entertaining 90 minutes, but beyond entertainment it doesn't really have anything new to say. Spell became available to download and keep and rent on 30th October thanks to Paramount. It can be found on a variety of services including Apple TV, Amazon Prime Video, Sky Store, Google Play and more.

Posted by Daniel Simmonds at 11:19